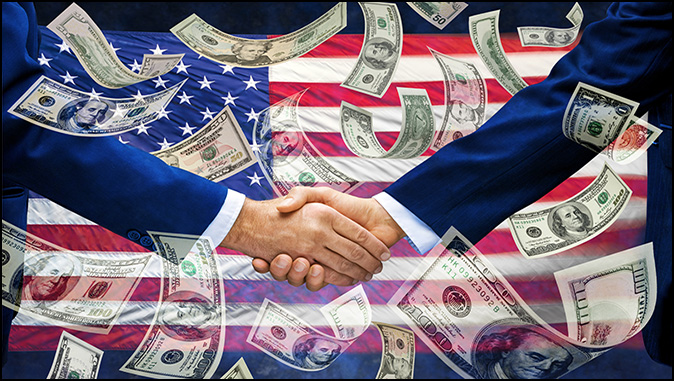 It is very easy to be labeled a ‘doom and gloomer’ these days for simply reporting the facts. “But facts are a stubborn thing”, John Adams once said.

Seemingly, simple problems for nations to solve often come with extremely complex strings attached. The United States is addicted to spending money. What does one do if they are neck deep in debt?

Well, for starters, you stop spending so much money. The muddy waters part is where to stop spending and which programs you are willing to cut that actually makes a difference.

The United States purse strings are ultimately being pulled in two different directions between the leftist and conservative agendas. Each side has their sacred cows they refuse to touch and will only do so at an excruciatingly high cost to the other. I realize I am staying vague here, but my intent is to show you the forest and the trees, seeing the picture as a whole, rather than just individual issues.

Our system has three legs of power that constitute the operational managers of a complex system of systems. The controlling authority actually being an architectural contract our founding fathers created (the Charters of Freedom) 242 years ago. The basic premise is that man does not guarantee our rights, God does. Therefore, rights are unalienable. The overarching theme is that governments tend to grow into overbearing monstrosities, thus, the checks and balances are largely against itself to prevent that from happening. This is done by dividing the governmental authorities into three branches, which then act as a system of checks and balances against each other, to prevent any one from becoming too powerful.

One branch has the responsibility to execute the duties of leadership and enact the laws and powers granted to it by a bi-house congressional legislative body. It has worked around the legislative body by creating a small army of un-elected techno/bureau-crats. It has ignored or bypassed the legislation to initiate warfare, emplace unconstitutional bureaucratic legislation (mandatory healthcare), and refused to enforce the laws that are already in place.

The other branch entrusted with creating the laws and controlling spending, can’t because it remains too entrenched in the pockets of special interest groups. The handful of actual honest and trustworthy ones have a difficult time getting anything passed either by committee or through house votes due to the divisiveness of the interests represented there. Both houses recognize the dire dilemma we are in financially, but can’t even agree on meaningful steps toward achieving that goal.

The last branch acts as the legal authority that enforces the laws of the land as an ultimate last resort of legal interpretation of the architecture otherwise known as the Constitution. The problem with this branch is, lifetime appointments that were meant as a safeguard against knee-jerk movements of the political climate of any given decade, also mean that they become defenders of ‘their’ interpretation we have to live with for most of our lives. Appointments, whether right or left, have long-term ramifications.

And to think we have the best system on earth? The problem with our system is that man is running it. Man is flawed and sinful, therefore, unable by default of ever having a system that actually functions as it should for any longer than a brief period of time.

Geo-political strategists often use terms like ‘red-line’ or ‘point of no return’ to signal events that once happen, can’t be undone. Like the proverbial bell that cannot be ‘unrung’, so to are the ‘red-lines’ that once crossed, forever change the geopolitical landscape. We (U.S.) have crossed that economic ‘red-line’ some time ago. We have put ourselves in such a financially distressing position, that most politicians and talking-head pundits would rather discuss things from a hole in the sand than deal with them honestly. Those who are honest are labeled ‘alarmists’. Is it alarmist to yell ‘fire’ in a theater if it is actually on fire?

We have crossed that economic ‘red-line’ and have no other recourse than to radically and fundamentally change the way we function as an economy. It has to change because there simply is no other way around the magnitude of the unsustainable debt we’ve accumulated. There are not enough years left on the planet to pay off what we owe, and by the way, we are not alone.

Budget cuts and austere fiscal measures are about as popular here as they are in places like Greece, London, and Spain. The choice will become, do we as a society agree to reduce the quality of life here in the good ol US of A, or do we keep things as they are, and go to a new system? I think overwhelmingly, most people will willingly authorize the use of another currency or system in order to keep welfare, medicare, Medicaid, and subsidies rather than lose all of them. Why? Because people still need to eat, see the doctor, and help pay the bills. People still need paychecks to own cars, put roofs over their heads, and put their kids through school.

So we are at loggerheads as a nation in that we have reached that point of both having unsustainable debt and an unwillingness to change our ways. Something will have to give, and I’m willing to bet that tweaking the Constitution is going to be sold as the least painful option. And once we go to a global currency (whatever that looks like) we will no longer control our nation. Don’t believe me that we are that close to doing it? Look at the chaos the world is currently enduring: a promising nuclear and genocidal Iran, a hermit nuclear nation ran by a 29 yr old, a burgeoning Russia and China, suicidal and maniacal jihadists, and 35 other armed conflicts currently ongoing in the world today and we want to SHRINK our military? Do we want to reduce the means by which we have to defend ourselves? Things must be a lot worse than anyone can imagine.

The big picture is that America is at that point where it is now willing to trade autonomy for security. Soon, we will be no different than Greece or Italy. We just have the best militaries right now, which is why no one is forcing our hand at the moment. But there is coming a day when all of our military might will not be able to stop the forces seeking to force us to become subservient in our role as the big stick in someone else’s hand. The wealth, power, and might of the US will come to naught pretty soon, and everything people have worked and slaved away for all their lives will seem rather irrelevant in the months and years to come.

Where is your treasure laid up? Is it in the next Ronald Reagan? Gold and silver? A 401K with stock options? This age is coming rapidly to a close. Our current system is unraveling faster and faster and if you’ve placed your faith and trust in your own ability to provide a long, comfortable life, you’re going to be disappointed.

Satan can see the storm clouds gathering, so he’s instituting his plans with greater swiftness and ferocity. The fact that we are becoming irrelevant is only relevant as it pertains to how close we are to the end of this dispensation. It is becoming more and more apparent, that the US will not have some kind of massive revival and repent as a nation again.

There is a reason why the Bible makes no mention of a great nation in the west in the last days. Regardless of how it happens, something does. We are as a nation, buckling under our own weight. At this point, super-committees and last-minute budget deals are as meaningful as rearranging the deck chairs on the Titanic.

“For God so loved the world, that he gave his only begotten Son, that whosoever believeth in him should not perish, but have everlasting life.” – John 3:16

The silver lining is that salvation is yours for the asking. You need only place your faith in Jesus Christ to change your life and your eternal destiny forever. Oh, and some sound spiritual advice is, you shouldn’t wait too long either. Because His return is a lot sooner than you think

What We Can’t Not Know

What We Can't Not Know By Pete Garcia Professor and author Dr. J. Budziszewski, wrote…

The Tin-Foil Hat Brigade By Pete Garcia You know who you are. You’re the person…

Pause for Effect By Pete Garcia "Be ye therefore ready also: for the Son of…

I Am Barabbas By Pete Garcia Since the second century A.D., there have been numerous…

For Such a Time As This