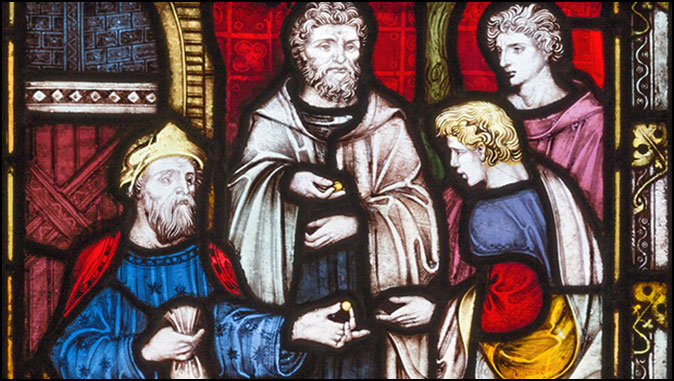 The Parable of the Talents
A Bible Study by Jack Kelley

The Lord’s use of parables always gets my interest. A parable is a fictional story meant to illustrate a principle or truth. The word parable comes from the Greek parabollo, which literally means “to throw alongside.” Aesop’s fables demonstrate a secular application of this teaching method.

The Lord Jesus wasn’t the first to use parables in His teaching, (there are many in the Old Testament) but He sure elevated their importance in communicating biblical truths to His listeners. I’ve heard His use of parables described as “putting a heavenly truth into an earthly context.” His parables often angered the religious leaders of His day because they got the point of the story, and it was usually critical of them.

What Does That Mean?

In interpreting a parable, remember that everyone and everything in the story is symbolic of something else. The key that unlocks the symbolism is found either within the context or elsewhere in scripture. One nice thing about the bible is that things used symbolically in one place are generally used in the same way through out. Leaven (or yeast) always symbolizes sin. Adultery and fornication always symbolize the worship of other gods; a spiritual unfaithfulness. Theologians call this the principle of expositional constancy. Observing these guidelines will help you correctly interpret parables and increase your overall knowledge of scripture at the same time.

So we have three guidelines in interpreting parables; context, scripture, and expositional constancy. Failure to follow them causes us to miss the point. For example, look at the way the Parable of the Talents has been interpreted, or should I say miss-interpreted. One problem is that talent is also an English word meaning a skill or ability. But in the Greek language a talent was a unit of measure, often defining an amount of money. Since everything in a parable is symbolic of something else, to think of the talents as symbolizing either skills or money is wrong, and really distorts the message of the parable. Instead, think of the talent as symbolizing something of great value to the Lord; something that belonged to Him, and that He entrusted to His servants while He was away. You can see that neither skills nor money correctly define the symbolic talents.

Now notice the time frame the Lord refers to. The word “again” in Matt 25:15 identifies the time of the story as being the same as in the previous story, the Parable of the 10 Bridesmaids. That parable begins with the phrase “at that time” so you have to keep going back all the way to Matt 24:21 and 29 to discover that the time about which He is teaching occurs immediately after the Great Tribulation, when He comes back to establish His kingdom.

What will the situation on Earth be at that time? Follow the parable. He will have been gone for a long time and will have just come back. He will have left some valuable property of His in the care of various servants, and some will have multiplied their share while others will have buried theirs. He is now requiring an accounting of them that will determine their destiny. The context tells us a lot, but what property of His is symbolized by the talents?

This is where using scripture to interpret scripture comes in. We know from scripture that money is not important to the Lord, and that His achievements are not limited by whatever skill we have and are willing to apply to accomplish His ends. But is there something of His, something extremely valuable to Him, prized even above His name, that he has entrusted to us, and that will be buried and all but lost to many at the end of the age?

So Whats The Answer?

The answer is found in Psalm 138:2, “I will worship toward thy holy temple, and praise thy name for thy lovingkindness and for thy truth: for thou hast magnified thy word above all thy name (KJV).” But from Amos 8:11 we discover that “The days are coming,” declares the Sovereign Lord, “when I will send a famine through the land– not a famine of food or a thirst for water, but a famine of hearing the words of the Lord.” And in Isaiah 55:10-12 we are told that His word, once invested, will always bring a return. It is His most valued possession, He left it with us, and He expects us to invest it. (Matt 28:16-20)

But the last days will be a time of deception so great that most of those alive on earth will succumb to a system of lies that will literally turn black into white; darkness into light; and therefore life into death. The only reference point for truth will be His Word, and many of those with whom it has been entrusted will have rendered it so meaningless as to be buried.

Acting in the authority of the Lamb, but speaking the words of the Dragon, they’ll try to prevent their flocks from learning the Truth. The fact that those servants will have proven themselves to be imposters from the beginning is shown by their destiny; “outside in the darkness.” The one and only unforgivable sin after all, is unbelief.

So the talents represent His Word, the Gospel of our Salvation. Those who sow it liberally into the hearts of their listeners find it multiplies. Where there were five, ten now appear. Where there were two, now there are four. Those who simply study it find their understanding multiplies. Richer and deeper meanings appear from passages they thought were familiar. Over and over they discover that as their understanding grows their faith deepens.

Those who bury it and pay no attention find its value diminishes the longer they ignore it. Not only are their friends and neighbors deprived by their lack of communication, but they themselves lose insight and understanding. Finally even what little they had is taken from them.

And so the old principle “Use it or Lose it” comes into play, as it so often does. Remember the best way to learn something it to teach it, and by doing so we gain the lesson of the Parable of the Talents.