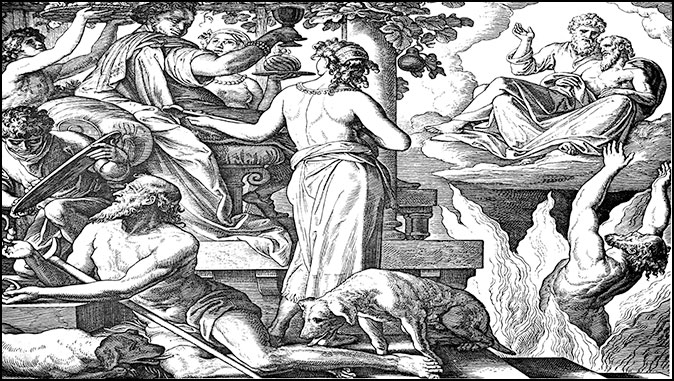 The Rich Man and Lazarus
A Bible Study by Jack Kelley

The story of the Rich Man and Lazarus is found only in the gospel according to Luke (16:19-31) and is the clearest picture anywhere in Scripture of the afterlife. As such it is essential reading for anyone attempting to counter the plethora of “life after death” accounts in Secular and New Age writings as well as the notion of reincarnation found in some cults and Eastern religions.

Actually the concept of life after death originates in Judaism. Job was the earliest to mention it (Job 19:25-27), but David, Isaiah, Daniel and others also wrote about the life that comes after death as a reward for righteousness. Daniel was the first to clarify that the unrighteous will also rise from the grave, and it’s from his explanation (Dan 12:2) that we’ve come to understand that everyone ever born lives forever. (Bodies are killed or wear out and expire but spirits, the repositories of life, are eternal.) An angel explained to Daniel that while all rise from the grave, for some the 2nd life brings everlasting reward and for others everlasting shame and contempt. And in Revelation 20 we’re told that for the unsaved, their return from the grave is for the purpose of judgment for their behavior while living. John wrote there about the 2nd death, actually a conscious state of eternal and solitary separation from God accompanied by never ending torment, as the outcome of this judgment. Christians think of this as “hell” but as we’ll learn from the Rich Man and Lazarus it’s really much worse.

Here’s a summary of the story. A rich man lived in the lap of luxury, while a beggar (Lazarus) languished outside his gate hoping for table scraps. In due time they both died. Angels carried Lazarus to “Abraham’s side (bosom)” a popular Jewish term in that day for the abode of the dead, also called Paradise. Jesus promised one of the men being crucified with Him that they would meet there before the end of the day. The Hebrew name for this place is Sheol, while the Greeks called it Hades from which the English word Hell is derived. The rich man also went there upon dying, but while Lazarus was being comforted, the rich man was in constant torment. Asking Abraham for relief, he was informed that while they were within sight and speaking distance of each other, they were actually in two different areas and there was no way to cross from one to the other. (Luke 16:19-26)

The rich man then asked Abraham to send Lazarus back to warn his brothers, still alive, to change their opinion about the need for a savior (Read Repent and be Saved) so as to avoid coming there, but Abraham refused, saying, “They have Moses and the Prophets (the Bible), let them listen to them.” “No”, said the rich man, “But if someone from the dead goes to them, they will repent.” Abraham responded, “If they will not listen to Moses and the Prophets, they will not be convinced even if someone rises from the dead.” (Luke 16:27-31)

And there’s the whole point of the story. Three points actually:

The only place to secure your eternal destiny is here on earth before you die. The rich man never asked for a 2nd chance for himself, only that his brothers be warned while they were still living so they could avoid sharing his fate. Having experienced the alternative, there’s no way he would have turned down an opportunity to join Abraham and Lazarus if one existed for him. Abraham made it clear that it was impossible to cross from either area to the other. The Bible contains all the facts you need to make an informed decision about eternity and is the Lord’s chosen method for bringing His children to Salvation.

Before the cross, those who had died in faith of a coming Savior as the Scriptures taught them went to a temporary place of comfort to rest until in the fullness of time their Redeemer’s shed blood finally erased the penalty for their sins. This is the place called Abraham’s bosom in the passage.

When Jesus came to Sheol after His death on the cross, he commended them for their faith (1 Peter 4:6) and took them to Heaven (Matt 27:52-53). His crucifixion had removed the final obstacle to their entry into God’s presence. All who have died in faith since the cross go straight into the Lord’s presence (2 Cor 5:7-8) where they await reunion with their resurrection bodies (1 Thes. 4:16). They are the only group of believers more anxious for the Rapture of the Church than we are (Romans 8:18-23).

The unsaved dead will continue to languish with the rich man until the end of the Millennium when they too are raised, judged, and then banished to a place of eternal torment, but this time in utter separation and darkness (Revelation 20:15).

Many in the liberal church, in cults, the New Age and in the Eastern religions speak of another chance to reconcile with God following physical death. Some even promote reincarnation into a series of lives through which people work their way toward perfection, eventually earning their place with God or even becoming a god. The Bible speaks of no such things, teaching instead that “man is destined to die once and after that to face judgment” (Hebr. 9:27). The Lord’s own words in the story of the Rich Man and Lazarus confirm this.

What a great trick of our enemy, persuading supposedly learned theologians to teach their biblically ignorant followers to ignore the clear admonitions of Scripture and seek an alternate way, only to discover after it’s too late that they were misled. For wide is the gate and broad is the road that leads to destruction and many enter through it. But small is the gate and narrow the road that leads to life and only a few find it. (Matt 7:13-14). In the context of these 2 verses all are seeking the path to salvation, but only a few find it. Most choose the complex over the simple, the wide over the small, the broad over the narrow.

Here’s the simple, small and narrow truth. God, Who created us, requires us to live by His law. Sin is the violation of God’s law and the penalty is death. Because you sin you can’t avoid the penalty, but because He loves you so much Jesus offered to die in your place. God agreed to this and has issued you a full pardon. You need only ask to be forgiven of all your sins, past present and future and receive your pardon. When you do your eternal destiny changes from torment to paradise, from separation to union, from death to life. Period. End of story.