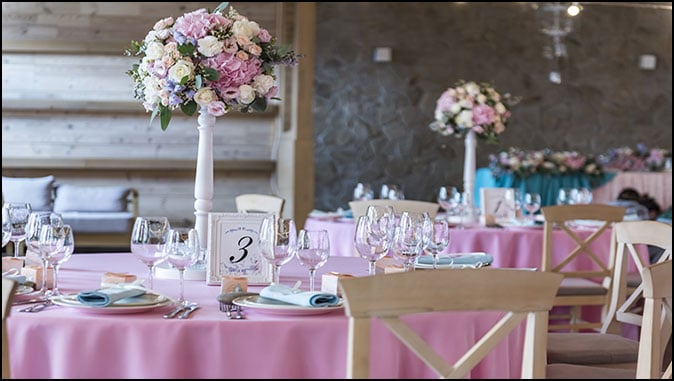 Jesus spoke to them again in parables, saying: “The kingdom of heaven is like a king who prepared a wedding banquet for his son. He sent his servants to those who had been invited to the banquet to tell them to come, but they refused to come.

“Then he sent some more servants and said, ‘Tell those who have been invited that I have prepared my dinner: My oxen and fattened cattle have been butchered, and everything is ready. Come to the wedding banquet.’ “But they paid no attention and went off–one to his field, another to his business. The rest seized his servants, mistreated them and killed them. The king was enraged. He sent his army and destroyed those murderers and burned their city.

“Then he said to his servants, ‘The wedding banquet is ready, but those I invited did not deserve to come. Go to the street corners and invite to the banquet anyone you find.’ So the servants went out into the streets and gathered all the people they could find, both good and bad, and the wedding hall was filled with guests.

“But when the king came in to see the guests, he noticed a man there who was not wearing wedding clothes. ‘Friend,’ he asked, ‘how did you get in here without wedding clothes?’ The man was speechless.

“Then the king told the attendants, ‘Tie him hand and foot, and throw him outside, into the darkness, where there will be weeping and gnashing of teeth.’

Why All The Parables?

When Jesus was asked why He spoke to the people in parables so often, He said in effect that there were two reasons: 1) to instruct His followers, and 2) to confuse everyone else. The parable of the wedding banquet is a good example. It’s either very instructive or very confusing depending on your knowledge and understanding of Jewish wedding customs during Biblical times.

Am I suggesting that ignorance of those customs disqualifies us as followers of Jesus? No, but I am convinced that acquiring a literal, historical grammatical understanding of Scripture will bring you closer to the Lord than almost anything else you can do.

Literal means we believe the bible is the inspired word of GOD to be taken at face value unless there is compelling reason to do otherwise (usually indicated in the context of the passage).

Historical means that each passage is put into its proper historical setting, and surrounded with the thoughts, attitudes and feelings prevalent at the time of writing.

Grammatical means that words are given meanings consistent with their common understanding in the original language at the time of writing.

First century Jewish wedding customs held that the father of the groom was in charge of the event and bore all the expense associated with the wedding and reception. In case of royalty or the very wealthy this often included providing a specially made garment to be worn over a guest’s regular clothing. This wedding garment was presented to the guest upon arrival and donned immediately. Wearing it wasn’t mandatory, but was considered a great insult to the Father of the groom if refused and could get a guest ejected from the festivities. In case of large gatherings it also served as identification to discourage uninvited guests from crashing the party.

The Parables of our Lord Jesus are earthly stories meant to explain heavenly truths. Each person or object is symbolic of someone or something else. Understanding the symbolism is crucial to discovering the lesson of the Parable. This is entirely consistent with literal, historical, grammatical interpretation since the passage is clearly described as a parable, and in fact gaining the theological impact of this parable requires such an understanding.

The King is God the Father, His Son our Lord Jesus. Invited guests represent Israel and the servants He sent are the prophets. The city He destroyed when His invited guests refused to attend and killed His servants is Jerusalem.

Do You Know The Bride?

Some say those He then sent His servants out to invite represent the Church, which does contain both good and bad, but the symbolism and timing are wrong. The Church is the Bride of Christ, not a group of last minute substitute guests. Since Israel had already refused their invitation, and the Church (being the bride) would not need an invitation, who could these guests be? They have to come from a time after the Bride is chosen and prepared, the wedding banquet ready and only the guests are lacking for the festivities to begin. Therefore, they have to be a group we call Tribulation Saints, those who come to faith after the Rapture of the Church in Revelation 4 but before the Wedding of the Lamb in Revelation 19. The servants He sends out to invite them are the 144,000 evangelists of Revelation 7 and the two witnesses of Revelation 11. They begin showing up in Heaven in Revelation 7 and more arrive in Revelation 15.

Here’s The Real Lesson Of The Parable

The wedding garment represents His righteousness. This is a concept explained on numerous occasions in both Old and New Testaments. Isaiah described our righteousness as filthy rags (Isa 64:6) and His as “garments of salvation” and “robes of righteousness” (Isa 61:10) where the acquisition of these qualities is likened to clothing given us at a wedding.

In Revelation 19 the church is seen prepared as a bride having been clothed in white linen, again representing righteousness. In both cases the righteousness symbolized by the clothing is given us, not purchased or earned.

The fact that one is thrown out for not wearing wedding clothes indicates these last minute guests have to be clothed in “garments of salvation” meaning they’re believers. And it’s important to note that the place into which he was thrown is the “outer darkness” the place of eternal separation from God, the final destination of unbelievers.

Many are invited, but few are chosen. He doesn’t desire that any should perish, but all would come to repentance (2 Peter 3:9). But whether it’s the Bride or the wedding guests, the only righteousness that gains us admission into the presence of God is that which is given us as a gift and accepted in faith (Rom 4:5). All of you who were baptized into Christ have clothed yourselves with Christ (Gal 3:27). For God made Him Who had no sin to become sin for us, that in Him we might become the righteousness of God (2 Cor 5:21). Selah.