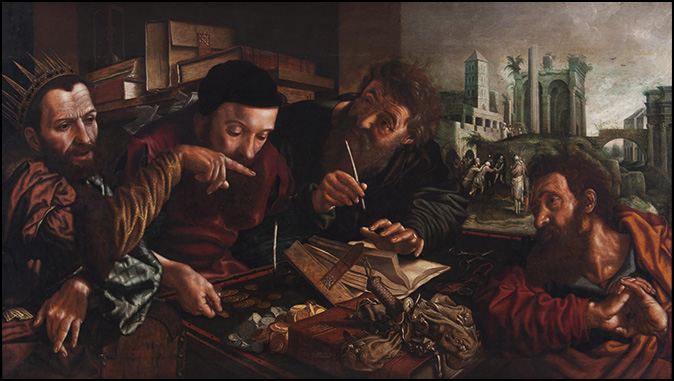 Then Peter came to Jesus and asked, “Lord, how many times shall I forgive my brother when he sins against me? Up to seven times?” Jesus answered, “I tell you, not seven times, but seventy-seven times. (Or seventy times seven)

“Therefore, the kingdom of heaven is like a king who wanted to settle accounts with his servants. As he began the settlement, a man who owed him ten thousand talents was brought to him. Since he was not able to pay, the master ordered that he and his wife and his children and all that he had be sold to repay the debt.

“The servant fell on his knees before him. ‘Be patient with me,’ he begged, ‘and I will pay back everything.’ The servant’s master took pity on him, canceled the debt and let him go.

“But when that servant went out, he found one of his fellow servants who owed him a hundred denarii. He grabbed him and began to choke him. ‘Pay back what you owe me!’ he demanded.

“His fellow servant fell to his knees and begged him, ‘Be patient with me, and I will pay you back.’

“But he refused. Instead, he went off and had the man thrown into prison until he could pay the debt. When the other servants saw what had happened, they were greatly distressed and went and told their master everything that had happened.

“Then the master called the servant in. ‘You wicked servant,’ he said, ‘I canceled all that debt of yours because you begged me to. Shouldn’t you have had mercy on your fellow servant just as I had on you?’ In anger his master turned him over to the jailers to be tortured, until he should pay back all he owed.

“This is how my heavenly Father will treat each of you unless you forgive your brother from your heart.” (Matt. 18:21-35)

Most people have read the first part of Matthew 18. It outlines a procedure for taking to task a believer who has sinned against you. Many an aggressive stance has been justified with this passage. But in my time as a pastor and counselor, I was surprised at how few of those applying the procedure had read the rest of the chapter. While chapter breaks are not inspired, and Peter’s question to the Lord about forgiveness (vs. 21) could have been asked at another time, it does appear next in sequence to the procedure for righting a wrong.

How many petty disputes could be dropped if put into the context of this parable? How would they rate in a comparison to what the Lord has forgiven in us? Do we, having been forgiven so much, refuse to forgive our brothers and sisters even a little? And if so, what are the real consequences?

The Rest Of The Story

We’ve often discussed the nature of parables; how they’re heavenly stories put into an earthly context and how the major characters always symbolize others. In the case of this parable the King is the Lord, you and I are His servants, the debts we owe represent our sins, and the jailer is Satan.

Identifying the King and his servants is easy. As to the debts owed, two denominations of money are mentioned, the 10,000 talents the servant owed the king and the 100 denarii the servant was owed by another. Let’s take the easy one first. Almost everyone agrees that a denarius was equivalent to one day’s wages. If 100 days equaled about 1/3 of a working year then repaying that size debt would require about 4 months of an average person’s income. That’s not an insignificant sum.

Since a talent was both a measure of weight (about 85 lbs. or 34 kg.) and a monetary coin, its value is much more difficult to define, but the most frequent description I found in my research is that it would have approximated 15 times an average person’s annual income. If so, then a debt of 10,000 talents would require 150,000 years of an average person’s income to re-pay, an impossibly large amount.

And that’s the first point. The King had forgiven a debt the servant couldn’t have repaid in a hundred lifetimes, and did so simply because he was asked to. The servant on the other hand demanded full and immediate payment from a friend for a much, much smaller sum. Now 4 months wages is a debt worthy of collection, and forgiving an amount that size would be a major sacrifice for most people. But the issue is not the legitimacy or even the size of the debt, it’s the comparative value. Shouldn’t being released from the burden of a debt so large he could never repay it have made the servant even a little more forgiving toward his brother? The servant’s demand for payment demonstrated his lack of gratitude for what the King had done for him, and that’s what aroused the King’s anger. Summoning the Jailer, the King ordered his servant punished until he repaid all he owed.

If The Shoe Fits…

Our debt of sin against the Lord is similarly impossible to repay, but in the Lord’s case He can’t simply overlook it. His requirement for justice demands the debt be paid in full. Knowing this, He sent His Son to pay it for us. This freed Him to completely and unconditionally forgive us just because we ask Him to. Don’t forget, from the Lord’s point of view we were all murderers, adulterers, blasphemers and thieves when He forgave us (Ephe 2:1-5). These are all crimes punishable by death. We’ve been forgiven so much, isn’t even a significant sacrifice justifiable under the circumstances? What offense would be too large to forgive in others when compared with what’s been forgiven in us?

Our unwillingness to forgive legitimate sins our friends commit against us demonstrates our ingratitude for what the Lord has done for us. It’s the result of the typical human double standard wherein we demand justice from others while expecting mercy for ourselves. This ingratitude is itself a sin and like all unconfessed sin leaves us open to attack by our enemy causing us great torment. See how the jailer represents Satan?

Like the servant and the King our relationship with the Lord consists of 2 components, union and fellowship. As the servant didn’t stop being a servant to the King just because of his bad behavior, neither do we ever stop being the children of our Lord. That’s union.

The servant could restore himself to the King’s good graces and stop the punishment by repaying the debt. We can restore ourselves to the Lord’s good graces and stop the torment by applying the payment already made on our behalf for all our sins. “If we confess our sins, he is faithful and just and will forgive us our sins and purify us from all unrighteousness.” (1 John 1:9) That’s fellowship.

Please note that John was writing to forgiven sinners, members of the church, advising us to confess and be forgiven even after we’ve been saved. We sin every day and His mercies are new every morning. God forgives us whenever we ask, every time we ask. (For me that’s been many more than seventy times seven.)

You Always Get What You Ask For

God’s Nature demands justice and fair play. Refusing to forgive when we’ve been forgiven causes a rift in our relationship with Him that only we can mend. Forgiving the friend who sinned against us and asking the Lord to forgive us restores us to fellowship with the Lord and allows Him to forget there ever was a problem. And often we’ll discover that the torment we endured while out of fellowship will actually contain the seeds of a blessing once we return. Isn’t that just like Him? Selah.