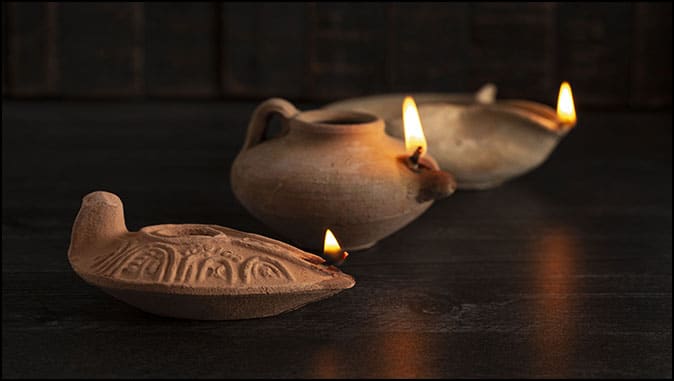 “At that time the kingdom of heaven will be like ten virgins who took their lamps and went out to meet the bridegroom. Five of them were foolish and five were wise. The foolish ones took their lamps but did not take any oil with them. The wise, however, took oil in jars along with their lamps. The bridegroom was a long time in coming, and they all became drowsy and fell asleep.

“At midnight the cry rang out: ‘Here’s the bridegroom! Come out to meet him!’

“Then all the virgins woke up and trimmed their lamps. The foolish ones said to the wise, ‘Give us some of your oil; our lamps are going out.’ ” ‘No,’ they replied, ‘there may not be enough for both us and you. Instead, go to those who sell oil and buy some for yourselves.’

“But while they were on their way to buy the oil, the bridegroom arrived. The virgins who were ready went in with him to the wedding banquet. And the door was shut.

What’s That All About?

This parable is often incorrectly described as having to do with the church, especially by those who cling to the post-tribulation rapture viewpoint. Let’s apply some standard rules of interpretation to see what it really means.

As for the timing of the event, there’s little debate since it’s clearly disclosed. The opening phrase “At that time” refers to several earlier references in the Olivet Discourse all pointing to Matthew 24:29 which says, “Immediately after the distress (tribulation) of those days…”

This verse of course refers to the Great Tribulation, a 3 1/2 year long sequence of judgments begun by the appearance of the “abomination that causes desolation, standing in the Holy Place,” commonly thought to be the anti-christ standing in the newly rebuilt Jewish Temple in Israel proclaiming himself to be god as prophesied by Paul in 2 Thes. 2:4.

So the timing of the parable is just after the end of the Great Tribulation, when what’s left of the world awaits the appearance of Messiah, the King. But notice, they’ve been waiting a long time, implying that the story actually began much earlier, and is now concluding.

The parable centers around 10 virgins, or bridesmaids depending on which translation you prefer, awaiting the appearance of a bridegroom. The Greek word is parthenos, which always describes someone who has never had sexual intercourse. The use of the word bridesmaid comes from an attempt by translators to adhere to the context of the story. But in any case, here’s where some knowledge of 1st century Jewish wedding traditions comes in handy.

Can I Marry Her?

In those days when a man took a fancy to a young woman, he approached her father to ask for her hand in marriage. A brief negotiation followed where the price he was required to pay as compensation for the family’s loss of their daughter was determined. It was called the bride price. If acceptable, and if the daughter agreed to become the man’s wife, they were officially betrothed and he went away to build a home for them next to his father’s house. This could take some time, and the couple rarely met again until the father of the groom pronounced the newly built home fit for habitation. Only then was the date set, and the man given permission by his father to go collect his bride for the wedding.

During this time the young woman was to watch and wait. She and her bridesmaids were to maintain a constant state of preparedness, since the wedding date would not be known to her until the bridegroom actually appeared. For his part, the groom would usually try to show up unexpectedly to surprise her, carrying her off suddenly “like a thief in the night” when no one would see them. When the bridesmaids discovered the bride had been “snatched away” there would be a great torch-lit procession, announcing to the whole town that the wedding banquet was about to begin. This was typically a seven day celebration during which the bride and groom were hidden away in their private rooms while the whole town made merry. The father of the groom picked up the tab for the festivities.

I Can See Clearly Now

Against the backdrop of this tradition, the meaning becomes clear when we insert the actual characters that those in the parable represent. To do this, we’ll rely on the principle of expositional constancy, from which we learn that symbolism in scripture tends to be consistent. For example, whenever yeast is used symbolically it always refers to sin, while symbolic use of the word rock always refers to the Lord, etc. All through the scriptures, whenever the term bridegroom is used symbolically, it always refers to the Lord. And no one argues that the Bride of Christ is uniquely descriptive of the church. Obviously, the bridesmaids are not the Bride so they can’t represent the church. In fact, the Bride is never mentioned anywhere in the parable. She was obviously spirited away earlier while the bridesmaids slept. The bridesmaids represent people on Earth during the Great Tribulation after the church has gone.

Now it’s time for the wedding banquet but some bridesmaids lack sufficient oil to light the way. Asking to borrow some from their friends they’re refused, since there might not be enough to go around, and sent off to buy some for themselves. By the time they return, the banquet has already begun, the door is closed and they’re refused admission, the bridegroom claiming that he doesn’t even know them.

Checking on the symbolic use of oil, we find it refers to the Holy Spirit. The Holy Spirit is a gift uniquely given to believers at the moment of salvation (Ephe. 1:13). You can’t get it for others nor can they give any of theirs to you. Each of us has to receive it by ourselves and for ourselves.

The bridesmaids with oil represent those who will have given their hearts to the Lord during the tribulation period after the Church has gone, while those without it symbolize others who haven’t, and only those who have will be invited in.

What’s That Supposed To Mean?

So what does the parable mean? First of all, I’m convinced it’s not trying to hint at the timing of the Rapture. I believe it’s sole purpose is to serve as one of the clearest warnings the Lord ever gave to those He would find still on Earth when He returns, and that’s to make sure they’re ready to receive Him while there’s time.

When the Lord comes back at the End of the Age, He’ll find both believers and unbelievers present on Earth. Having previously spirited His bride (the church) away, He’ll now decide who should be allowed to participate in the blessings of His Kingdom using the presence of the Holy Spirit in each one’s life as the determining factor. Those in whom the Spirit resides when He returns are invited in but those without it will be excluded.

Because just as importantly, the parable teaches that His return signals the deadline after which even the request to be saved and receive the Holy Spirit will be denied. (The foolish virgins, as the story calls them, were on their way to get oil when the bridegroom arrived.) The door will be closed, and the Lord will deny ever knowing those who’ve asked too late.

By not deciding for Him, they will have decided against Him and once His return proves them wrong, there’ll be no opportunity to change their minds. For it is by grace that you have been saved, through faith (Ephe 2:8) and faith is being sure of what we hope for, and certain of what we do not see (Hebr. 11:1). Selah.