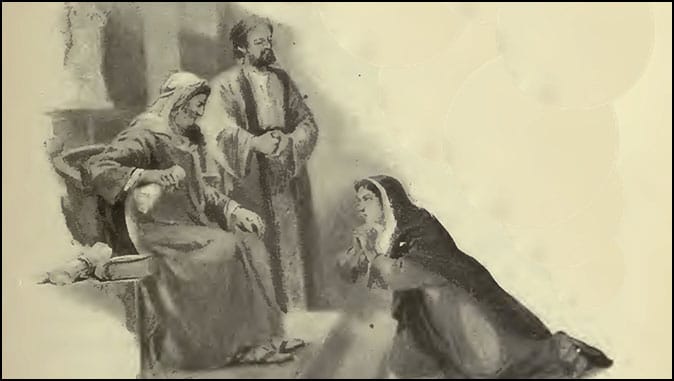 Then Jesus told his disciples a parable to show them that they should always pray and not give up. He said: “In a certain town there was a judge who neither feared God nor cared about men. And there was a widow in that town who kept coming to him with the plea, ‘Grant me justice against my adversary.’

“For some time he refused. But finally he said to himself, ‘Even though I don’t fear God or care about men, yet because this widow keeps bothering me, I will see that she gets justice, so that she won’t eventually wear me out with her coming!’ ” And the Lord said, “Listen to what the unjust judge says. And will not God bring about justice for his chosen ones, who cry out to him day and night? Will he keep putting them off? I tell you, he will see that they get justice, and quickly. However, when the Son of Man comes, will he find faith on the earth?” – (Luke 18:1-8)

Let’s Put This In Context

The background for this parable is found in chapter 17. “When will the Kingdom come?” some had asked. In response the Lord told them that one day soon they would long to see one of His days (days like this one when He was with them) but would not see it. First He had to suffer and die. Then there would be a succession of false Messiahs and still it wouldn’t be time. But when He finally did come it would be suddenly and it would catch many people off guard. They would have given up and stopped praying.

Then He told His disciples the story of the persistent widow. His point was that if even a corrupt judge could eventually be persuaded by the persistence of a widow, someone without standing or influence in their day, how much more likely would the Lord be to respond to the persistent prayers of His followers?

It Wasn’t the First Time

“Pray without ceasing,” Paul wrote in 1 Thes. 5:17. Good advice. Earlier the Lord had given us similar instruction.

“Ask and it will be given to you;” He said, “Seek and you will find; knock and the door will be opened to you. For everyone who asks receives; he who seeks finds; and to him who knocks, the door will be opened. “Which of you, if his son asks for bread, will give him a stone? Or if he asks for a fish, will give him a snake? If you, then, though you are evil, know how to give good gifts to your children, how much more will your Father in heaven give good gifts to those who ask him! – (Matt; 7:7-11)

In both cases the lesson is the same. If even those who are evil can be moved by persistence, how much more so the Lord? It’s funny in a way, how the Lord longs for our participation in His plan. His return is a foregone conclusion, the decision made before the foundations of the world were laid. Yet He encourages us to keep praying for it, and to never give up till the day it happens. It’s almost as if He’s saying our prayers could influence the timing.

It wouldn’t be the only time. Through His disciples He told the Jews in Jerusalem that as the time for the Great Tribulation draws near, to pray that it not begin on a Sabbath or in the winter (Matt. 24:20). What’s that all about? Would He alter the start date of the worst period of judgment ever to befall humanity to accommodate the needs of what will surely be a religious minority? Does prayer really have that kind of power?

To drive home the point He began in the widow’s story, the Lord closed with a question. “However, when the Son of Man comes, will he find faith on the earth?” Though His return is certain, will there be anyone left with the persistence to still be praying for it when He comes?

The prayers of righteous people are powerful and effective, the Bible tells us (James 5:16), sufficient to save the soul, heal the sick, raise the dead. And, if the above examples are any indication, influence the timing of God’s Plan. If so, why don’t we see more evidence of the miraculous today? If the Age of Miracles really is over, as some would have us believe, is it just because we’ve stopped praying for them?

The widow hounded the judge to a point where he thought her obnoxious, and he answered her request just to get her off his back. In another case, the Lord told of a man who had unexpected guests arrive late at night, and him with no food in the pantry. Hurrying to his neighbor’s house, he pounded on the door asking for three loaves of bread. The neighbor was already in bed. The Lord explained that it wasn’t the neighbor’s friendship that got him out of bed to give the man what he needed, but his boldness in asking (Luke 11:5-8). (The word translated boldness also implies persistence.)

Ask and it will be given to you. Pray without ceasing. Be bold and persistent, especially when praying for His return. Let the Lord know that at least in your heart, there’s still faith on Earth. Maybe if enough of us persist in this, we can hasten the day of His coming. Selah.