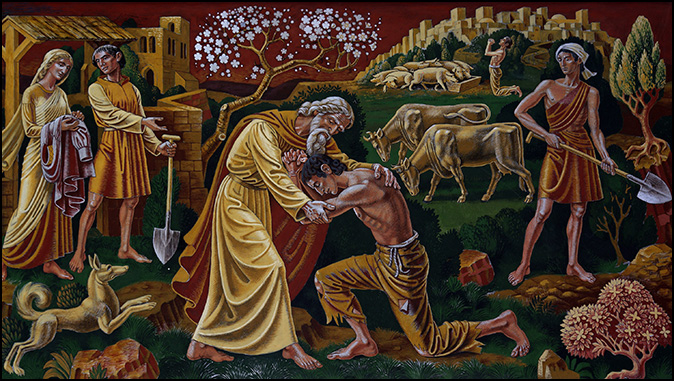 Jesus continued: “There was a man who had two sons. The younger one said to his father, ‘Father, give me my share of the estate.’ So he divided his property between them.

“Not long after that, the younger son got together all he had, set off for a distant country and there squandered his wealth in wild living. After he had spent everything, there was a severe famine in that whole country, and he began to be in need. So he went and hired himself out to a citizen of that country, who sent him to his fields to feed pigs. He longed to fill his stomach with the pods that the pigs were eating, but no one gave him anything.

“When he came to his senses, he said, ‘How many of my father’s hired men have food to spare, and here I am starving to death! I will set out and go back to my father and say to him: Father, I have sinned against heaven and against you. I am no longer worthy to be called your son; make me like one of your hired men.’ So he got up and went to his father.

“But while he was still a long way off, his father saw him and was filled with compassion for him; he ran to his son, threw his arms around him and kissed him.

“The son said to him, ‘Father, I have sinned against heaven and against you. I am no longer worthy to be called your son.’

“But the father said to his servants, ‘Quick! Bring the best robe and put it on him. Put a ring on his finger and sandals on his feet. Bring the fattened calf and kill it. Let’s have a feast and celebrate. For this son of mine was dead and is alive again; he was lost and is found.’ So they began to celebrate.

“Meanwhile, the older son was in the field. When he came near the house, he heard music and dancing. So he called one of the servants and asked him what was going on. ‘Your brother has come,’ he replied, ‘and your father has killed the fattened calf because he has him back safe and sound.’

“The older brother became angry and refused to go in. So his father went out and pleaded with him. But he answered his father, ‘Look! All these years I’ve been slaving for you and never disobeyed your orders. Yet you never gave me even a young goat so I could celebrate with my friends. But when this son of yours who has squandered your property with prostitutes comes home, you kill the fattened calf for him!’

“‘My son,’ the father said, ‘you are always with me, and everything I have is yours. But we had to celebrate and be glad, because this brother of yours was dead and is alive again; he was lost and is found.'” – (Luke 15:3-32)

Last time we looked at this parable from a personal point of view, but there’s also a prophetic angle, wherein the father represents God, the older son Gentile Christianity and the younger son the Jews. (Remember, if Abraham is the father of the Jews then technically everyone was a gentile before him, making the gentiles older than the Jews.)

A quick read of Israel’s history shows how the life of the nation parallels that of the younger son. Having been given a rich and generous inheritance, Israel abandoned the Lord and squandered it on false gods to a point where the nation nearly ceased to exist, and in fact as far as the rest of the world was concerned was no more.

Meanwhile just like the older son, the Gentile Church stayed “close to home” and while working for God appropriated Israel’s blessing and inheritance and assumed the role of God’s heir on earth, calling itself “spiritual Israel.” It’s known as Replacement Theology.

When the advent of Zionism in the later part of the 19th century resulted in the Balfour Declaration after WW 1 and the reappearance of Israel in 1948, no one seemed less thrilled than the World Council of Churches, an international alliance of Protestant denominations that to this day is decidedly pro-Arab in its political outlook, and sees no need for the existence of Israel in the End Times. This attitude will become more pronounced as the end of the age draws nearer.

Can’t you just hear mainline Protestantism in the voice of the older son? “Look! All these years I’ve been slaving for you and never disobeyed your orders. Yet you never gave me even a young goat so I could celebrate with my friends. But when this son of yours who has squandered your property with prostitutes comes home, you kill the fattened calf for him!”

The church has fielded missionaries, founded schools, formed congregations without number, with buildings and programs to meet every need, and in many other ways worked long and hard for the Lord, without ever receiving any of its promised reward. During this time Israel consorted with pagan gods including that one most blasphemous, secular humanism. Now after a nearly 2000 year absence, dragging the Lord’s name through the mud all the way, is Israel now coming back to reclaim their position in God’s family? Is the Lord going to allow this? It isn’t fair!

“‘My son,’ the father said, ‘you are always with me, and everything I have is yours. But we had to celebrate and be glad, because this brother of yours was dead and is alive again; he was lost and is found.’ ” Though the brother had called him “your son” the father called him “your brother.” The church will receive all its promised reward, but God’s promises to Israel never expired and weren’t conditioned on past behavior. In addition, as the End draws near, “They will look upon Me Whom they have pierced” (Zech 12:10) speaking of Israel’s acceptance of the Messiah.

The Promise To Israel

This is what the Sovereign LORD says: “It is not for your sake, O house of Israel, that I am going to do these things, but for the sake of my holy name, which you have profaned among the nations where you have gone. I will show the holiness of my great name, which has been profaned among the nations, the name you have profaned among them. Then the nations will know that I am the LORD, declares the Sovereign LORD, when I show myself holy through you before their eyes. For I will take you out of the nations; I will gather you from all the countries and bring you back into your own land. I will sprinkle clean water on you, and you will be clean; I will cleanse you from all your impurities and from all your idols. I will give you a new heart and put a new spirit in you; I will remove from you your heart of stone and give you a heart of flesh. And I will put my Spirit in you and move you to follow my decrees and be careful to keep my laws. You will live in the land I gave your forefathers; you will be my people, and I will be your God.” – (Ezek 36:22-28)

Now lest you fall for the interpretation given by some in the church that this passage was fulfilled in the return after the Babylonian captivity, look at the phrases “I will sprinkle clean water on you, and you will be clean,” and “I will give you a new heart and put a new spirit in you.” These phrases describe the effect of being born again, and in the context of the passage take place after the re-gathering of Israel in the late 1940s. So while this is ultimately still in the future for us, its fulfillment has begun and continues as you read this.

The Problem With People

To the people of the world, Israel was dead and gone. No nation so defeated and dispersed has ever come back to life again. No language once discarded has ever come back into common use. No land once appropriated has ever been returned. For us in the USA it would be like the American Indians reclaiming their lands, restoring their languages and cultures and becoming a group of independent nations with a voice in world affairs. It’s hard to imagine.

But for God it’s simply keeping a promise. And though the nations conspire against Him in their attempt to bring to naught that which He has ordained, Israel has returned to the land God gave to Abraham, speaks the language Abraham spoke, and is an independent nation again. And no one, not even the Gentile Church can dispute that. And what’s more, they’re here to stay. (Amos 9:14-15)

We in the church who are the true believers look at our leaders and shake our heads in wonder at their resistance to such an obvious fulfillment of God’s promise. If they don’t believe He should fulfill His promises to Israel how can they trust Him to do so for them? Do they believe that the Church has been any more faithful to Him than Israel? More deserving? It’s so human; demanding others be brought to justice, while expecting mercy for themselves.

Sadly, many in the church today share the attitude of their leaders. If you’re one of them remember another promise God made to Abraham. “I will bless those who bless you, and curse those who curse you.” (Gen. 12:3) And what about the one Jesus made to us? “Whatever you did not do for one of the least of these brothers of mine, you did not do for me.” – (Matt. 25:45)