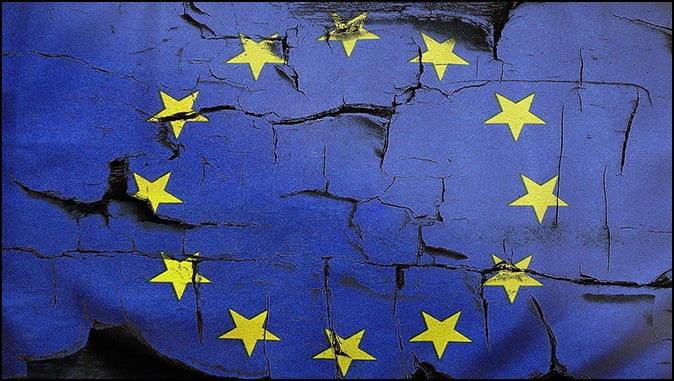 The new coronavirus appears to be tearing apart the fragile framework of the European Union.

“Europe” said the former Commission chief and a EU godfather, Jacques Delors, “is in “mortal danger”.

If citizens feel themselves abandoned at the heart of the pandemic, said Former French Prime Minister Manuel Valls, the EU could “collapse”.

The EU objective was evidently supposed to be an “ever closer union”. But now, if the EU does not show solidarity and strength at a time of global crisis, what is the EU’s purpose? Its ideological supporters have a mantra: each new problem must be solved by more Europe. “Europe is our future, we have no other”, Germany’s former Foreign Minister Hans-Dietrich Genscher once said.

Sadly, these high-flown phrases seem to shrivel into empty slogans.

The truth is that there is no “Union”. There is a conglomerate of European states trying to take advantage of some rules called “the union”. In times of crisis, old European divisions always seem to reopen — and crises are part of the old continent, possibly its epitaph.

The coronavirus now has put the European Union and its comfort zone face-to-face with all its weaknesses, decadence and cowardice.

In the face of Italy’s pandemic catastrophe, the European Union showed only impotence and indifference. European Commission President Ursula von der Leyen even “apologized” to Italy and acknowledged that the EU had failed to respond well to the Covid-19 pandemic.

When Italy called for solidarity from its European neighbors, they declined. Even the former President of the European Parliament, Antonio Tajani, spoke of a “cowardly Europe”. The pro-EU Italian newspaper, La Repubblica, called it bluntly, “Ugly Europe”. It seems that 70% of Italians believe Germany is trying to “strangle” them.

Because of the coronavirus, Europe’s Schengen Area of passport-free travel inside the EU — one of the two pillars of EU dogma (the other being the euro) — was suspended in a hurry and internal borders closed without coordinated action. During the the first two weeks of March, nine countries closed their borders; followed by the partial closure of Germany’s borders. The EU then announced the closure of its external borders for 30 days.

“Do you not understand the emergency we are going through?”, Spain’s prime minister, Pedro Sánchez, asked German Chancellor Angela Merkel during one of the EU’s latest summits.

What the Germans appeared to want was the advantages of an expanded euro market without its disadvantages, such as “solidarity” in the instance of migrants or coronavirus. Germany has always dominated Europe via the EU, which was created after the Second World War to prevent Germany from rearing its head again.

A report by the Bertelsmann Foundation found that Germany, which accounts for more than a quarter of the eurozone’s economic output, benefited most from the EU’s single market, earning an extra 86 billion euros a year because of it. It is likely this financial bonus that now helps Germany in contending with the epidemic. Germany had 25,000 ventilators; France had only 5,000, and Italy was forced by a lack of ventilators to make agonizing decisions about whom to treat. “Wouldn’t European solidarity mean Germany deliver [sic] at least some of the new ventilators to countries that currently need them most?”, asked Die Zeit’s journalist Jochen Bittner.

Among the European states, however, even faster than empathy and solidarity, spread bitterness and resentment.

In 2017, Jeroen Dijsselbloem, then the Dutch Minister of Finance and head of the “Eurogroup” (the EU’s grouping of finance ministers), said that southern European countries such as Italy wasted their money on “drinks and women”. This month, one of Germany’s leading newspapers, Die Welt, wrote that the Italian mafia was waiting for Brussels’ coronavirus money.

Berlin was not moved, even by the pictures of the Italian army transporting dozens of coffins out of a city because the local crematorium was overwhelmed by the deaths. Dozens of coffins awaiting burial were lined up in churches.

“It pains me to say it, but the countries who are dragging their feet, such as Holland, Germany and Sweden, have not yet experienced shortages of coffins”, Italy’s former prime minister Enrico Letta commented. The Germans and the Dutch never found retirement home residents “dead and abandoned,” as happened in Spain. “European capitals watched as Italy took steps that seemed extreme at the time in an ultimately futile bid to hold back infections from the rest of the Continent”, wrote Politico.

Another merciless battle Italy fought with the EU was for protective face-masks. France adopted a policy of requisitioning them; Germany banned their export. Those unilateral decisions undermined a much-touted EU principle: the free movement of goods in the single market. As L’Express exposed, France seized four million masks belonging to a Swedish company and that had been intended, in part, for Italy and Spain.

A German writer, Hans-Magnus Enzensberger, calling the European Union “the gentle monster”, predicted its demise: “All the empires of history flourished for no more than a limited half-life, before they foundered on over-expansion and internal contradictions”.

To revive their economies, the countries most affected, such as Italy and Spain, claimed that they could be financed by a common EU debt to be raised through “coronabonds”. Spain, France, Greece, Malta and Ireland all supportd this solution, as did the German philosopher Jürgen Habermas, who asked the EU to give “mutual aid”.

Germany and the Netherlands, however, killed the proposal.

The Netherlands was demanding that the loans be accompanied by “long-term conditions”, such as reducing the size of welfare states.

The same lack of interest was exhibited by the European Stability Mechanism (ESM), funded by EU member states, a process to lend money to a state in difficulty, up to 2% of its GDP.

“North Europe is abandoning south Europe!” said the former leader of the German Social Democrats, Sigmar Gabriel . “Better to have Eurobonds and coronabonds than a destroyed EU”.

The conditions demanded, however, would be unacceptable for Italy: the countries hit the worst by Covid-19 — Italy, Spain and France — are the ones that have the least amount of fiscal breathing space. “Europe never met when we needed it” French economist Jean-Paul Fitussi reflected. “And therefore, it was foreseeable that the northern countries would say no to the mutualisation of debt. But without mutualising debt, today’s crisis is not resolved. And not doing it is collective suicide”.

The UK, after Brexit, is out the door; eastern Europe has clashed with Brussels for years and now comes the isolation of southern Europe.

While Italy was struggling to slow and contain the deadly contagion, the president of the European Central Bank, Christine Lagarde, announced that the central bank was “not here to close spreads” between Italian and German bonds, a measure of the risk differential between the two sovereign debts. Lagarde’s comments, untarnished by “solidarity”, sent Italy’s bond yields sharply higher.

Earlier, when Italy and Greece were overwhelmed by migrants from the Middle East and Africa, the EU countries refused to take their “share” of migrants. Lacking a policy to stop the flow of mass immigration, Europe decided to leave the southern countries to their fate. Italy’s foreign minister at the time, Angelino Alfano, declared that Europe had “abandoned” Italy. “The EU Is Abandoning Italy in Its Hour of Need,” declared Elisabeth Braw in Foreign Policy.

The truth is that the EU is simply showing how weak it really is. As Éric Zemmour observed:

“… our borderless ideology has prohibited us from closing borders… As for our European sovereignty, it turns out to be vanishing. When the tragedy knocks on our doors, our conception of the world brings us to our knees…”

In times of crisis, the technocrats in Brussels look robotic and apathetic, while national states become essential to contain illegal immigration or a pandemic. The European Union is dead, it just does not yet know it.