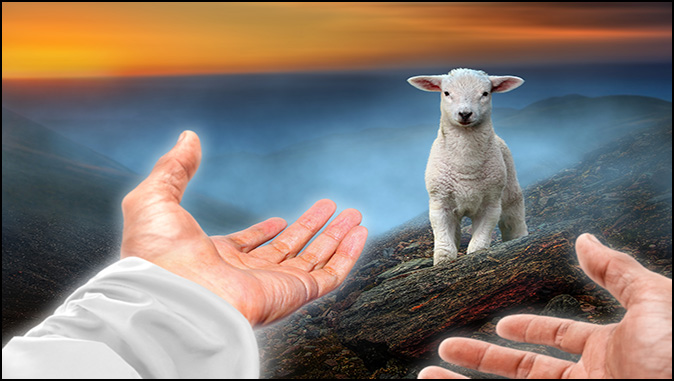 Some interpret this passage to mean the Father gave us to the Son as a gift. People who say this are usually trying to support the idea that it is God who chooses which of us will be saved and then He gives those He’s chosen to His Son. But is that really what Jesus was saying? Let’s find out.

The Shepherd And The Sheep

If John 6:37-40 was the only passage on this subject in the Bible we might be tempted to agree. But when we apply the Biblically popular model of the shepherd and the sheep to John 6:37-40 a different conclusion emerges.

By saying “all those the Father gives me” I believe Jesus was hinting at this model. To find out if that’s the case let’s see if the Bible tells us that it’s the Father who really owns us.

We know all the little children belong to Him, but there comes a time in everyone’s life when we pass into the hands of the enemy. It happens when we become accountable for our sins (Romans 7:9). After that we have to become a child of God again or we’ll automatically spend the balance of our life in the camp of the evil one.

This was made clear in the Garden, just after mankind’s first sin. Speaking to the serpent, God said, “I will put enmity between you and the woman (Eve), between your offspring (seed) and hers” (Genesis 3:15). This prophecy will ultimately be fulfilled in the battle at the end of the age between “someone” the anti-Christ (seed of the serpent) and Jesus the Christ (seed of the woman).

But in the mean time, all who don’t become children of God automatically become children of the devil. Jesus revealed this in the Parable of the Wheat and the Tares (Matt. 13:24-30). In His explanation of this parable (Matt. 13:37-43) Jesus identified the field as the world and said there are two kinds of seed in the field. There’s the good seed, which represents the sons of the Kingdom and the bad seed, which represents the sons of the evil one. He didn’t mention a third kind of seed. Everyone is either a child of the kingdom or a child of the evil one.

John 1:12-13 explains that we became children of the kingdom by believing that Jesus died for our sins and rose again, and 2 Cor. 1:21-22 adds that when that happened, God set his mark of ownership on us and put His Spirit in our heart as a deposit guaranteeing what is to come, which is eternal life with Him. From then on it is He who makes us stand firm in Christ.

In a recent study on this topic I demonstrated how the Bible makes it clear that we have to choose to allow this to happen so I won’t go into more detail about that part of it here. My point is simply to show that because we believe Jesus died for us, we now belong to God.

Now we’ll go back to John 6:37-40 and continue with the shepherd/sheep model. In many cases the owner of the flock did not tend the flock but gave them into the hands of a shepherd who became responsible for their well being. In some cases this shepherd was a hired hand, but in other cases the owner’s son was tasked to care for the sheep. But in either case the owner gave the sheep to the shepherd who then assumed responsibility for them. That’s what Jesus was referring to in John 6:37 when He said, “All those the Father gives me will come to me, and whoever comes to me I will never drive away.”

So you can see, we’re not a gift that the Father gave to the Son. We’re someone God has taken ownership of and then entrusted to the care of His Son. And to make sure we understand this, Paul said the day will come when Jesus will hand the entire kingdom back to His Father (1 Cor. 15:24).

In John 6:38 Jesus went further in explaining this. He said, “For I have come down from heaven not to do my will but to do the will of him who sent me.” This was always God’s plan for us. He sent His Son to pay the price so He could purchase us. Then He gave His Son the responsibility of keeping us. John 6:39 says,

“And this is the will of him who sent me, that I shall lose none of all those he has given me, but raise them up at the last day.”

The Father purchased us and marked us as His own so no one else could make a claim of ownership. The Holy Spirit is the deposit that guaranteed this. Then he gave us into the care of His Son saying, “Don’t lose any of them.” Father, Son, and Holy Spirit are all involved in our salvation.

“For my Father’s will is that everyone who looks to the Son and believes in him shall have eternal life, and I will raise them up at the last day” (John 6:40).

This is a beautiful summary statement of God’s will where humanity is concerned. Everyone who sees what Jesus has done and believes He did it for them will have eternal life (not just those God has chosen).  Now obviously no one alive today actually witnessed the crucifixion, but the phrase translated “looks to the Son” can mean to mentally view, to see with the mind’s eye, to perceive what Jesus did for us. This is what Paul called living by faith not by sight in 2 Cor. 5:7.

And when Jesus criticized Thomas for refusing to believe until he saw and felt the nail marks in His wrists and the wound in His side, He said, “Because you have seen me you have believed. Blessed are those who have not seen and yet have believed” (John 20:29). He was referring to the millions who would “see” by faith instead of having the need to see and feel in the physical sense.

In Biblical times when a shepherd had to come to town for something, he would bring the sheep under His care to the common pen at the edge of town. A man who was there to watch the pen opened the gate and the sheep went in among all the others. Soon it was impossible to tell whose sheep were whose. But when the shepherd returned all he had to do was call them. His own sheep, and only his, would come to him. Sheep learn to recognize their shepherd’s voice.

Jesus was building on this fact in John 10:2-5 when He said,

“The one who enters by the gate is the shepherd of the sheep. The gatekeeper opens the gate for him, and the sheep listen to his voice. He calls his own sheep by name and leads them out. When he has brought out all his own, he goes on ahead of them, and his sheep follow him because they know his voice. But they will never follow a stranger; in fact they will run away from him because they do not recognize a stranger’s voice.”

There are two very comforting models in these verses. The first is the rapture of the Church. We are the sheep of the Lord’s flock. Currently we’re in a common pen with sheep who are not of His flock, and the Lord has left us here for a time. To the casual observer there is no identifiable difference between us and the others.

The second is a model of our security in Him. Sheep will only follow their own shepherd because they know his voice. They can never be lured away by a stranger because they do not recognize a stranger’s vioce. In the same way, we follow the Lord because we know His Gospel, we can never by lured away by someone preaching a different Gospel and in fact will run away from it because we don’t recognize a different Gospel.

So we’re owned by the Father, purchased with the blood of the Son, guaranteed with the seal of the Holy Spirit. The Father has entrusted us to the care of the Son who has promised not to drive us away or lose us. This has all happened because we believe Jesus died to pay the penalty for our sins and rose again. Because of our belief we now have eternal life and will not be condemned; we have crossed over from death to life (John 5:24). It’s what the Bible says.

The Book Of Life

OSAS And The Church In Sardis (Rev. 3:1-6) By Jack Kelley I keep getting questions…

Falling Away? A Study of Hebrews 6

Falling Away? A Study of Hebrews 6 By Jack Kelley It is impossible for those…

Eternal Security By Dr. Arnold Frutchenbaum This shall be the first of a series on…