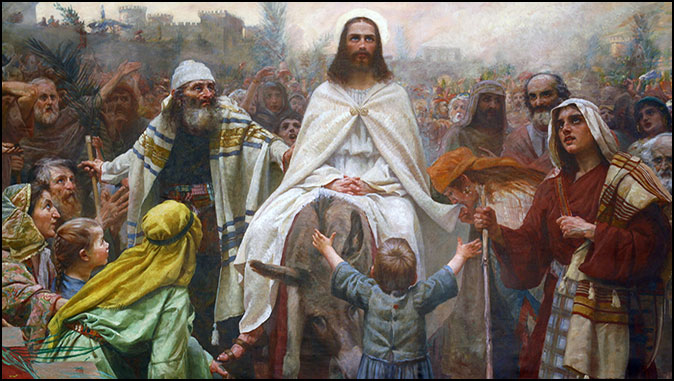 On the next day, the great multitude who had come to the feast [Passover], when they heard that Jesus was coming to Jerusalem, took the branches of the palm trees, and went out to meet Him, and began to cry out, “Hosanna! Blessed is He who comes in the name of Yahweh, even the King of Israel.” – John 12:12-13

Whenever seasoned Christians hear the phrase, “The Triumphal Entry,” their minds always go to the day described in the passage above — the day Jesus entered the city of Jerusalem at the beginning of the last week of His life.

And what a triumphal entry it was! He had just raised his friend, Lazarus, from the dead after he had been in the tomb for four days. He had performed this miracle in the village of Bethany, which was a suburb of Jerusalem. The news of the miracle had spread throughout Jerusalem like wildfire. Thus, when the rumor spread that Jesus was about to enter Jerusalem, tens of thousands gathered in the Kidron Valley to welcome Him to the city.

The scene was majestic as Jesus approached the city riding on a donkey. The frenzied people paved His path with their garments and with palm branches. And they shouted “Hosanna to the Son of David!” — meaning, “Save us, Messiah!”

The religious leaders of the nation (the Pharisees) were outraged over the adulation being given to Jesus. They demanded that He rebuke the people for praising Him as their Messiah. But Jesus refused to do so. He told the Pharisees that if the people became silent, “the stones will cry out” (Luke 19:39-40). The Pharisees also became upset over the fact that even small children and babes were praising Jesus (Matthew 21:15- 16). When they protested, Jesus quoted Psalm 8:2 to them — a verse that prophesied that praise for the Messiah would come “from the mouths of infants and nursing babes.”

But as triumphal as that entry was, it was nothing compared to the Lord’s first one on the night when He was born in Bethlehem. It was one of history’s greatest miracles for it was the moment when God became flesh, fulfilling Isaiah’s prophecy that one day God would take on human form and become “Emmanuel,” meaning “God with us” (Isaiah 7:14). The birth also fulfilled the prophecy made by Micah 700 years earlier that the Messiah would be born in Bethlehem (Micah 5:2).

What a spectacular event this first triumphal entry must have been! Unlike the Jerusalem entry, which was hailed by thousands of human beings, the Lord’s entry into the world at Bethlehem was proclaimed by an angel who appeared in the heavens at night and gloriously announced the birth of Jesus (Luke 2:8-12). He proclaimed the baby to be the “Savior who is Christ [Messiah] the Lord!” (Luke 2:11).

That angel was then joined by a heavenly host of angels who began praising God the Father (Luke 2:14): “Glory to God in the highest, and on earth peace among men with whom He is pleased.”

The scene must have been bathed in brilliant light because the Shekinah Glory of God the Father shone all around the angels as they praised the Messiah’s birth (Luke 2:9). The Bethlehem shepherds to whom the heavenly host appeared must have been stupefied. But when they gathered their wits, they hurried into the village of Bethlehem and found the baby in an animal pen, sleeping in a feeding trough, just as the initial angel had said would be the case (Luke 2:12).

The Scriptures prophesy that Jesus has two future triumphal entries that He is yet to fulfill. The first is the Rapture of the Church that is described in detail in 1 Thessalonians 4:13-18. There are no prophecies that must be fulfilled before the Rapture occurs. It could happen at any moment.

When it does, Jesus will appear in the heavens in glory and majesty, and all true believers in Him will be taken up to meet Him in the sky — both the living and the dead. All will be instantly glorified, being given immortal bodies. They will then return with Him to Heaven.

This entry will be triumphal only for those who have put their faith in Jesus as their Lord and Savior. Others will be left behind to face the savagery of the Antichrist during the seven years of the Tribulation.

Jesus’ final triumphal entry will be His Second Coming to the earth at the end of the Tribulation when he returns to establish His Millennial Kingdom. He will reign from Jerusalem for a thousand years, bringing peace, righteousness and justice to this sin-sick world.

He will be accompanied by millions of glorified saints and angels who will be singing His praises (Revelation 19:14, Zechariah 14:14, Jude 14 and Colossians 3:4). He will speak a supernatural command, and all the forces of the Antichrist will be instantly killed (Zechariah 14:12). The Jewish remnant that will still be alive will accept Him as Messiah, proclaiming, “Blessed is He who comes in the name of Yahweh” (Zechariah 12:10 and Matthew 23:39).

Jesus will then ride down into the Kidron Valley and up to the Eastern Gate that leads into the Temple Mount. It is the gate that Ezekiel prophesied would one day be shut (which it was in 1541) and would remain closed until the Messiah comes to establish His worldwide reign (Ezekiel 44:1-3).

As Jesus approaches the gate, it will blow open and welcome Him as the King of kings. This amazing imagery is presented in Psalm 24:7 and 10:

Jesus will then be coronated the King of kings and Lord of lords. Many peoples will say, “Come, let us go up to the mountain of the LORD, to the house of the God of Jacob” as He begins His glorious reign as described in Isaiah 2:3-4:

…the law will go forth from Zion,
And the word of Yahweh from Jerusalem.
And He will judge between the nations,
And will render many decisions for many peoples;
And they will hammer their swords into plowshares,
and their spears into pruning hooks.
Nation will not lift up sword against nation.
And never again will they learn war.

The most important triumphal entry that you can experience is the one that happens when you receive Jesus as your Lord and Savior. On that day Jesus makes a triumphal entry into your heart by sending the Holy Spirit to dwell within you. The Spirit seals you for redemption and begins to guide you, comfort you, transform you and prepare you for eternal life with your Savior.

If you have not yet reached out in faith to receive Jesus as your Savior, then I urge you to do so immediately by crying out to God to be saved. He has promised “that whoever calls on the name of Yahweh will be saved” (Joel 2:32 and Acts 2:21).

Dwelling in the Presence of the Almighty

Dwelling in the Presence of the Almighty By Tim Moore “Is he — quite safe?…

Water Into Wine By Jack Kelley Some call it a magic trick, to others it…

Can Jesus Christ Be Found in the Old Testament?

Can Jesus Christ Be Found in the Old Testament? By Nathan Jones Tim Moore: This…

John Newton: The Great Shepherd and His Sheep

John Newton: The Great Shepherd and His Sheep By Jordan Chamblee The Bible promises spiritual…