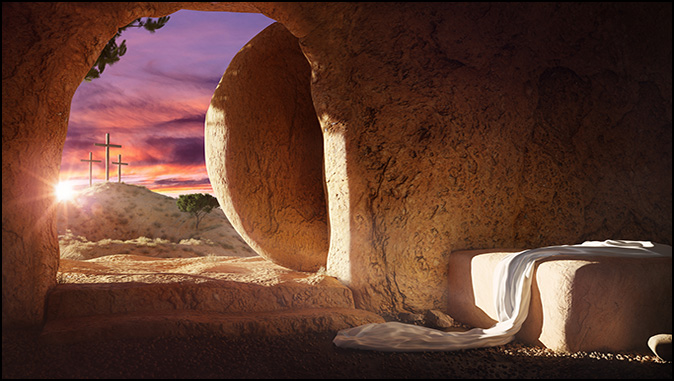 That’s How We Know!
By Jonathan C. Brentner

I wanted to run!

I wanted to run far away from my faith, the church, and especially other believers.

As I sat alongside the church that I had once led as its pastor, I felt more alone than ever before in my life. And, I believed that God had disappointed me.

However, in the midst of my frustration, I also knew that I could not run away from my Savior.

I knew that Jesus had walked out of His tomb, and I understood what that meant. His claims about Himself were true. I could count on His promise of eternal life. I knew He was coming again.

A sermon that I heard on John 6 during my time of despair brought a fresh awareness to me of why I couldn’t abandon my trust in Jesus. In this chapter, we see that many of those who had begun to follow the Lord after the feeding of the five thousand turned away from Him because of His preaching. Upon seeing this, Christ asked His twelve disciples this question as recorded in John 6:67, “Do you want to go away as well?”

Peter’s answer in the following verse sums up what the resurrection means to those of us who know Jesus as our Savior,

“Lord, to whom shall we go? You have the words of eternal life, and we have believed, and have come to know, that you are the Holy One of God.”

Jesus’ resurrection verified the truth of Peter’s assertion. It’s how we know that our faith rests on a sure and unshakable foundation.

It’s how we know that…

Jesus claimed equality with God the Father. In John 10:30 Jesus said, “I and the Father are one.” The Jews immediately picked up rocks with which to stone Him to death because they recognized He was claiming equality with the Father, which they regarded as blasphemy.

In John 14:8, Philip said this to Jesus, “Lord, show us the Father, and it is enough for us.” In response, Jesus told him that he had already seen the Father, “Have I been with you so long, and you still do not know me, Philip? Whoever has seen me has seen the Father” (v. 9).

Jesus claimed to be God in the flesh. His resurrection verifies His bold and confident assertion.

Jesus Is the Only Way to Eternal Life

Jesus made this startling claim in John 14:6, “I am the way, and the truth, and the life. No one comes to the Father except through me.” The resurrection not only verifies His equality with God the Father, but also the validity of the words of this verse. He is only way of salvation for all of humanity, no exceptions.

Perhaps the most recognizable verse in all of the New Testament, John 3:16, echoes this same exclusivity, “For God so loved the world, that he gave his only Son, that whoever believes in him should not perish but have eternal life.” Only those that believe in Him escape God’s wrath and inherit eternal life. Those who reject the Lord’s offer of forgiveness for sin will perish.

The brutality of Jesus’ death also verifies His exclusivity as the only way to the Father. If we could save ourselves by keeping the Law, being moral, remaining sincere in our beliefs, or by being “good,” do you think the Father would have allowed His Son to endure such extreme and cruel agony during the scourging and crucifixion? Of course not!

Jesus suffered and died on the cross because there was no other way for the Father to provide eternal life for us apart from Jesus’ sacrificial death in our place. Out of His great love for us, the Father sent His Son to die so that we would live forever (John 3:16).

We Live in the Last Days

It’s also because of Jesus’ resurrection that we trust the words of Scripture regarding the day in which we live.

Jesus fulfilled forty-eight specific prophecies with His birth, life, death on the cross, and resurrection. He also testified to the inerrancy of the Old Testament Scriptures (see Matthew 5:17-18).

As for the New Testament, Jesus promised that the Holy Spirit would guide the apostles in the writing of more Scripture (John 14:26, 16:12-15). This also applies to Paul, whom the Lord called to be an apostle beginning with His appearance to Saul of Tarsus on the road to Damascus. The apostle Peter, late in his life, equated the writings of Paul with Scripture (2 Peter 3:15-16).

“All Scripture is breathed out by God and profitable for teaching, for reproof, for correction, and for training in righteousness”

Because we believe that God inspired all of Scripture, we also recognize the multitude of signs that the Bible gives us pointing to the approaching Tribulation and thus to the nearness of the Rapture.

A multitude of biblical signs of the last days are coming together as never before in history. Yes, there have been perilous times before in history such as Paul describes in 2 Timothy 3:1-5, but never before with such severity and widespread deception at a time when Israel exists as a nation with plans to build the third temple.

The Bible long ago predicted exactly what we see today as we watch the shadow of the Tribulation grow darker by the day.

I feel a sense of urgency to warn people about what lies ahead, which is why I wrote my recent article Now is the Time.

The Rapture is imminent, but we don’t know how much more we might suffer as the Luciferians of our day work to establish their New World Order. Many believers throughout the world are already suffering because of the globalists’ agenda.

Food shortages and an expansion of the war in Ukraine could bring much affliction to the American people later this year. So many saints here remain unaware of the severe dangers inherent in these things.

For me, Jesus’ words John 14:2-3 provide great comfort in during these perilous times, “In my Father’s house are many rooms. If it were not so, would I have told you that I go to prepare a place for you? And if I go and prepare a place for you, I will come again and will take you to myself, that where I am you may be also.”

There’s joyous hope for us despite the dark clouds on the horizon.

It’s because of Jesus’ resurrection that we remain absolutely confident that He will fulfill His promise in John 14:2-3, which the apostles later expounded upon in 1 Thessalonians 4:13-17, 1 Corinthians 15:51-57, and John 3:1-3. Jesus is coming to take us home to glory (Colossians 3:4). What a wonderful day that will be!!

Our hope rests upon historical certainty of Jesus’ bodily resurrection. That’s how we know all His claims are true.

That’s how we know all of Scripture is God-breathed.

That’s how we know that a joyous celebration awaits us at the Rapture!

Jesus’ resurrection. That’s how we know!