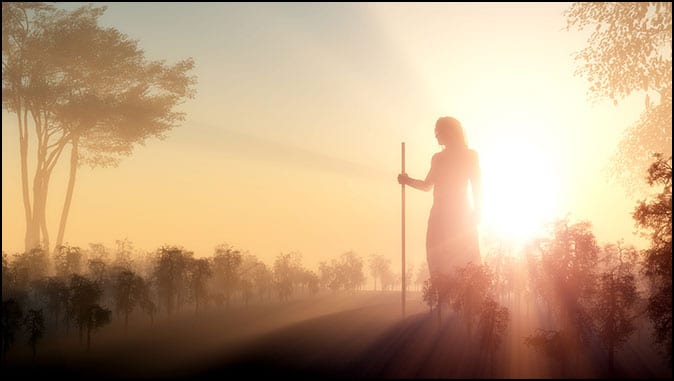 A recent poll claimed that about half of all professing Christians don’t believe that Jesus is God, or that the Holy Spirit and Satan even exist. Smaller but still significant percentages don’t believe that Jesus lived a sin free life or that He is the only way to salvation. This has prompted questions about whether this means they aren’t really saved. I remembered an article on this subject that I wrote some years ago and in response to these questions I have updated and expanded it. I believe it will explain what you have to believe about Jesus to be saved. Let’s read it.

Ever suspect while talking with someone that you may have a mutual friend? Then as you get further into the conversation, you realize that you are describing two different people who happen to have the same name? So it is with discussions of Jesus. The name’s the same, but the descriptions vary widely. Over the years I’ve collected numerous descriptions of men named Jesus. Which one do you know?

First, there’s the Jesus of Judaism. He’s known in Jewish writings as the illegitimate son of Miriam (Mary). He lived in the first century CE (they don’t use AD) and led people away from mainstream Judaism into a cult. His followers were first called Netzerim (people of the branch) and later Christians. In his name Jews have been persecuted unmercifully over the centuries. Jews who admit to believing He was their Messiah are often considered dead to their families. Jews don’t believe in a second coming because they don’t believe there’s been a first one.

Then you have the Jesus of Islam. He was a prophet and teacher on a par with Mohammed. His role was to help prepare people for the great leader from Allah coming at the end of time to judge the world. He was the son of Mary but was not the son of God because the Quran says “God begets not, nor is he begotten.” He didn’t die for the sins of the people because in Islam salvation comes from good works. Neither was he resurrected. Instead, in a time of confusion, God took him alive into heaven and someone else was crucified. He will return at the end of the age to defeat the anti-Christ, call everyone to Islam, and prepare the world for judgment.

The Jesus of Mormonism is a created being, not the Creator. He is the spirit brother of Lucifer and of all humanity. Both Jesus and Lucifer are sons of a god who was once a man. Jesus is often called the Savior but never God, because although he’s one of god’s sons, he is not god. If he is your savior, it gives you the option to be saved, but the work of salvation is still up to you. He’ll return at the End of the Age, having protected his saints through the time of Great Tribulation, to set up his kingdom.

The Jehovah’s Witnesses have a Jesus too. He’s a son of Jehovah, but He’s not God. Rather, he was a perfect man just like Adam originally was. Before he became a man he was the Archangel Michael, who The Witnesses believe to be Jehovah’s first created being. Just believing in Jesus is not enough to save us. we also have to become a Jehovah’s Witness, be baptized, and obey God’s laws all of our lives to prove ourselves worthy. Their Jesus wasn’t physically resurrected but came back to life in Spirit form. He returned to Earth in Spirit form in 1914 and will become a physical being again at Armageddon.

Then there’s the Jesus of the liberal denominations. He’s a first-century man who lived an exemplary life of such gentleness and grace that it was almost as if he was God. He’ll see that everyone who joins their denominations gets accepted into heaven whether they’re born again or not. Some proponents of liberal theology claim that he’ll also see that everyone who was sincere in whatever other religion they practiced will get to heaven too. For the most part, liberal denominations don’t believe in the literal fulfillment of End Time events. For many, the 2nd Coming happened to each person when they first believed in Jesus.

The New Age Jesus is really one of the oldest. He originally appeared in first-century Gnosticism. This Jesus was a man who like 40 other “ascended masters” holds the key to knowledge (gnosis) that when learned will bring about the next phase of human evolution, a spiritual growth that will finally make peace on earth possible. He didn’t die for our sins because there’s no need for us to be saved.

You’ll find variations on these six themes in nearly every major religion and cult around today. It seems everyone wants you to think they know a man named Jesus, even if they have to redefine him to suit their beliefs.

But there is one more man named Jesus. He is not a created being. He is our Creator. As Paul wrote in Colossians 1:16, “By him all things were created: things in heaven and on earth, visible and invisible, whether thrones or powers or rulers or authorities; all things were created by him and for him.” He’s not an angel and he’s not a mere man because He created both. The archangel Michael might be the first created being, but if he is, Jesus is the one who created him. And Lucifer may have many brothers, but if he does, Jesus created them all.

This is the Jesus of the Bible. He claimed to be God in the form of man (John 10:30 and 14:9). Men who knew Him agreed. Paul taught the Deity of Jesus in Colossians 1:15-16. So did John (John 1:1-3). The writer of the Book of Hebrews also agreed (Hebr 1:3) and included a quote from Psalm 45:6-7 that shows God Himself addressing Jesus as God (Hebr 1:8). And this is not just a New Testament idea. In his prophecy of the Messiah’s birthplace, Micah said He was an eternal being whose goings forth were from days of eternity. Literally from before time and perpetual. (Micah 5:2) He is the eternal God.

Is This a Cult?

Three things distinguish Christian cult beliefs from orthodox theology. The cults deny the doctrine of salvation by grace alone. You have to earn at least part of the salvation they offer. They also deny the notion of eternal punishment for sin. Everyone goes to some kind of Heaven. And most importantly, they deny the deity of Jesus. They portray Him as a great man and role model; a great teacher, a prophet, even a social revolutionary, but certainly not God.

In truth, Jesus was all of that. But He was also much more. He was God in the form of man; the Father dwelling in the Son (Col 1:19). To think of Jesus as anyone other than God is to reject the truth concerning Him revealed throughout His Word, and to put yourself at risk of trusting in the wrong Jesus for your eternal destiny. The Jesus of the Bible is the only one of the seven men named Jesus who is able to save you. Selah.