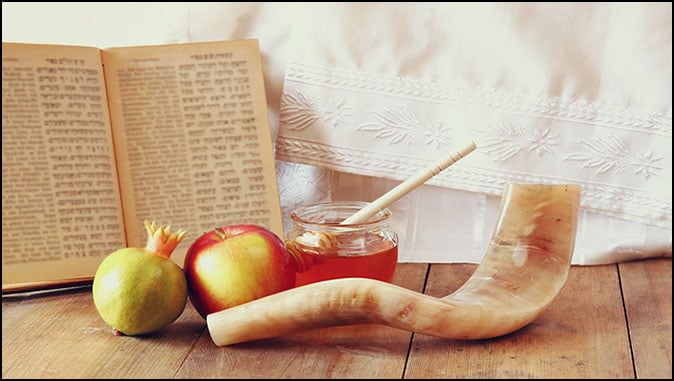 This is the time of year when Jews everywhere celebrate Rosh Hashanah, literally “head of the year.” Although just before the Exodus the Lord changed the calendar so that the year would begin in the spring (Exodus 12:1) the Israelites continued to celebrate the New Year in the fall since Rosh Hashanah is an important date for other reasons.

For instance it marks the beginning of the Days of Awe, the period between Rosh Hashanah and Yom Kippur when according to their religion Jews have 10 days to apologize, confess, and wherever possible make restitution for all the wrongs done to others during the year just ended. Tradition holds that in Heaven, books that record all the deeds of man are reviewed at the end of each year. If a person has been so totally unrighteous that no rehabilitation is possible, he or she is scheduled for death in the coming year. If a person has been so perfect that the book contains no demerits, he or she is immediately granted another year of healthy, prosperous life. Since very few people fit into either of those categories, for most Jews the books are held open for 10 days to give them a chance to clean up their act. On Yom Kippur, the books are closed, their behavior becomes a matter of record, and they’re held accountable for it.

But there’s another even more profound significance to Rosh Hashanah that has been obscured in our history due to the influence of pagan religion in our lives combined with the concerted effort made in the 4th Century to deny the Jewish roots of Christianity. It has to do with the birth of our Lord.

Celebrating the Lord’s birthday on December 25 is a tradition that’s probably only about 1300 or 1400 years old. “Wait a minute” you say, “There’s a 600 year gap. What did people do before then?” Let’s find out.

First, we believe the December date came to be as a result of the integration of Christianity into the Roman Empire as first a permitted belief and later the official religion of the Empire. Previously, it had been outlawed and its practice punishable by death. But the Emperor Constantine changed all that, the worship of Jesus was made legitimate, and in the 4th century what was to become the Holy Roman Empire was born.

You know how deeply ingrained traditions become. For several hundred years the pagan Feast of Saturnalia had been a part of Roman life, celebrated at the time of the winter solstice. Rather than upset the tradition, after Christianity was legalized this feast was declared to be the day of our Lord’s birth. Knowing its origin many Christians did not accept this date and for several hundred years refused to celebrate it as such. Hence the gap.

To find out His real birthday requires some detective work, and the biggest clues come to us from John the Baptist. John was six months old at the time of the Lord’s birth and discovering his birthday is somewhat easier so let’s start there.

Zechariah and Elizabeth, John’s parents, had been unable to have children. Then the Angel Gabriel visited Zechariah during one of his tours of duty in the Temple (Luke 1:8-11). Zechariah was the priest chosen by lot to offer prayers at the Golden Altar just outside the Holy of Holies. This was already a once in a lifetime honor but Gabriel’s appearance made it even more unique. Only twice before had an event like this taken place, and all involved barren women and Messianic promise. Hannah was given a son Samuel who later anointed David King of Israel. The mother of Samson was told her son would begin the deliverance of Israel from the Philistines. And now Zechariah was being told that his son would be the one to proclaim the coming Messiah.

We have to assume that wanting a son more than anything (it was a woman’s crowning achievement in that era, whereas being barren was considered a punishment from God) Zechariah and Elizabeth went about the process of conception immediately upon his return home. So when was that?

King David had divided the priests into 24 courses (divisions) to serve rotating one-week periods in the temple. All 24 divisions served during the Feasts and so each one also served twice a year on rotation. The religious year began about mid-March on our calendar and right away there were nearly three weeks of preparation and Feasts; Passover, Feast of Unleavened Bread, and First Fruits. Then the divisions began their rotation.

Comparing Luke 1:5 to 1 Chronicles 24:10 shows that Zechariah was of the division of Abijah, number eight in the weekly rotation. Counting the time all were on duty and the eight weeks in rotation when Zechariah’s turn came puts the visit by Gabriel about 3 months into the religious year. A normal 9 month gestation period places the birth of John the Baptist at the beginning of the following religious year (mid-March, remember) and indeed there are many who believe he was born on Passover.

Let’s convert this to our calendar to avoid further confusion and discover a fascinating possibility about December 25th. In all probability John the Baptist was conceived in mid June and born the following March. According to Luke 1:36 Mary conceived in the sixth month of Elizabeth’s pregnancy. That means that our Lord was conceived in late December and born in September. Are we inadvertently celebrating His conception at Christmas instead of His birth?

Among Messianic Jews there are two primary schools of thought concerning the September birth. Both have valid points and both are based on the notion that the Jewish Feasts all have both historical and prophetic significance. One places the Lord’s birth at the Feast of Tabernacles since that feast commemorates the time of the Lord’s dwelling with His people. The other places the Lord’s birth on Rosh Hashanah because according to Jewish tradition both the Earth and Adam were born on that day and the Lord is the “Last Adam” (1 Cor 15:45). For this reason as well as the prevalence of trumpets in its celebration (it’s also called The Feast of Trumpets) and other factors I personally prefer Rosh Hashanah and believe that the 2nd Coming will also take place on this day. But regardless of which date you prefer, from all that the Bible, Jewish tradition and Church history tell us, early fall is the time to sing “Happy Birthday, Lord Jesus.”