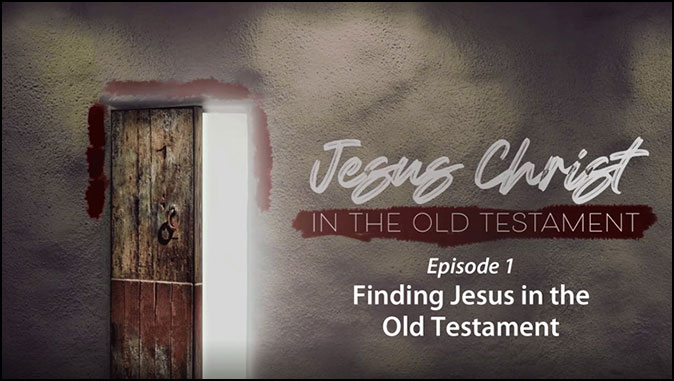 Can Jesus Christ Be Found in the Old Testament?
By Nathan Jones

Tim Moore: This week marks the beginning of an all-new Christ in Prophecy teaching series focusing on Jesus in the Old Testament. Befitting the name of our show, we’re going to be highlighting — Christ in Prophecy!

Nathan Jones: For 19 seasons now, our television program has been proclaiming the soon return of Jesus Christ. We believe that glorious event will take place in the near future with the Rapture of the Church. In that regard, Jesus is coming soon for those who have put their faith in Him. It’s an imminent event, meaning that the Rapture could happen at any moment. Are you ready?

Tim Moore: That’s right! The focus of this program is Christ in prophecy. But, while we wait for what Paul called our “blessed hope,” we believe we should dive into the Old Testament to learn what the Bible teaches about our soon-returning King.

Tim Moore: So, in order to better understand our great God and Savior — the Alpha and the Omega, the Beginning and the End — we’re going to spend this week’s episode laying the foundation. And then, in our next episode, we’ll travel to the very beginning, starting in Genesis 1, where the triune God testifies that He is our Creator.

Nathan Jones: Tim, when thinking about Jesus in the Old Testament, what are some of the more common examples that come to your mind?

Tim Moore: I think the most recognizable ones are Jesus the Messiah as the Suffering Servant, as outlined in Isaiah 53. Psalm 110 refers to the Lord’s Anointed being a priest forever according to the order of Melchizedek, referenced all the way back in Genesis. Then there’s the blood of the Passover Lamb found in the book of Exodus and remembered even today in Passover seders.

Nathan Jones: Those are all excellent examples. How interesting that each of your examples falls into what’s called a Christophany. Christophany means an appearance or manifestation of Christ.

For the first category, the Isaiah 53 reference to the Messiah as being the Suffering Servant falls into probably the broadest category that most people think of, and that is called the Prophetical Christophanies. The Prophetical category includes the outright prophecies that prophesy about the Messiah.

Tim Moore: The second category would be the Historical, referencing actual people who foreshadowed the coming Messiah. Those would include people like Adam who was the first man, and the preacher of righteousness Noah who was delivered from God’s wrath in the Flood. Also, Moses was a deliverer of his people from captivity. King David was a man after God’s own heart. Solomon was full of wisdom. And, one of my favorite Christophanies — Joseph who was rejected by his brethren, was sent into a foreign Gentile land, and yet, he delivered his people from starvation and ended up being Israel’s savior, if you will, in a time of crisis.

Nathan Jones: The third Christophany category is called Ceremonial, as in what is used in religious ceremonies. Back to Jesus, who is our Passover Lamb, the sacrifice of the Passover lamb points to Jesus who died on the cross in our place. Just like the blood that was brushed over the doorpost of the Jewish slaves’ houses in Egypt, Jesus’ blood covers over our sins so that the angel of eternal death passes over us.

One of my favorite examples of Ceremonial Christophanies is the Brazen Serpent. During the Exodus, while the Israelites wandered around the desert and were plagued by snakes, God commanded that the Brazen Serpent be forged and lifted up over the people. When the people looked at it, they were healed. Likewise, Jesus was lifted up on the cross, and when mankind looks to Him in faith, He heals us of our sin.

Then there’s the Feast of Tabernacles. The whole feast points to the promise that one day our Messiah will be living with us, meeting with us, tabernacling with us, during the Millennial Kingdom.

And then there are all of the ceremonies and cleansing rituals involving the Temple and the priesthood that point to the Messiah cleansing us of all of our sins.

The Importance of the Big Picture

Tim Moore: So many Christophanies in the Old Testament point us to Jesus Christ, which is why it’s such folly for those Christians who proclaim themselves to be only “New Testament Christians,” as if we could dismiss the entire Old Testament when it points right to Jesus Christ. The Old Testament likewise holds relevant lessons that impact our lives today. People often don’t realize that Jesus and the Apostles cited the Old Testament because it was the only Scripture that they had. And again, they were citing it because time and time again it pointed to the coming Messiah. The overall Bible tells the story of God’s plan of salvation.

But, sadly, too many contemporary Christians see the Old Testament as a collection of disjointed stories. We teach our children about Noah and the Ark, David and Goliath, Jonah and the Whale, but we do so as stand-alone stories of faithfulness and triumph without providing their Big Picture context into God’s plan of redemption. The result is that too many young people equate these disconnected stories from the Bible with fairy tales that begin “Once upon a time…” They don’t see these true stories as part of God’s overarching narrative, just as isolated stories. Lately, there’s been a dramatic falling away of young people from the Christian faith, and I believe their abandonment is directly tied to the poor communication the Church has often used to communicate God’s own testimony throughout history — His-Story.

Nathan Jones: Absolutely true. For instance, let’s look at the story of Jonah and the Whale, or the Big Fish, that most people believe is merely a children’s bedtime story. Parents decorate their nurseries with pictures of the animals in the Ark. But, Jesus pointed out that the story of Jonah was actually a sign. Jesus said in Matthew 12, “For just as Jonah was three days and three nights in the belly of the sea monster, so shall the Son of Man be three days and three nights in the heart of the earth.” Jonah was swallowed by the big fish and seemed to have “died” for three days, and then once vomited on the land, Jonah come “back to life.” Jesus provided this Christophany at the time to those who were questioning His messiahship. Jesus instructed the people to look for the sign of Jonah, saying to the effect, “When I am in the ground three days and come back, then you’ll know that I am the Messiah.”

To begin your journey finding Jesus Christ in the Old Testament, watch Christ in Prophecy!

Water Into Wine By Jack Kelley Some call it a magic trick, to others it…

John Newton: The Great Shepherd and His Sheep

John Newton: The Great Shepherd and His Sheep By Jordan Chamblee The Bible promises spiritual…