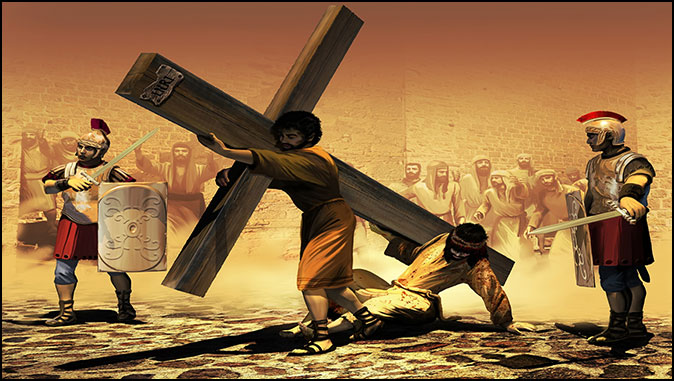 A Third Of A Mile
By Dr. Mike Murphy

We had travelled so far to get to the city that day. Days at sea, then two more days we walked to get there. Travelling that distance so my sons might also experience Passover that year, and see my beloved city for the first time. But as we neared the city, I could all but sense the change. The bitterness and the anger greeted us before we could even get to the gates. Something had changed my city. Something that I would later learn, would change my beloved city forever.

As we approached the gates the crowds were overwhelming. Lining the streets in anticipation of something that was soon to occur. I grabbed hold of each of my sons, so not to let them be separated from me by the mobs that seemed to be pouring out from every corner. Crowds that just kept screaming words of hatred, unmercifully mocking a man whose name I did not even know. And as the crowds gathered even more, I soon realized that we were going to have to stand in the midst of that crowd until the event that had caused the mob to gather had passed. We could simply never make our way to the Temple by trying to fight through all these people.

Suddenly, at a distance, I could see a man stumbling as he walked the street. A man, that as he drew closer, was so beaten, so battered, that even his own family must not have been able to recognize him. A man, who was so weak, he could barely carry himself, much less the cross they made him carry. As he approached the place my sons and I were standing, I watched as he suddenly collapsed. Falling hard onto the stones that lined the streets. So hard, I immediately doubted he could still be alive. But slowly, I watched as his fingers began to move, and with shallow breaths, I could see the little life left in him. As the soldiers forced him again to his feet, I thought to myself, this man cannot even carry himself, much less the weight that must come from that cross.

Before I even realized what had happened, a soldier reached to grab me, separating me from my sons, ordering me to pick up this man’s cross. I tried to plead with them to choose another, as I had my sons there with me. But it was as if my words were silent, as the soldier continued to drag me into that street.

As I was handed that cross, all I could think of was the blood that covered it. Blood that would stain me, leaving me unclean to attend Passover, unable to fulfill the purpose I had come for, the reason I had brought my sons to my once beloved city. As I reached for that cross, and the soldier placed it on my shoulder, I could feel the blood completely covering me. So much blood that it was all I could do to even get a grip. I remember thinking to myself, how could any man even have this much blood? How could this much blood pour out from a man and him still be alive, much less carry this cross?

So many steps we had taken before I looked over to see this man who was carrying this cross with me. So many steps we had taken where I had felt nothing but anger at this man, for putting me in this position. So many steps of having the crowd spit on me, as they spit at him. Throwing anything they could find at me, as they lashed out at this man. With each step, I not only feared for my life, but feared my two sons might see my life taken before their very eyes. But as I glanced in this man’s eyes, the strangest of feelings came over me, It was not hatred, denial, disappointment, or even agony I saw as I looked into those eyes. All my eyes would allow me to see was a love that pierced all the way to my soul. And as we arrived at the top of that hill, where they were preparing to crucify him, I suddenly found my eyes could not look away. As my sons ran to me, I stood in front of them with eyes full of tears. Tears, that no matter how hard I tried, I could not make stop. I watched as they raised him on that cross I had helped him carry. I watched as he struggled in pain to take each breath. I listened as he called to the Lord, not to curse all who had placed him on that cross, but asking for their forgiveness. I watched as he offered that same forgiveness to a guilty man who hung on the cross beside him, telling that man how hope would be his eternal. And I watched as the sky turned to darkness as his final breath left his body.

I watched that day as I saw it all, knowing in the depths of my heart, I had just seen all. And in that moment, I could so vividly hear the words of the Lord speaking to me. Words from Him, that reminded me of the promise Isaiah had brought to my people. Words I had not read for years, but words I would never again forget. Words that said, ‘Surely our griefs He Himself bore, and our sorrows He carried; Yet we ourselves esteemed Him stricken, smitten of God, and afflicted. But He was pierced through for our transgressions, He was crushed for our iniquities; the chastening for our well-being fell upon Him, and by His scourging we are healed.’

In that moment, as I watched them take down His limp and lifeless body, I realized that I did not have to go to the Temple that day, nor ever would again. The Lord had not brought me to Jerusalem to see the lamb sacrificed, but so I might experience and witness the sacrifice of the Lamb. In that moment, I realized the blood that now covered me had not left my clothes stained, but had washed me as white as snow. Because the Lord showed me on that day, it was not me who was carrying His cross. It was He, for each step of that third of a mile, who had been carrying mine.

With each step, I pray you remember who is carrying your cross today.

Our Passover Lamb By Joseph Parker "Your lamb shall be without blemish, a male of…

Jesus: I AM. By Dr. Mike Murphy “I thought these eyes had seen everything. That…