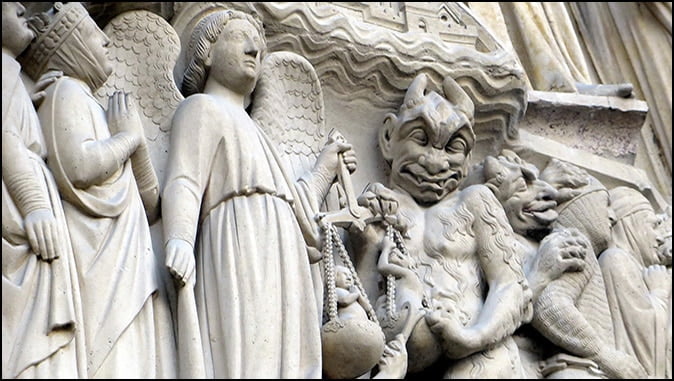 Ye Shall Be As Gods
By Jack Kinsella

“Religion” is system of worship whereby man attempts to make himself acceptable to his God. That is why the word can be universally applied to any system of theology.

Of all the world’s great religions, the only one for which the appellation ‘religion’ is wholly inaccurate is that of Christianity.

Religion, with all its rituals, sacrifices and dogma, is man’s way of making himself acceptable to God, while Christianity is a system where God makes man acceptable unto Himself.

That is not a distinction without a difference. Christianity is the mirror image of ‘religion’ — its core doctrines might even be called ‘anti-religious’.

Religions demand adherence to certain rules and regulations as a condition of salvation. Those rules are compiled by religious men, set forth as the defining characteristics of that religion, and followed by its religious adherents, if they are to remain in good standing with their religion, and therefore, with God.

Religion, in all its forms, is a series of theological laws that must be kept by its followers in order to make themselves acceptable to whatever their understanding of God might be. Christianity is accepting God’s definition of Himself.

“Then one of them, which was a lawyer, asked him a question, tempting Him, and saying, Master, which is the great commandment in the law?”

Loving God above all things and loving one’s neighbor as oneself is God’s ‘law’. Religion is a man-made substitute system that offers alternative choices. Historically, more wars have been fought over religion than any other cause, many in the name of the ‘Christian religion.’

But Bible Christianity teaches that our war is this life is spiritual; “not against flesh and blood, but against principalities, against powers, against the rulers of the darkness of this world, against spiritual wickedness in high places.” (Ephesians 6:12)

That is not to say true Christians are forbidden to go to war, as in the case of the current war on terror. Christians are not OF this world, but we are IN it.

As secular national citizens, Christians are admonished “to be subject to principalities and powers, to obey magistrates, to be ready to every good work,” (Titus 3:1) But that is not the same as banding together to conquer for Christ’s glory. That is a religious concept, not a Christian one.

The true source of religion — and its underlying concepts — was revealed in Scripture BEFORE the fall of Adam.

“For God doth know that in the day ye eat thereof, then your eyes shall be opened, and ye shall be as gods, knowing good and evil.” (Genesis 3:5)

Let’s break the oldest lie in the Book down into its component elements;

The serpent begins by hinting that God is deliberately withholding beneficial information from them. The argument that some Scriptures seem to require salvation by faith plus works, while others seem to support eternal security stems from that seminal deception — that God’s Word is ambiguous when examined closely.

It goes against the grain of human pride to believe that the only role we play in our own salvation is to accept a free gift of unearned pardon. Most human religions — including most Christian denominations — insist that mankind play some role in his redemption.

In this view, the sacrifice of the Cross is not enough — it is just a kick-start that gets us going. We must then perform at a certain level or that sacrifice is negated by our own failed efforts.

This goes back to the belief that we humans can know WHICH sins are sufficient to disqualify us from heaven and which ones God will let slide because they weren’t as evil — which is the ONLY rationale for rejecting the doctrine of eternal security.

The Lord’s standard for salvation by works is somewhat harsh:

So religion attempts to rewrite the rules, claiming unto itself special righteousness and understanding provides it with insights that make it unique in that it ‘seeketh after God’, claiming unprofitable rituals and sacrifices are now profitable, and organizing itself to ‘do good.’

Religious Christianity is a system that substitutes its own, more attainable standards of conduct for God’s standard of perfection, adding temporal punishments and penalties as atonements for the inevitable failure of its adherents.

The Bible says of believers that we ARE: “God’s family” (Galatians 3:26, 1st John 3:2), effectively ALREADY “seated in the heavenlies with Christ” (Ephesians 2:5-6) and “translated into the kingdom of His dear Son” Colossians 1:13)

Eternal security is NOT a license to sin. It is important to understand that eternal security does not apply to a person who merely professes Christ. Salvation demands repentance.

Repentance means a change of mind resulting in a change of life. The person who has never changed his mind about God, sin, Christ, the Bible, etc., has never repented and has never been saved.

Rather than granting license to sin, the Bible teaches that the grace of God actually motivates believers to serve God with a thankful heart. (Romans 2:4, Ephesians 3:14,-19, Titus 2:11-14)

Logically, to deny the doctrine of eternal security is to embrace religion as an acceptable way to please God.

“If any man’s work shall be burned, he shall suffer loss: but he himself shall be saved; yet so as by fire.” (1st Corinthians 3:15)

Religion doesn’t save us. It can’t keep us. There is only One Who can “keep you from falling, and to present you faultless before the presence of His glory with exceeding joy.” (Jude 1:24)

The Historical Resurrection of Jesus Christ

‘Christianophobia’ in the Last Days

The Difficult Doctrine of the Trinity

The Fellowship By Jack Kinsella The dictionary defines the noun, ‘fellowship’, as follows: ”a friendly…