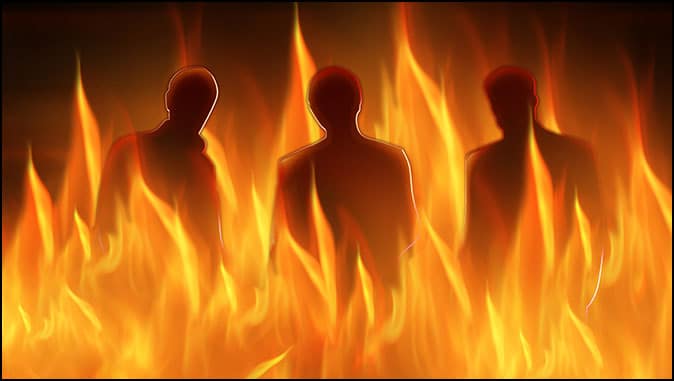 Would a Loving God Send People to Hell?
By Jack Kinsella

Generally speaking, that is the first objection the world raises when introduced to the God of the Bible as He reveals Himself to man.

If God TRULY ‘so loved the world that He sent His only begotton Son’ to save us from hell, then why did He create Hell in the first place? And having created it, why did He create man and then allow him to sin?

To the atheist or the skeptic, these seem to be logical, valid questions, but the questions are based on false assumptions about the God of Scripture. For example, “could God create a rock so big He can’t lift it?”

It seems logical at first glance. But what the question is really asking is, “if God is so all powerful that He is powerful enough to fail?”

The first false assumption about God is that, because God loves us so much, He ought to let us do what we want. But the permissive kind of love they ascribe to a ‘loving’ God, when applied to children, doesn’t produce loving children. It produces spoiled brats.

In addition, God’s moral laws have a purpose, as evidenced by the precision with which He put together the universe. The laws that govern the physical universe are so precise that we can calculate the positions of planets, stars, and galaxies thousands to millions of years into the future.

It is our obvious failure to keep these moral laws that leads humans to seek redemption and salvation in the first place. We can’t help it. Even an atheist, if he is honest, will admit that at some time in his life, he did or said something he was sorry for. Humans are built that way.

So why doesn’t God make everyone into perfect beings and allow them all into heaven? It would actually be more cruel if God were to do this, since many people prefer hell to the alternative (complete submission to God).

All the people who end up going to hell will have done so because they actually prefer hell to being forced into the presence of God for all eternity. It is their choice to make, and many make it with eyes wide open. People like to live in their favorite sins and answer to no one else.

They know that if they accept Jesus as Lord and Savior that God will want them to change their lives and they might have to give up some of their autonomy. We’ve all witnessed to somebody at some time who said something like, “I’ve a window seat reserved in hell” or, “I don’t mind going to hell. All my friends will be there.”

Clearly, God isn’t SENDING them to hell. On the contrary, He provided a way for man to avoid hell, but He also gave man free will to choose. Being compelled to worship God isn’t worship. Since God created spiritual beings for the purpose of expressing love, those beings must have complete free will in order to express that love.

Of course, free will allows for the possibility of those beings rejecting God and His plans. The skeptic and atheist argue that God will just let them into heaven because they have behaved about as good, and maybe even better, compared to the rest of the people on earth.

But to God, any sin excludes entrance into heaven. The next argument the skeptic will present is that God isn’t fair. It isn’t fair that only some people will get to go to heaven, while the rest will go to hell.

The answer to this one is easy. They are right. If God were fair, EVERYBODY would go to hell. Nobody can live a sinless life, even after they are saved and their sins are washed away.

Therefore, God has made a provision to erase all sins that we have committed in this life and to perfect us so that we cannot sin in the next life. That provision for sin is through the sacrifice of God’s Son, Jesus Christ. Jesus took the punishment that we deserve and gives us the reward that we do not deserve – eternal life. That is mercy, not fairness.

In accepting Jesus as Lord and Savior, all our sins are erased, and Jesus works to change us into His image. On the other hand, ‘fairness’ demands all who have sinned and come short of the glory of God be judged according to their works. Instead of fairness, God extends mercy to those who ask for it.

It is the atheist and the skeptic who will experience God’s ‘fairness’ when they stand before Him. I’d rather stand before a merciful Judge than a ‘fair’ one, anytime.

The skeptic and the atheist scoff at the nature of salvation, saying anything that is ‘free’ is worth what you pay for it. While salvation is a gift of grace and not of works, one can’t exactly say that salvation is free. There is a cost.

But the skeptic or atheist who prefers to hang onto these traits can choose to go to where these traits DO exist. Every human was created in God’s Image, with an eternal, spiritual component. We will all spend eternity somewhere. If not heaven, there is only one choice remaining. That is hell.

Does a loving God send people to hell? No. People CHOOSE hell. What a loving God does is provide a choice. The atheist or skeptic can choose to stand before a fair God, or a merciful One. In either case, they can’t blame God then for the consequences of choices that they make now.

God allows each of us to choose, but as to the question at hand, “Does a loving God send people to hell?”, God answers it directly:

“Say unto them, As I live, saith the Lord GOD, I have no pleasure in the death of the wicked; but that the wicked turn from his way and live.” (Ezekiel 18:32)

And the End Shall Be With a Flood

Still The Greatest Story Ever Told

Thorns in the Flesh

The Indictment By Jack Kinsella According to the Bible, one day as Jacob was cooking…

Losing It? By Jack Kinsella According to the figures maintained by the CIA World Factbook…