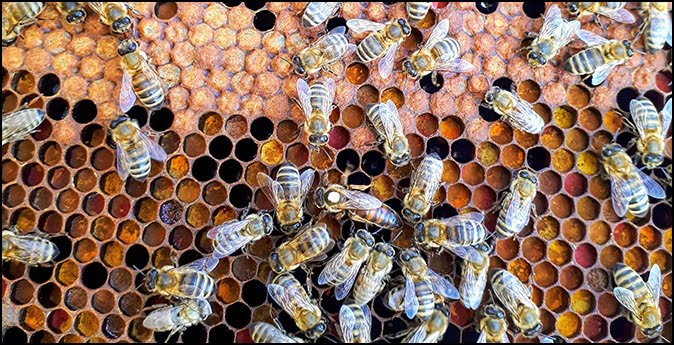 What’s the Buzz — Or Lack of It?
By Jack Kinsella

A mystery malady known as ‘colony collapse disorder’ has destroyed from fifty to ninety percent of honeybee colonies in the United States and Europe.

In Great Britain, London beekeepers said starting at the end of 2006 that up to three-quarters of their bees have either died or simply ‘vanished’. John Chapple, head of the London Beekeepers’ Association, said that when he opened his 40 hives after the winter, only 10 were unaffected by a mystery plague. Twenty-three of the hives were empty and seven contained dead bees.

In North America, Colony Collapse Disorder (CCD) has been reported in Canada, and in at least 24 US states.

In a legislative hearing before the House Subcommittee on Horticulture and Organic Agriculture in March, Gene Brandi, a Merced County (California) beekeeper and chairman of the California State Beekeepers Association, told lawmakers that while bee losses are not uncommon, the current ailment plaguing bee colonies is much more serious.

“Even though my loss is substantial, other beekeepers throughout the country have suffered much great losses,” he says. “Beekeepers who lost over 50 percent of their colonies will have difficulty making up their losses from their own colonies as I plan to do.”

The cause of colony collapse disorder is unknown, although poor nutrition, mites, diseases and pesticides have all been suspect. There is also concern that some genetically modified crops may be responsible. But nobody knows for sure.

The only thing that is seems certain is that, as Speigel Online reported last month, “the phenomenon is gradually assuming catastrophic proportions.”

This is a much more important story than the mainstream media yet realized in 2006. CCD is not simply a case of entire colonies of bees just dying in the hive. If that were the case, then the cause could be determined and dealt with.

There are lots of diseases and parasitic mites than can wipe out a bee colony. But Colony Collapse Disorder refers to the total disappearance of whole bee colonies — the BBC calls it VBS, or “Vanishing Bee Syndrome“.

According to Wikipedia “a colony which has collapsed from CCD is generally characterized by all of these conditions occurring simultaneously:

– Complete absence of adult bees in colonies, with no or little build-up of dead bees in or in front of the colonies.

– Presence of capped brood in colonies. Bees normally will not abandon a hive until the capped brood have all hatched.

– Presence of food stores, both honey and bee pollen: (i) which is not immediately robbed by other bees. (ii) when attacked by hive pests such as wax moth and small hive beetle, the attack is noticeably delayed.”

Normally, a weakened bee colony would be immediately overrun by bees from other colonies or by pests going after the hive’s honey. That’s not the case with the stricken colonies, which might not be touched for at least two weeks, said Diana Cox-Foster, a Penn State entomology professor investigating the problem.

To summarize, for reasons unknown, millions of bees just pack up and abandon their hive, leaving everything behind. Nobody knows where they go. They just disappear.

Sounds like the kind of story one tells to kids over a campfire, but it’s true.

How important are honeybees? According to Greg Hunt, assistant professor of entomology at Purdue University, a common refrain throughout the beekeeping industry is that we can thank these busy pollinators for “one out of every three bites of food we eat.”

Crops in the United States that rely on these pollinators include 300 different nectar-producing plants and trees, including all vine crops, such as cucumbers, squash, melons and pumpkins, and also all fruits.

Honeybees pollinate the alfalfa that feeds the cattle that make the milk our children drink. They’re responsible for one-third of human nutrition.

Bees are not only needed to make honey, they are critical in the pollination of almonds, apples, grapes, cherries and cauliflower.

Honey production in the U.S. generates more than $150 million annually, while crop pollination is valued at $14 billion a year, according to a Cornell study.

A complete collapse of the US honeybee population would be catastrophic to America’s food supply, which would wreak even greater catastrophe world-wide. (America isn’t going to export food if there isn’t enough for its own population).

Famine is a central theme of Bible prophecy for the last days.

“For nation shall rise against nation, and kingdom against kingdom: and there shall be FAMINES, and pestilences, and earthquakes, in divers places.” (Matthew 24:7)

“And great earthquakes shall be in divers places, and FAMINES, and pestilences; and fearful sights and great signs shall there be from heaven.” (Luke 21:11)

“Therefore shall her plagues come in one day, death, and mourning, and FAMINE; and she shall be utterly burned with fire: for strong is the Lord God who judgeth her.” (Revelation 18:8)

“And I heard a voice in the midst of the four beasts say, A measure of wheat for a penny, and three measures of barley for a penny; and see thou hurt not the oil and the wine. And when he had opened the fourth seal, I heard the voice of the fourth beast say, Come and see.”

“And I looked, and behold a pale horse: and his name that sat on him was Death, and Hell followed with him. And power was given unto them over the fourth part of the earth, to kill with sword, and with HUNGER, and with death, and with the beasts of the earth.” (Revelation 6:6-8)

Most Christians in the Western developed world have always looked at the Biblical prophecies concerning famine the way they USED to look at prophecies of pestilences, or deadly infectious diseases — as Third World afflictions.

By the mid 1960’s, Western medicine had all but eliminated all the ancient killers — only to see the rise of new killer diseases and the resurgence of new antibiotic resistant strains of the old ones. By the 1990’s it became painfully obvious that the developed West had become as susceptible as the underdeveloped Third World.

Like pestilence, the idea of widespread famine across the developed world used to seem impossible. But a headline in South Florida Sun-Sentinel summed up the threat from CCD this way: “Without Bees to Pollinate Crops, We Won’t Have Food“.

It doesn’t seem so impossible anymore.

Note: Although the bee population was not a big concern in the media back in 2007 when this brief was originally published, Monsanto is big news today. A recent colum reports that;

“Monsanto has decided to buy out one of the major international firms devoted to studying and protecting bees. According to a company announcement, Beeologics handed over the reins to Monsanto back on September 28, 2011, which means the gene-manipulating giant will now be able to control the flow of information and products coming from Beeologics for colony collapse disorder (CCD).” (emphasis mine)