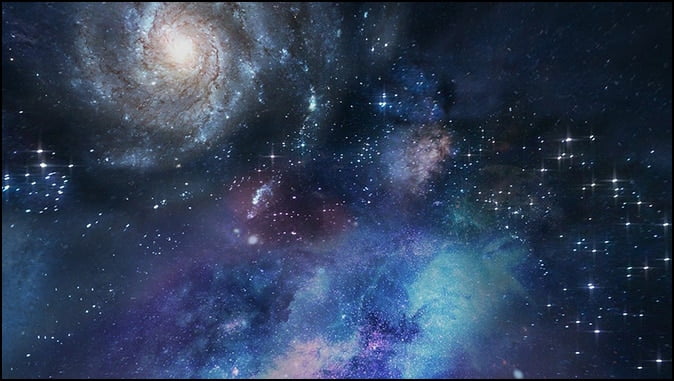 Universe as God?
By Jack Kinsella

Secular science, ever vigilant against interpreting their observations as evidence of a Creator, has decided that the universe is eternal.

Such is the latest pronouncement coming from the hallowed halls of science.

It is incredible to me that so many are willing to settle for science as their deity. Science has intoned solemnly that the universe began with a Big Bang and has been expanding ever since. Then, science announced that the universe is actually shrinking, imploding, if you will.

Scientists discovered that neutrinos are moving in the wrong direction and intoned their findings.

Now, the universe isn’t shrinking or expanding anymore. It is eternal, driven by what they call a ‘dark force’.

Two scientists have put forward a new model to explain how the cosmos is and where it might be going.

They say it is necessary to take account of startling new discoveries – in particular, the observation that everything in the Universe is moving apart at an accelerating rate.

Paul Steinhardt and Neil Turok propose the idea that the cosmos goes through an endless cycle – of Big Bang, expansion and stagnation – which is driven by an as yet unexplained “dark energy”. [at this point, I am almost vibrating — “as yet unexplained ‘dark’ energy?” The Energy that drives the Universe is clearly explained. The Bible calls that Energy ‘God’.] They published their findings in the journal, ‘Science’.

Even some secular science writers who understand this stuff better than I do also know better. Cosmology writer Marcus Chown concedes it will be extremely difficult to finally prove any model of the Universe.

“The history of cosmology is the history of us being completely wrong,” he told the BBC. “I mean, cosmology is the hardest of all sciences; we sit on this tiny planet in the middle of this vast Universe, we can’t go anywhere and do any experiments – all we can do is pick up the light that happens to fall on us and deduce some things about the Universe.”

I am admittedly not a scientist and confess I have no faith in a system that changes directions more often than Barack Obama. But I am relatively conversant with the scientific system outlined by the Bible.

It wasn’t Columbus who discovered the earth was round. The Bible tells us that in Isaiah 40:22. Although secular science learned about germs and microbes in the past century, the Bible testifies to the spread of germs.

The ancient Hebrews were warned that he that toucheth a dead body shall be unclean for seven days Numbers 19:11. The foods specified as unclean, like ferrets, moles, weasels, mice — all carry disease. [Levitcus 11] Other unclean foods like pork or shellfish carry bacteria that can be deadly long before the senses can tell it is spoiled.

The Bible’s admonitions about washing, cleanness and uncleaness, care around dead bodies, warnings about eating the flesh of animals that die of natural causes; all indicate an advanced knowledge of germs and their method of transmission.

The information was there for thousands of years. Like that ‘dark energy’ science is now desperately seeking to explain.

Until the turn of the 20th century, it was still a common medical practice to treat disease by ‘bleeding’ the victim. If science had turned to the Scriptures for guidance, they’d have discovered that the Hebrews have known for more than three thousand years that “the life of the flesh is in the blood” [Lev 17:11].

Secular science is the Holy Writ of secular humanism — a religion dedicated to proving man is god.

The Apostle Paul explained secular humanism this way: Because that, when they knew God, they glorified him not as God, neither were thankful; but became vain in their imaginations, and their foolish heart was darkened. Professing themselves to be wise, they became fools…Who changed the truth of God into a lie, and worshipped and served the creature more than the Creator.” [Romans 1:20-21,25].

The Bible is a Book of science, inspired, not by a ‘dark energy’ but by the Creator of the Universe. He is Eternal, not the universe itself. It is that sense of the Eternal that science is detecting. That explains the sense of desperation in coming up with a secular explanation.

God is science, since He is the author of natural law. Which is why Paul was careful to admonish Timothy when he sent him out to begin his ministry, “Perverse disputings of men of corrupt minds, and destitute of the truth, supposing that gain is godliness: from such withdraw thyself.” [1 Tim 6:6]

On scientific prounouncemnts that contradict revelation, Paul warned, “O Timothy, keep that which is committed to thy trust, avoiding profane and vain babblings, and oppositions of science falsely so called, which some professing have erred concerning the faith.”

Science is real. The Bible is real. God is real. But the universe is not eternal. God is.

“Seeing then that all these things shall be dissolved, what manner of persons ought ye to be in all holy conversation and godliness?” [2 Peter 3:12]