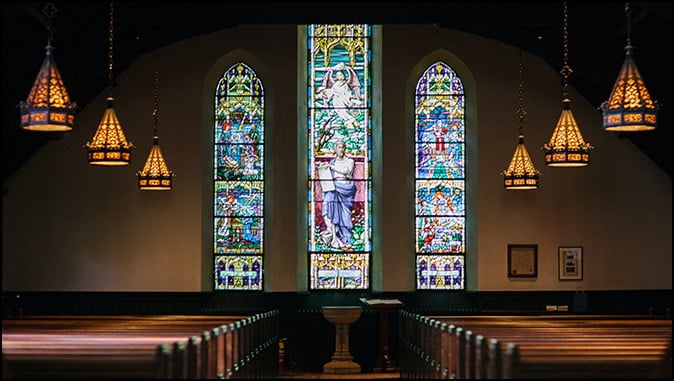 According to USAToday, a new survey of U.S. adults who don’t go to church, even on holidays, showed that 72% of the unchurched in America agree that, ”God, a higher or supreme being, actually exists”.

But the same percentage also agree with the statement, “The Church is full of hypocrites.” LifeWay Research, the research arm of the Southern Baptist Convention, based in Nashville, conducted the survey of 1,402 “unchurched” adults last spring and summer.

For the purposes of the survey, ‘unchurched’ is defined as people who have not attended services at a church, synagogue or mosque at any time in the past six months.

The survey also discovered that one in five Americans say that they never go to church — the highest percentage ever recorded by the National Opinion Research Center at the University of Chicago. (In 2004, the percentage was 17%)

The survey, it should be noted, does not differentiate between Christians and Deists, that is to say, the criteria was simply a belief in a monotheistic Supreme Being.

For example, among the participants, only 52% agreed with the statement that “Jesus died and came back to life.”

And 61% say the God of the Bible is “no different from the gods or spiritual beings depicted by world religions such as Islam, Hinduism, Buddhism, etc..

Given that Buddhism doesn’t have a god of any description and that Hinduism has literally millions of ’em, it is safe to assume that only a tiny minority of the ‘unchurched’ in this survey are actually born-again Christians.

The USAToday article also included its own reader’s poll:

“There exists only one God, the God described in the Bible.”
Strongly agree: 51%. Strongly disagree: 37%.

“Christians get on my nerves.”
Strongly agree: 39% Strongly disagree: 25%

“Non-churchgoers lean to a generic god that fits into every imaginable religious system, even when (systems) contradict one another.”

“If you went back 100 years in North America, there would have been a consensus that God is the God in the Bible. We can’t assume this any longer.”

What this means, according to Stetzer, is,

“We no longer have a home-field advantage as Christians in this culture.”

What it underscores is the apostatic state of mainstream Christian religion in America.

This is a lot to take in — especially since the OL is specifically designed to meet the needs of unchurched Christians.

For that reason, I suspect that these survey results don’t come as a complete surprise to at least some of our fellowship — but it is somewhat disturbing to see it laid out in print.

There are probably as many reasons for the ‘unchurched’ as there are unchurched Christians.

More than a few of us might find some level of agreement with the statement that “Christians get on my nerves,” although most of us probably never put it in those terms, not even to ourselves.

Not ALL Christians, of course. Just the ones who get on our nerves.

(If you are among those who strongly disagree with that statement, you probably don’t watch a lot of Christian TV.)

I also suspect that some unchurched Christians don’t go to church because it makes them feel worse than staying home does.

You spend your whole week working on your relationship with the Lord, only to go to church on Sunday and find out [again] that you’re not doing it right.

You learn all about what not to do, but precious little about what you should be doing.

Or you discover that salvation is a free gift of grace through faith, but now that you are saved, you are suddenly expected to start earning it.

For a free gift, it seems to have a lot of strings attached.

Then there is the issue of guilt. Although God has delivered everybody else at church from their bad habits, yours still stubbornly stick with you. What’s your problem?

Instead of spending an hour in uplifting fellowship with other Christians, you’re focused on making sure that nobody sees the nicotine stains on your fingers.

(And prepared, in case somebody asks, to make excuses.)

All the rest of the time, you are confident in your relationship with the Lord. Except on Sunday.

The purpose of the Biblical church model is to encourage believers in their walk of faith and empower them to carry the message to the lost.

The fact that there are so many unchurched is evidence that element is missing from most mainstream church organizations — not that fewer people believe in God.

Scott McConnell, associate director of LifeWay Research, noted that 78% of the unchurched in the survey would “be willing to listen” to someone tell “what he or she believed about Christianity.”

And 89% say they have at least one close friend who is a Christian.

“What surprised me is the openness of the hard-core unchurched to the message of God and Christianity — just not as expressed in church,” director Ed Stetzer says.

“It’s a personal thing, not an institutional thing. It’s a matter of starting conversations.”

(Like being prepared with the answer to the question, “What’s this world coming to?”)

I believe that the decline of the American church as an institution doesn’t necessarily translate into the demise of American Christianity.

It is instead a mile-marker along the way to its ultimate fulfillment — with the return of its Founder on the last day.

“Let no man deceive you by any means: for that day shall not come, except there come a falling away first, and that man of sin be revealed, the son of perdition.” (2nd Thessalonians 2:3)

There is a progression here. First comes the falling away, and then, the revelation of the man of sin. The ‘falling away’ here comes from the Greek apostasia from which we get our word ‘apostasy.’

Apostasy means a “desertion of or a departure from one’s faith.” The ‘unchurched’, according to this survey, haven’t fallen away from their faith — its more the other way around.

As McConnell noted, 78% of the unchurched are hungry for the Word, but they don’t believe that is what they get from attending church. So they don’t go.

The majority believes in God, but they don’t know Christ. (But the survey says that they’d like to.)

The torch has been passed from organized religion back into the hands of the church of called out ones. There has never been an opportunity for one-on-one Christian evangelism like there is today.

The fields are truly white with the harvest, as the Lord said they would be. I’ve said it before, but it is worth repeating.

Every person you meet has an eternal destiny. Either they will spend eternity in the presence of Christ, in eternal peace and joy, or they will spend an eternity apart from Christ, alone and nameless, sharing the in the Lake of Fire prepared for the devil and his angels.

Where they spend eternity may depend on you.

The Omega Letter exists for the purpose of ministering to the called-out ones of the last days, to equip them and prepare them for their individual battles against the prince and power of the air.

I earnestly solicit your prayers that we will be successful in our mission in the coming year. And together, may we bring many souls to Christ, in the time remaining before He comes.

The Bleach in the Aquarium

God’s Word On It

The Enemy By Jack Kinsella According to the International Standard Bible Encyclopedia, the Hebrew word…

Eliminating Heterosexism By Jack Kinsella “The word, “phobia” is defined as an anxiety disorder characterized…