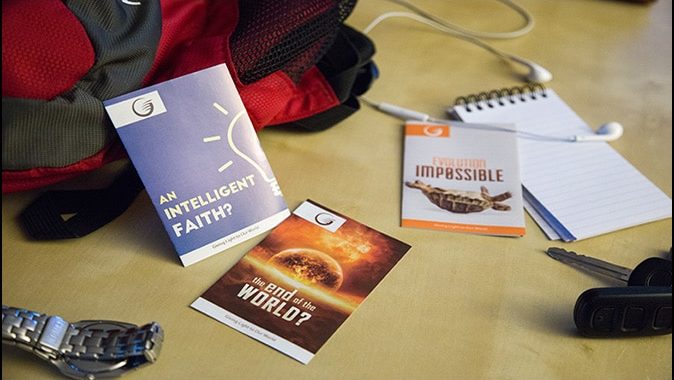 There Shall Come Scoffers
By Jack Kinsella

Last week, I watched a segment on a Fox News program that featured guests discussing Bible prophecy and the end of the world. One of the featured guests was a Roman Catholic priest and the other the head of a midwestern Baptist seminary.

It was an interesting, albeit short, discussion that opened with the priest noting that people have ‘been predicting the end of the world for centuries,’ a position that was immediately echoed by the Baptist guest.

“Knowing this first, that there shall come in the last days scoffers, walking after their own lusts, And saying, Where is the promise of his coming? for since the fathers fell asleep, all things continue as they were from the beginning of the creation.”

But the fact is, they are right. History is replete with folks who have made various predictions about when the Lord is coming back. And obviously, they were wrong, since here we are.

In the mid-2nd century, a new convert named Montanus claimed to have received special revelations from God that Christ had returned and set up the New Jerusalem in the town of Pepuza in Phrygia.

Montanus set up his own religion, called ‘Montanism’ that gave credence to ecstactic prophesy and speaking in tongues as both evidence of salvation and proof of the indwelling of the Holy Spirit.

Montanus taught that Christians who fell from grace could not be redeemed, which was in contrast with the orthodox Christian teachings of that period. The prophets of Montanism did not speak as messengers of God: “Thus saith the Lord,” but rather described themselves as possessed by God, and spoke as God.

“I am the Father, the Word, and the Paraclete,” said Montanus, as recorded by Didymus in his work, ‘De Trinitate’. The early Church Father Iraenius denounced Montanism in his work, ‘Against Heresies’ in the third century.

The heretical work, “the Secret Gospel of Thomas” (upon which the ‘Davinci Codes’ are loosely based) emerged from Montanism, and, 19 centuries later, it is still with us, as are literal volumes of historical false prophecies of Christ’s return.

The ‘scoffers’ seem to have a point. Catholic scholar, Arnald of Villanova predicted that the Antichrist would appear in 1378. In the 15th century, a group called the Taborites predicted the return of Christ and the destruction of all the world’s cities by fire.

A hundred years later, Melchior Hoffman predicted Jesus would return in 1533 and set up his kingdom in Strasbourg.

A Lutheran clergyman named Adam Nachenmoser predicted the Lord would return in 1635. Another movement sprang up about this time that taught the date of the Lord’s return would be 1666.

Among the most famous false prophets of the return of Christ is William Miller, who, basing his conclusions on his study of the Book of Daniel, predicted the Lord would return sometime between March 21, 1843 and March 21, 1844.

Miller called his prophecy the beginning of “The Great Awakening.” He later revised his prediction to October 22, 1844. Miller and his followers put on their ‘Rapture suits’ and went to the top of a mountain, prayed, fasted and waited.

When Jesus did not appear, Miller’s followers experienced what came to be called “the Great Disappointment”. Most of the thousands of followers left the movement.

A few, however, went back to their Bibles to find out why they had been disappointed. A group of the remaining followers concluded that the prophecy predicted not that Jesus would return to earth in 1844, but that investigative judgement in heaven would begin in that year.

Miller recorded his personal disappointment in his memoirs: “Were I to live my life over again, with the same evidence that I then had, to be honest with God and man, I should have to do as I have done. I confess my error, and acknowledge my disappointment.”

Miller’s failed prophecies inspired new prophets to come forward with their own, revised and update calculations. The most prolific among them was Charles Taze Russell. Picking up where Miller left off, Russell’s followers, at first known as ‘Russellites’ (catchy names, eh?) believed that they had discovered ‘significant errors’ in orthodox Christian teachings.

Russell taught that the Rapture would occur in April, 1878. In 1877, Russell published his teachings under the title, “The Object and Manner of our Lord’s Return.”

Russell’s movement was renamed ” the Watchtower Bible and Tract Society ” or “Jehovah’s Witnesses.” It was taken over after Russell’s death by Joseph Rutherford, who added 1918 and 1920 to the list of dates for Christ’s return and declared the Millennium began in 1925.

In 1974, David Berg set up his own cult, called “The Family” or “Children of God”, predicting the end of the world would coincide with the appearance of the comet Kohoutek, later revising it to place the Tribulation at the beginning of 1989 and the return of Christ for 1993.

Edgar Whisenant predicted Christ’s return between September 11 and September 13, 1988, in his aptly titled, “88 Reasons Why the Rapture is in 1988”. Whisnant based his predictions on the timing of the Jewish Feast of the Trumpets. (Rosh Hashana)

In 1989, Benny Hinn predicted that a ‘short man’ would appear within ‘a few’ years and assume the mantle of the antichrist. (Hinn also predicted Castro’s death by 1999, the election of a female US president who would ‘destroy America’ and the destruction of the East Coast by earthquakes in 1999.)

Is it any wonder that the world is inundated with ‘scoffers?’ Most of these predictions, together with their prognosticators, were made by sincere and dedicated scholars who believed that they had ‘cracked’ some Biblical secret code that had been there all along, but that nobody else except them had discovered.

Their followers were equally sincere and dedicated believers in their prophecies, but they misplaced their faith. Our faith is not to be, as the Scripture says, rooted in WHEN He comes, but rather, in Who is coming.

It means exactly what it says. No man can calculate the day or the hour because of the damage such false prophecies do to believers when they fail.

Look at the damage already caused by those sincere, well-meaning believers among the false prophets listed above. While some of them were undoubtedly well-meaning, the result has been the loss of uncounted souls for Christ.

Do you doubt me? Have you ever attempted to present evidence of Christ’s return in the hope that the evidence will cause somebody to accept the conclusion that God MUST be real and therefore the Bible MUST be true? And, having reached that conclusion, your prospect will recognize his lost condition and trust Jesus?

How MANY times have you then heard someone echo the sentiments expressed in 2nd Peter 3:3? “People have been predicting the end of the world for centuries, but we’re still here.” It is a fulfillment of prophecy, but it is also evidence of the incalculable damage centuries of false prophecy has been responsible for.

It’s been said before, and it didn’t happen. What makes this any different?

While no generation in the history of the Church Age has at its disposal more conclusive evidence of the fulfillment of end times prophecy, including the restoration of nations, the alignment of nations in precisely the configuration described by the prophets, the explosion of knowledge, the shifting weather patterns, the restoration of Israel, etc., this evidence is useless as a tool of evangelism if nobody can get past the ‘been there, done that’ part in order to present it.

Every failed prediction of the Rapture or the return of Christ takes its toll. If just one person is turned off to the promise of salvation as a result of the litany of failed prognosticators of the past — all of whom were in violation of the clear teachings of the Scriptures — the loss of that person’s soul is an incalculable tragedy, from Heaven’s perspective.

The joy Jesus spoke of in heaven when a sinner turns to Christ goes uncelebrated, replaced by the mourning of the angels.

The simple facts are these. No other generation has been blessed with such a preponderance of evidence. No generation in history has ever had so many reasons to accept the predictive nature of Scripture — and thus, evidence of the Divinity of its Author, than does the generation that witnessed the rebirth of Israel and the unfolding scenario predicted thousands of years ago by the Hebrew prophets.

But if the evidence doesn’t get a hearing, it is of no value.

“For what man knoweth the things of a man, save the spirit of man which is in him? even so the things of God knoweth no man, but the Spirit of God,” writes the Apostle Paul. (1st Corinthians 2:11)

Attempting to divine by human means that which God has deliberately drawn a curtain around is an act of defiance that bears eternal and far-reaching consequences that no man will ever understand this side of heaven. But if we trust Jesus, then we must trust EVERYTHING He taught us.

Discussing His return, Jesus used an analogy that clearly explains the purpose of a secret, incalculable Rapture.

“And this know, that if the goodman of the house had known what hour the thief would come, he would have watched, and not have suffered his house to be broken through. Be ye therefore ready also: for the Son of man cometh at an hour WHEN YE THINK NOT.” (Luke 12:39-40)

As events unfold that fill out the prophetic puzzle for this generation, it is abundantly obvious that the Lord must soon return for His Church.

But as to ‘when’ — ‘no man knoweth the day or the hour.’ The litany of failed attempts has provided much-needed ammunition to the enemy and done the Kingdom a grave disservice. And given the scoffers all the reasons they need to walk away, comfortable in their unbelief.

It is a spiritual tragedy.

Is Hell a Literal Place?

Is Hell a Literal Place? By Jack Kinsella I received an email from a reader…

When Is Too Late Too Late?

When Is Too Late Too Late? By Jack Kinsella For my birthday, one of my…

Unrepentant Christianity? By Jack Kinsella There was a post in our member’s forums under the…

An Evil Under the Sun