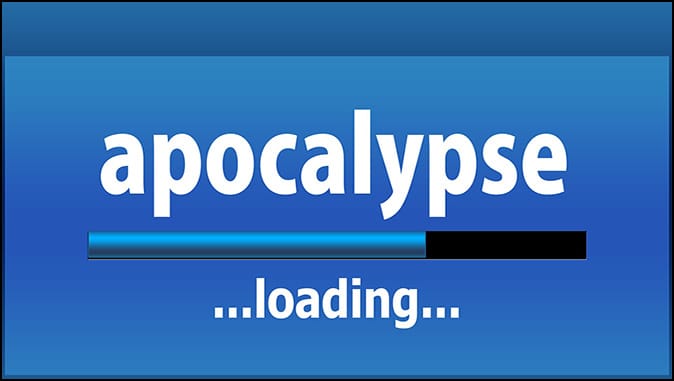 The Tribulation Controversy
By Jack Kinsella

I wish I had a dollar for every time somebody has trotted out a private theory and then demanded I prove them wrong. Some of them are nice about it, most aren’t. I am always surprised by the question, even though I’ve heard it many times in recent years.

In 1990, a formerly pre-Trib preacher named Marv Rosenthal wrote a book called “The Pre-Wrath Rapture of the Church.” Rosenthal’s theory was influenced by Robert Van Kampen, who originally developed the concept in his book, “The Rapture Question Answered.”

I read Rosenthal’s book thoroughly in preparation for “This Week In Bible Prophecy” interview I conducted with him in Tampa in February, 1992.

My Mom taught me to always find something good you can say about somebody. Marv was a really nice man in person. But he wasn’t any more convincing in our conversations — both on and off-camera — than he was in his book.

Beware anybody who comes up with a brand-new interpretation of Scripture and then pronounces it a “true” Scriptural study, implying that all previous studies are false. Pre-Wrath has been around since Robert Van Kampen and Marv Rosenthal — about twenty years.

I am therefore fascinated by the arrogance of its proponents when it comes to advancing their theory, as if all other students of prophecy were either deluded or thick unless they accept their superior understanding of the Scripture.

That superior understanding of the Scripture has some believing we’re now in the Tribulation, others believing they can identify the antichrist, has others preparing doomsday bunkers in which to ride out the judgments of God and has spawned a whole cottage industry catering to the new Christian survivalist.

Essentially, pre-Wrath abandons the purpose for the Tribulation and focuses its attention on the manner in which the judgments of God are poured out.

The Pre-Wrath view zeros in on the mid-point when the antichrist’s covenant is broken as the beginning of the outpouring of the Wrath of God.

The Church is raptured at the Blood Moon as the Six Seal is opened. This differs from the mid-Tribulation view in that the Pre-Wrath Rapture is linked to the sixth seal, rather than to the mid-Trib’s exact 1260-day halfway-point.

Linking the Rapture to either the 1260 day mid-point OR to one of the seal judgments also requires demolishing the doctrine of imminency.

If the Rapture is linked to either the mid-point of the Tribulation or to the Sixth Seal, then it also means dumping the prohibition on not knowing the day or the hour.

We don’t know now, but we’ll know when the covenant is confirmed. My mail box is filled with calculations dating the Rapture as 1260 days from the implementing of the European Neighborhood Policy ENP that went into force January 1, 2007.

That’s a lot of doctrine to discard…just to prove a point.

I am not infallible, and neither are those who share my Dispensationalist view of a pre-Tribulation Rapture. If I am wrong, I’d like to know. I am sincere and I sincerely want to teach what I believe is the truth.

But if the pre-Wrath understanding of Scripture is correct, there is no reason for a Rapture at all. The Holy Spirit’s ministry has been removed from the earth and the Church has been left behind to face the greatest period of spiritual testing in human history alone.

Jesus’ promise that the Holy Spirit will indwell the Church until He comes for it is null and void. What purpose does the Rapture now serve? A great escape for Christians?

If it was to keep a Divine Promise that the Comforter would indwell us until He came for us, then the Rapture makes sense.

If the Rapture is simply to provide Christians with a Great Escape then it would seem that God owes an apology to the Christians who faced the Roman lions.

Why is there a Tribulation in the first place? If it has a purpose, then what is it?

“Seventy weeks are determined upon thy people and upon thy holy city, to finish the transgression, and to make an end of sins, and to make reconciliation for iniquity, and to bring in everlasting righteousness, and to seal up the vision and prophecy, and to anoint the most Holy.” (Daniel 9:24)

This verse makes five points relative to Israel’s future. The first is the seventy ‘weeks’. The word ‘week’ comes from the Hebrew word ‘shabua’ which is used to denote seven year periods the way a ‘decade’ was used by the Greeks to denote periods of ten years.

The first sixty-nine weeks of years were fulfilled with the Crucifixion of the Messiah in Jerusalem.

But the angel said the 70 weeks were determined upon DANIEL’S people, and DANIEL’s ‘holy city’ (Jerusalem) so the final, unfulfilled 70th week is for the Jews and not the Church. It is to ‘finish the transgression’.

Revelation 1:7 says, “Behold, He cometh with clouds; and every eye shall see Him, and they also which pierced him: and all kindreds of the earth shall wail because of Him. Even so, Amen.”

The angel said the 70th Week will make ‘an end of sins, make reconciliation for iniquity’ again, accomplished at the Cross for the Church, but a future event from the perspective of Israel.

Romans 9:27: “Esaias also crieth concerning Israel, Though the number of the children of Israel be as the sand of the sea, a remnant shall be saved:”

Romans 11:26: “And so all Israel shall be saved: as it is written, There shall come out of Sion the Deliverer, and shall turn away ungodliness from Jacob:”

Jeremiah 30:7 “Alas! for that day is great, so that none is like it: it is even the time of Jacob’s trouble, but he shall be saved out of it.”

The Tribulation Period is in part for the Jews (“time of Jacob’s trouble”) from the PERSPECTIVE of how the Jews fit into God’s redemptive plan.

Israel’s four hundred and ninety year future history stopped at Year 483 when the Messiah was ‘cut off.’ The clock starts ticking again when the antichrist confirms the covenant referenced in Daniel 9:27.

The ultimate purpose of Daniel’s 70th Week is to bring about the national reconciliation and redemption of Israel.

A secondary purpose of the Tribulation Period is to pour out God’s judgment upon a Christ-rejecting world. “Neither repented they of their murders, nor of their sorceries, nor of their fornication, nor of their thefts.” (Revelation 9:21)

So here’s the insurmountable problem with the pre-Wrath view as I understand it. The Church plays no role in the Tribulation period. Not any of it.

It is ALL the Wrath of God — the whole Tribulation Period. It is poured out on a Christ-rejecting world as judgment for rejecting Christ.

Since the Church by definition has not rejected Christ, it does not qualify for even the first seal judgment against those to whom it is intended.

That requires changing the nature of God; it demands making a case for God judging the innocent along with the guilty. I just can’t get there from here.

The first seal judgment is the antichrist, and Paul says that the antichrist won’t be revealed until AFTER “He Who letteth is taken out of the way” (2nd Thessalonians 2:7)

That is why Paul taught the doctrine of the Rapture of the Church in 1 Thessalonians 5. “For God hath not appointed us to wrath, but to obtain salvation by our Lord Jesus Christ” (1 Thessalonians 5:9)

“And to wait for His Son from heaven, whom he raised from the dead, even Jesus, which delivered us from the wrath to come.” (1 Thessalonians 1:10)

“Much more then, being now justified by His blood, we shall be saved from wrath through Him.” (Romans 5:9)

The clear distinction drawn between the Church Age and the final, unfulfilled ‘week’ of Daniel means the Tribulation MUST be a literal seven year period. Daniel gives its length as 2,520 literal days.

“And I will pray the Father, and He shall give you another Comforter, that He may abide with you for ever.”

Notice that the Comforter is not an ‘it’ but rather, a ‘He’ — just like the ‘He’ that will letteth until ‘He’ be taken out of the way in 2nd Thessalonians 2:7.

“Even the Spirit of truth; Whom the world cannot receive, because it seeth Him not, neither knoweth Him: but ye know Him; for He dwelleth with you, and shall be in you.”

The Comforter dwelleth in me and shall be in me, the Lord says. Is that not a promise? To whom is it addressed?

Is it not addressed to the Church, and by extension, to Jack? It is addressed to Jack, isn’t it? What am I? Chopped liver?

Paul says the Holy Spirit is ‘taken out of the way’ and “THEN shall that Wicked be revealed” (which is the same event as the breaking of the first seal in Revelation 6:2).

So the indwelling Holy Spirit is taken out of the way BEFORE the breaking of the 1st seal, but then you’ll have to go through the first five judgments against a Christ-rejecting world without Him.

Jesus promised the Church; 1) A Comforter in the Person of the Holy Spirit. 2)He will abide with me “forever”. 3) He will dwell with me and in me. 4) Jesus will not leave me Comfortless, but that He will come to me.

Which means that if I no longer have the Comforter, it’s because Jesus has me.

“But the Comforter, which is the Holy Ghost, whom the Father will send in My name, He shall teach you all things, and bring all things to your remembrance, whatsoever I have said unto you.” (John 14:26)

Including His promise not to leave me Comfortless for the first half of the Tribulation Period.