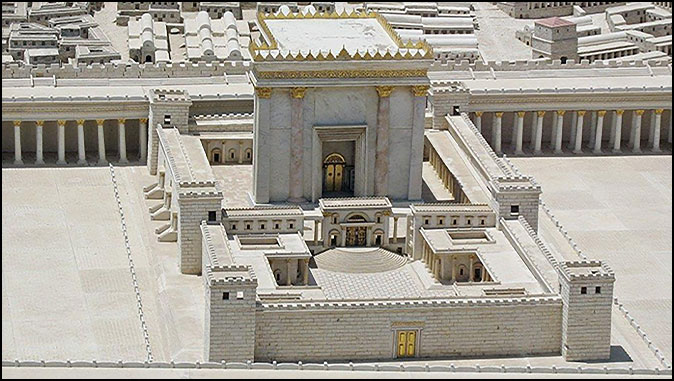 The Third Temple
By Jack Kinsella

“Who opposeth and exalteth himself above all that is called God, or that is worshipped; so that he as God sitteth in the temple of God, shewing himself that he is God.” (2nd Thessalonians 2:4)

In his 2nd Letter to the new church at Thessolonica, the Apostle Paul was addressing a specific teaching that had been corrupted by a false teaching that the Rapture had already occurred and they Thessalonians had been left behind.

“Now we beseech you, brethren, by the coming of our Lord Jesus Christ, and by our gathering together unto Him, That ye be not soon shaken in mind, or be troubled, neither by spirit, nor by word, nor by letter as from us, as that the day of Christ is at hand.”(2nd Thessalonians 2:2-3)

Note something right off the bat. The “Day of Christ” is the triumphant 2nd Coming at the conclusion of the Tribulation Period and the national redemption of Israel.

Paul refers to an event that the Thessalonians interpreted as meaning that Day ‘was at hand’ and NOT that the “Day of Christ” had come and gone. Instead, they feared they’d been left behind to go through the Tribulation.

“Our gathering together unto Him”, Paul assures the Thessalonians, is a separate event that, had it occurred, would have meant the countdown to the “Day of Christ” had started.

Moreover, Paul assures the confused Thessalonians, “Let no man deceive you by any means: for that Day shall not come, except there come a falling away first, and that man of sin be revealed, the son of perdition; Who opposeth and exalteth himself above all that is called God, or that is worshipped; so that he as God sitteth in the temple of God, shewing himself that he is God.” (2nd Thessalonians 2:3-4)

The religious Jews of modern Israel believe the restoration of Israel to the land is evidence of the coming of the Jewish Messiah, and have been planning for a 3rd Temple to resume the Temple worship system since the British recaptured Jerusalem from the Ottoman Empire in 1917.

Writing in the London Sunday Illustrated Herald, the British official eventually responsible for redrawing the maps of the Middle East and carving the Balfour Declaration Mandate in half observed, “It would almost seem as if the gospel of Christ and the gospel of Antichrist were destined to originate from the same people.” Winston Churchill, February 8, 1920.

That may sound antisemitic, but only if one fails to understand the Gospel of Jesus Christ.

While the Jews are not responsible for the death of the Messiah, they did reject Him. They didn’t recognize Who He was, by Divine Plan. That isn’t a condemnation of the Jews, it is a recorded fact of history.

“He came unto His own, and His own received Him not; But as many as received Him, to them gave He power to become the sons of God, even to them that believe on His Name:” (John 1:11)

Jesus Himself confirmed that the antichrist will be received as the Messiah by Israel during the early part of the Tribulation:

“I am come in my Father’s Name, and ye receive Me not: if another shall come in his own name, him ye will receive.” (John 5:42)

Speaking of the salvation of the Cross, the Apostle Paul explains; “What then? Israel hath not obtained that which he seeketh for; but the election hath obtained it, and the rest were blinded. (According as it is written, God hath given them the spirit of slumber, eyes that they should not see, and ears that they should not hear;) unto this day.” (Romans 11:7-8)

Paul explains further that; “For I would not, brethren, that ye should be ignorant of this mystery, lest ye should be wise in your own conceits; that blindness in part is happened to Israel, until the fulness of the Gentiles be come in.” (Romans 11:25)

In that single verse, Paul forever dashes any justification for antisemitism, instead, revealing the enormous debt the Church owes the Jews. Apart from any Divine judgment against Israel for past sins, the “blindness, in part, is happened to Israel” so that we, the Gentiles, could be saved.

That being said, there is something else important to note about the Third Temple of 2nd Thessalonians 2:4: Many Christians teach that the Third Temple is the Temple of the Antichrist — it is even so nicknamed. But Paul says — note this well — the antichrist takes his seat “in the temple of God”.

This is another evidence that the Church Age concludes at the Rapture, and that the Rapture takes place before the beginning of the Tribulation Period. The Tribulation is also called “The time of Jacob’s Trouble” (Jeremiah 30:7) or the 70th Week of Daniel. (Daniel 9:24)

The Tribulation Period is the final week of the Age of the Law, which was cut short at the Cross. (Daniel 9:26)

Also, when examining Daniel’s Seventy Weeks, look at God’s sixfold purpose to be accomplished at their conclusion:

1) to finish the transgression,

3) to make reconciliation for iniquity,

4) to bring in everlasting righteousness,

5) to seal up the vision and prophecy, and,

6) to anoint the most Holy.

For Christians, this was accomplished at the Cross. But national Israel will be saved, Paul tells us. “And so all Israel shall be saved: as it is written, There shall come out of Sion the Deliverer, and shall turn away ungodliness from Jacob.” (Romans 11:26)

While some Jews were saved in the 1st century, and some in each century since, Paul says that in God’s Divine Plan, “ALL Israel shall be saved.” There is no misinterpreting the word ‘all’.

Because, as Paul told the Thessalonians, “we have not yet been gathered unto Him” so the Day of Israel’s national redemption, the “Day of Christ” (see Zechariah 12:10) is not “yet at hand”.

Why is all this important to the Third Temple? Because the Third Temple is ritually legitimate during the Tribulation. According to the Temple Mount Institute, Temple worship could be resumed today, if they could rebuild the Temple itself.

According to director Chaim Richman, (who told me this personally in 1992), they know where the Ark of the Covenant is located in a secret chamber inside the Temple Mount. The Temple Mount Institute makes a similar claim on its website.

A rabbinical school (or yeshiva) for the training of the priests for this temple is presently in existence in the Old City. To ensure ritual purity, its students live on elevated platforms and are not permitted to touch Israeli soil until the Temple area can be ritually cleansed.

Sacred vessels and priestly garments have been prepared. Cedar from Lebanon captured in the north during the war there in 1982 has been placed in storage for the next temple, and so on.

Thus there has been considerable preparation for the Third Temple by the religious Jews of modern Jerusalem. Both the Askenazi and Sephardic Chief Rabbis of Jerusalem agree that such a temple will be built as soon as circumstances permit.

It would not be necessary for the entire Temple to be rebuilt before the restoration of the Jewish system of Temple worship and animal sacrifice. (David’s first temple was a tent to house the Ark of the Covenant).

But the worship and sacrifice MUST be performed on a ritually cleansed Temple Mount. The only problem is the al-Aqsa mosque that currently occupies that spot.

Illegal construction underneath the Temple Mount by the Muslim Waqf (who control the Temple Mount and the Dome of the Rock) is causing the ancient retaining wall that holds it up to crumble.

Using forbidden heavy earth-moving equipment, they are now excavating a northerly channel on the Temple Plaza heading in the direction of the Dome of the Rock. Breaking into the bedrock in this area, archeologists warn, would also harm the gold-topped Dome, which sits on that rock.

A collapse of the Dome would rally the entire Arab world to his cause, particularly after the PA blames Israeli sabotage for its destruction.

There is absolutely no reason to doubt that, in the event of any such war, Israel will recapture the Temple Mount. And there is no reason to believe they will ever surrender it again.

According to the Mitzvot, it is the obligation of every generation of Jews to rebuild their holy Temple on Temple Mount. Flush with the victories of 1967, the Israeli government surrendered the Temple Mount to Arab control to forestall the inevitable UN demands that Israel surrender ALL the territory it captured.

Over the last decade, Israel’s exchange has proved futile, as the Arabs have managed to reclaim almost all the land Israel gave up sovereignty over the Temple Mount to keep.

The Israelis are unlikely to ever surrender it again.

“If I forget thee, O Jerusalem, let my right hand forget her cunning. If I do not remember thee, let my tongue cleave to the roof of my mouth; if I prefer not Jerusalem above my chief joy.” Psalms 137:5-6)