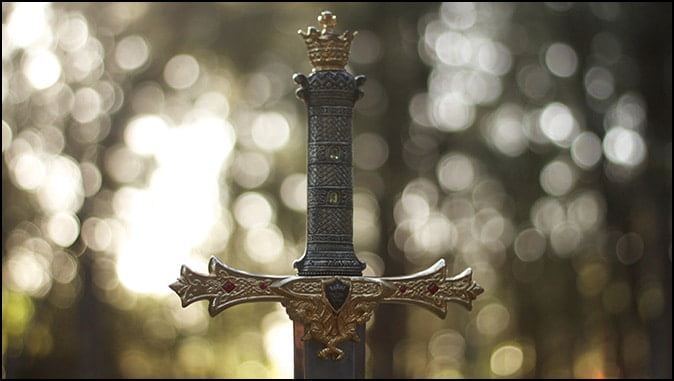 The Sword of the Lord
By Jack Kinsella

There is a continuing controversy concerning the so-called ‘Jesus Rifles’ manufactured by Trijicon, a defense contractor located in Michigan.

Trijicon doesn’t actually manufacture rifles, it manufactures rifle sights. The company’s founder was a born-again Christian who was killed in a 2005 plane crash in South Africa.

Before his death, it had been his order that all of the rifle sights manufactured for the US military would have a Scripture verse appended to it’s serial number.

The company, which had been putting Scripture references on its products for two decades, continued the practice after his death in honor of his memory.

One of the citations on the gun sights, 2COR4:6, is a reference to 2nd Corinthians 4:6 which reads:

“For God, who commanded the light to shine out of darkness, hath shined in our hearts, to give the light of the knowledge of the glory of God in the face of Jesus Christ.”

Other references include citations from the books of Revelation, Matthew and John dealing with Jesus as “the light of the world.”

“Whoever follows me will never walk in darkness, but will have the light of life.”

Evidently fearing the power of those words, somebody pointed out the offending practice to the media and the watchdog groups were suddenly all over it.

Initially, the Pentagon had no problem with it.

“The perfect parallel that I see,” said Maj. John Redfield, spokesperson for CentCom, told ABC News, “is between the statement that’s on the back of our dollar bills, which is ‘In God We Trust,’ and we haven’t moved away from that.”

Said Redfield, “Unless the equipment that’s being used that has these inscriptions proved to be less than effective for soldiers, sailors, airmen, Marines and military folks using it, I wouldn’t see why we would stop using that.”

But Mikey Weinstein of the deceptively-named Military Religious Freedom Foundation together other groups dedicated to stamping out Christianity in the name of religious freedom, insisted that Bible verses on gunsights violated the Constitution.

Weinstein, an attorney and former Air Force officer, said many members of his group who currently serve in the military have complained about the markings on the sights.

He also claims they’ve told him that commanders have referred to weapons with the sights as “spiritually transformed firearm[s] of Jesus Christ.”

Once the story got out, it became an international scandal. Canadian forces in Afghanistan using weapons equipped with the gunsights had already begun removing the inscriptions when the Pentagon suddenly reversed itself and insisted Trijicon do something.

Trijicon folded like a lawn chair and began manufacturing kits to remove the inscriptions from the gunsights and have already started shipping them.

There are two ways of looking at the argument. The first is that allegedly expressed by the unnamed commanders in Mikey Weinstein’s story that weapons equipped with the sights are “spiritually transformed weapons of Jesus Christ.”

No Christian would believe that — Bible verses aren’t magic incantations and inanimate objects have no spirits to transform.

But it sounds believeable enough to non-Christians, which is why Weinstein most probably made the story up. True or not, the story captured the imagination of the media.

The NYTimes felt a duty to inform al-Qaeda that the markings meant they were being shot at by “Jesus rifles.”

The idea caught on and soon the Western media was objecting that the inscriptions played into the hands of those who call the wars in Afghanistan and Iraq a ‘Crusade”.

Evidently, we can invade their countries. We can occupy their cities. We can attack and kill the Islamic jihadists we find there.

But we don’t want to make them mad at us by reminding them of why they declared war on us to begin with. To impose their religion on the West.

The other way of looking at it is the one expressed by Major Redfield, that the inscriptions are no different than the inscription, “In God We Trust.”

Which makes perfect sense, which is why the military not only ordered the inscriptions scrubbed, but probably found Major Redfield a new assignment while he waits for his retirement papers to come through.

This isn’t about the benefit of putting Bible verses on rifle scopes. Most of the men who used them probably didn’t notice. After all, they’ve been inscribed on every gunsight manufactured in the past twenty years.

It wasn’t until the tyranical minority discovered they were there that they began demanding their rights to be free from any religious influences by denying others their right to freedom of religion.

The overwhelming majority of the US military are Christian and most of them are of the born-again, Blood-bought variety.

(As evidence, let me again remind you the inscriptions have been there for two decades without a word of complaint. Until now.)

What is worth noting from this story is the horrified reaction of the public to the idea that we might offend the people we are shooting.

Does anyone recall why we are shooting at them in the first place? Because if we don’t shoot them, they will continue in their efforts to kill Americans and destroy Western culture.

About eighty-seven percent of Americans are Christians. One hundred percent of our jihadist enemies are Muslim. The jihadists want to wipe out Christianity and Judaism.

That is the only reason for the conflict.

About ten percent of Americans are atheist or agnostic, with all the other religions, including Islam, making up the remaining three percent of the non-Christian population.

When asked, former Army Major General William Nash told ABC News that he personally had “no problem” with organizations providing Bibles and other religious tracts to U.S. troops.

“But I do have a problem,” said Nash, “with military equipment being labeled in a way where it seems like it’s our God against their god,” he said.

Which is exactly the reason that this will continue to be a ‘generational war’. Because we insist on sending our forces into battle against their god unarmed.

I don’t believe that Scripture verses on gunsights give rifles magical powers. But they do remind us that what we are fighting for is the right to our own God. That is what the enemy is fighting to take from us. The right to worship our God, rather than theirs.

It IS their god against ours, whether we want to frame it that way or not. And their side’s god will keep on winning — as long as our side remains ashamed of ours.

“For the Word of God is quick, and powerful, and sharper than any twoedged sword, piercing even to the dividing asunder of soul and spirit, and of the joints and marrow, and is a discerner of the thoughts and intents of the heart.” (Hebrews 4:12)

This is as much a spiritual war as it is a flesh-and-blood war. It would be a lot easier to win if our forces were permitted to carry the Sword of the Lord with them.

Believing in Nothing, Falling For Anything

Believing in Nothing, Falling For Anything By Jack Kinsella The Freedom From Religion Foundation is…

The Gospel According to Job

That Old Black Magic By Jack Kinsella You can’t get a date. You’ve developed a…

Why A ‘Tribulation’? By Jack Kinsella What is the purpose of the Tribulation period? That…