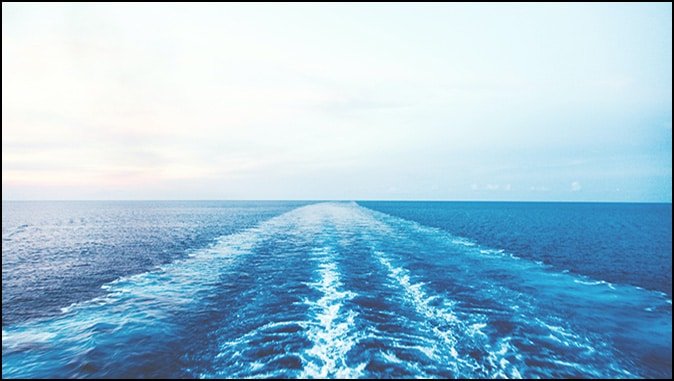 The Safety of the Sea
By Jack Kinsella

There is something about a boat that makes me feel safe. I can’t quite put my finger on what it is, because at fifty miles out to sea in 100 fathoms of water, the boat is the only thing keeping you from becoming an hors de ouvres for sharks.

(There is also something about a boat that makes canned corn beef sandwiches and warm soda taste like a gourmet meal. You don’t even think about the fish guts all over your hands.)

We boarded ‘The Scarlet Lady’ at 2:58 AM, carrying our gear and wondering what in the world we were doing getting up in the middle of the night to take the four-hour trip out to the middle of nowhere so that we could work all day to catch something we could have bought across the street at the fish market for less money than we had invested in the food we brought with us for the day.

That is the sort of thing one wonders until one is fully awake. Then the madness sets in and such thoughts are banished as heretical; real men don’t buy fish — that’s what tourists do.

We were well out to sea before the sun came up — I got a beautiful picture of the sunrise coming up over the ocean’s horizon and all was right with the world.

These pictures posted below are not the ones Jack is speaking of but they are similar. They were taken in NC by his beloved wife Gayle, most likely while Dad was off catching dinna!

We had a disappointing morning; we trolled for six hours without getting a single strike — but we had the consolation of knowing it wasn’t our fault.

The CB crackled all morning with other boat captains complaining that they were doing no better than we. By noon, most of them had called it a day and headed back to port.

The swells that morning were enormous — they looked like mountains of water. I asked our intrepid Captain, Rick, how high he estimated the swells were. “Three feet,” he grunted, as a huge swell caused a nearby fishing boat to completely disappear between the waves.

An even larger swell lifted us up a few minutes later. I asked Rick how high he thought that one was. He thought for a second, and said, “Four feet. Now leave me alone.” (Fishermen get really cranky when the fish aren’t biting, I noticed.)

We decided to change tactics and do some bottom-fishing. Personally, I prefer to troll for a strike. The fish are usually bigger and they are easier to get on the hook. The fish strikes the bait, the movement of the boat sets the hook, and they only thing left for you to do is fight the fish.

Bottom fishing is usually done in about 20 fathoms (about 120 feet), dropping the bait to the bottom and raising it up about two feet.

Thirty seconds after dropping the line, if you don’t have a fish on there, it means you don’t have any bait left, either. And bottom fishing is nowhere nearly as selective as trolling for tuna. Pretty much anything that will strike a trolling lure is worth the fight it puts up.

Bottom fishing means every other fish is either a shark or a manta ray or a moray eel. A shark will fight as hard as a tuna, but there isn’t much satisfaction in seeing one swim up to the boat. It usually means cutting the line and losing your tackle.

A manta ray is even tougher to drag up to the surface and even less fun to see on the end of your line — it’s like discovering you have the winning numbers on the lottery and then finding out you were checking last week’s ticket.

Bottom fishing is hard work. Every strike means setting a hook 120 feet down — you have to hit it pretty hard to set it, and, if you come up empty, you have to reel the whole mess back up from the bottom, re-bait, and send it back down to do it all over again.

But we didn’t come home empty-handed; between us, we filled the fish cooler with vermillion snapper (locally known as ‘beeliners’), grouper, sea bass and weird-looking little guys called ‘french grunts’.

By dusk, we had enough — we’d been at sea for some fifteen hours and I had a whole new series of bruises and bumps from trying to stand and fish a boat that was rocking from side to side all day.

There were four of us; Captain Rick, Wayne, a full-blooded Indian chief (literally) who runs one of Rick’s manufacturing plants and Curtis, one of Rick’s employees.

I liked Curtis immediately — he is one of those guys who can’t seem to do enough for you. Wayne was our resident expert, virtually having grown up on commercial fishing boats.

None of them seemed to notice that I was bouncing around the cabin like a pinball in an arcade. (Except once when I overheard Wayne say to Rick as I took a particularly nasty spill; “Man, that’s gonna leave a bruise!”)

As we were headed back, I decided to stretch out over the engine cover, put my hat over my face, and dwell a bit on what it is about a boat that makes me feel so safe.

At sea, there is only God.

On land, going about our daily business, we trust God for our eternity, but most of us prefer to take command of the ‘here and now’ ourselves.

A situation comes up and we handle it. Sometimes, we don’t even bother God with the details; it isn’t that big a deal.

Who prays before heading out to an ATM? Who prays that when they put their card in and punch in their pin number, that the machine will kick out the requested amount of cash?

Now the kicker question: When was the last time you felt really safe?

Driving your car on the freeway means taking your life into your hands; it isn’t just the bad drivers, there are the ‘road-rage’ nuts to contend with. And you just never know who might sitting on the shoulder of the road with a high-powered rifle, randoming picking off strangers as they drive.

According to Israeli intelligence, Iran’s mad mullahs will pass the point of no return sometime next month and it will be too late to do anything to stop them.

The mullahs just completed a successful missile test in which they were able to detonate a warhead from 200 miles above the earth’s surface.

If they were to detonate a nuclear warhead from orbit 200 miles about America, the resulting EMP burst would wipe out our technological infrastructure, setting us back technologically about a hundred years.

The North Koreans are already nuclear and have hinted that they may pass nukes to terrorists unless the West plays ball according to Pyongyang’s rules.

Although we are making headway against al-Qaeda abroad, the administration’s inexplicable policy of tightening domestic security by turning a blind eye against illegal immigration means we have no idea who is inside our borders or what their mission objectives are.

At sea, there is only you, the sea, and the Lord.

“Trust in the LORD with all thine heart; and lean not unto thine own understanding. In all thy ways acknowledge Him, and He shall direct thy paths.” (Proverbs 3:5-6)

Like I said, I feel safe out there. There is a lesson in there, somewhere.