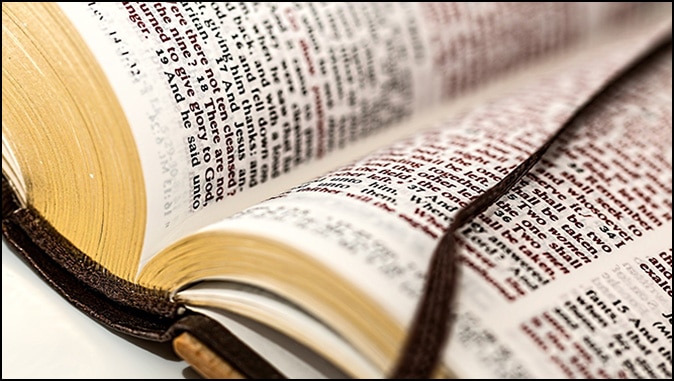 The Most Sure Word
By Jack Kinsella

“For we have not followed cunningly devised fables, when we made known unto you the power and coming of our Lord Jesus Christ, but were eyewitnesses of His majesty.” (2nd Peter 1:16)

All the world’s large religions have their sacred texts; from Islam to Buddhism to Confucianism to the various Celtic and pagan religions. But among the world’s sacred texts, the Bible stands uniquely above them all.

That is no insignificant claim; Webster’s Dictionary defines ‘unique’ as “different from all others; having no like or equal.”

Muslims, Hindus, pagans and so on find that characterization of the Scriptures offensive, but indisputable. There are books LIKE the Bible, but they aren’t ‘unique’ in the sense the Bible is, even among those who follow their teachings.

The Koran was composed from the oral teachings of Mohammed. The Book of Mormon was written by Joseph Smith. Confusicious was the author of the religion bearing his name, as was Buddha.

The Bible is made up of sixty-six separate books. They were written over a period of 1600 years, roughly a span of forty generations. The human authors of the books of the Bible came from every conceivable walk of life.

Moses was a political leader who was trained in the universities of Egypt. Peter was a simple fisherman. Amos was a herdsman, while Joshua, a military general.

Nehemiah was a cup bearer to the king of Persia and Daniel, prime minister in the courts of Babylon. Luke was a physician. Solomon a philosopher-king. Matthew was a tax collector, while Paul was a converted Pharisee who made tents for a living.

For perspective, consider this. Imagine you could assemble your ten favorite writers and have each of them write a book on a single controversial subject. Now, you pull the whole thing together, unedited, as the ‘definitive’ work on that particular topic.

Would the finished product, do you imagine, flow together as seamlessly as do the books of Scripture? Would they be in harmony and without a single contradiction? Would they be accurate in all possible areas and each progressively explain and expound upon the book that came before?

Remember, you are using your ten favorite writers, all living at the same time, all addressing only one topic. The Bible is the product of 40 writers over 40 generations addressing every topic from science to medicine, from creation to the destruction of the world, from, as Norman Geisler once put it, “Paradise Lost in Genesis to Paradise Regained in Revelation.”

Moses wrote from the wilderness; Jeremiah from a dungeon. Daniel wrote from Nebuchadnezzar’s palace, Paul from within the walls of a Roman prison awaiting his execution.

John wrote from exile on the Island of Patmos when he was a very old man, while much of the old Testament was written on Israel’s battlefields by warriors and shepherds.

The Bible was written on three continents in three different languages; Hebrew, Aramaic and Greek, yet it reads as if it flowed from a single pen.

It addresses thousands of controversial subjects, ranging from the origins of the universe and the natures of both God and man to the events that will take place in the last generation before the return of Christ.

And it does so in complete harmony.

Think of it! Now return, for a second, to your ten favorite authors analogy and look at them side by side. No contest, right?

The Bible is unique in its survival against supernatural odds. Though written on perishable material, it has been faithfully copied and recopied down through the ages, while its style, correctness, or existence did not diminish.

Manuscripts discovered at Qumran and known collectively as the Dead Sea Scrolls (including the complete Book of Isaiah), testify to the accuracy of the copyists.

Compared to other ancient writings, like those of Plato or Socrates, the manuscript evidence for the Bible is greater than for any ten pieces of classical literature combined, according to Josh McDowell’s ‘Evidence that Demands a Verdict’.

According to the Guinness Book of World Records, the Bible is the best selling book of all time, with sales of 2.5 billion copies between 1815 and 1975. By the end of the 19th century, the Bible had been translated into 337 languages. There are at least portions of the Bible now in over 2,000 languages.

There have probably been as many copies of the Bible burned by dictators trying to suppress it as there were copies that survived. In 303 AD, Diocletian attempted to exterminate the church and decreed that every manuscript of the Bible was to be seized and destroyed. He had the words ‘extincto nomine Christianorum’ (the name of the Christians having been destroyed) put over the ashes of a copy of the Bible.

Voltaire, the famous French atheist, predicted that Christianity would be swept from existence and pass into history within 100 years of his time. Voltaire died in 1778.

In a delicious irony of history, his house and printing press was eventually sold to the Geneva Bible Society — to print Bibles!

Unlike any of the other sacred texts of any religion, the Bible makes clear and precise prophecies concerning future events. Not only does it make those prophecies, but it claims 100% accuracy, 100% of the time.

The Bible’s track record of fulfilled prophecy — up to and including the restoration of Israel in this generation — conforms to the Bible’s impossible standard of perfect accuracy.

In addition to being a book of prophecy, the Bible contains scientific, medical, historical and geographic knowledge that was impossible for anyone to know at the time.

The oldest book of Scripture, chronologically speaking, is the book of Job. Job lived in the Middle East, probably in the area of southern Iraq.

Yet Job refers to the ‘frozen face of the deep’ and the ‘hoary frost'(38:30) as well as recording such scientific knowledge as the fact that light is in motion or that winds move in circular patterns instead of a straight line.

The speed of light and study of climatology are recent scientific disciplines. And no science can explain Job’s knowledge of Arctic conditions from southern Iraq — centuries before Moses was inspired to write the Book of Genesis.

While sailors in Columbus’ day believed the world was flat, Isaiah referred to the Lord as ‘sitting on the circle of the earth’ 500 years before Christ. (Isaiah 40:22)

Unlike other sacred texts that portray their principle characters as men of extreme holiness, the Bible’s characters were anything but. Not only do all authors agree on the same subject, unlike any other great work, they are painfully frank about their shortcomings and failures.

From Adam and Eve blaming each other and the serpent for the Fall to Noah’s drunkeness to Lot’s incest to David’s adultery and murder, the Bible’s patriarchs and prophets are flawed human beings, just like us.

What makes the Bible unique among the sacred texts of the world’s religions is its Author. “For the prophecy came not in old time by the will of man: but holy men of God spake as they were moved by the Holy Ghost.” (2nd Peter 1:21)

Because of its Divine Authorship, the Bible claims, “All scripture is given by inspiration of God, and is profitable for doctrine, for reproof, for correction, for instruction in righteousness:” (2 Timothy 3:16)

We all know people who know nothing of Scripture that are more than willing to debate its intricacies and dispute its truths. If you were to ask those same people to debate the relative merits of the Texas Penal Code provisions on disorderly conduct, they would probably decline because they never studied the Texas Penal Code.

But they will argue about ‘whether a loving God could send people to hell’ until the cows come home, misquoting Scriptures they can’t cite and denying truths before they hear them.

“But the natural man receiveth not the things of the Spirit of God: for they are foolishness unto him: neither can he know them, because they are spiritually discerned.” (1 Corinthians 2:14)

The evidence of its Authorship abounds, from its composition to its inerrancy to its unique standing among the world’s literature.

“Every word of God is pure: He is a shield unto them that put their trust in Him.” (Proverbs 30:5)

“For the which cause I also suffer these things: nevertheless I am not ashamed: for I know Whom I HAVE BELIEVED, and am persuaded that He is able to keep that which I have committed unto Him against that day.” (2nd Timothy 1:12)

The Ultimate Trip By Jack Kinsella What is ‘death’? What happens to us when we…

The ‘Defeated’ Christian By Jack Kinsella You’ve all seen him. The defeated Christian. The guy…

Chariots of the Gods?

Chariots of the Gods? By Jack Kinsella There exists a more-or-less universal human memory of…

Grace That is Greater Than ALL Our Sin

Grace That is Greater Than ALL Our Sin By Jack Kinsella From time to time,…