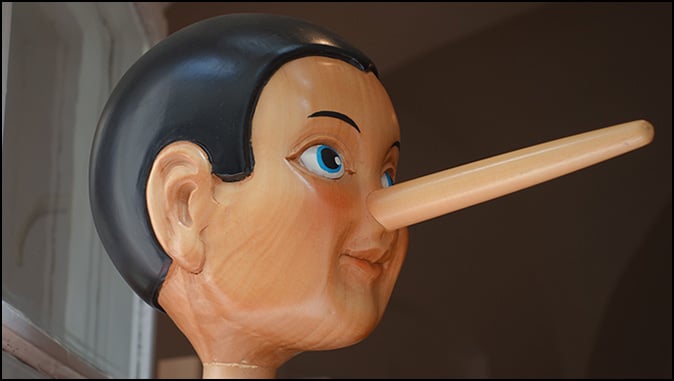 The Lie
By Jack Kinsella

According to a new study conducted by researchers in Slovenia published in “Critical Care”, a peer-reviewed journal, between 11 and 23% of survivors of heart attacks report having had Near Death Experiences, or NDE’s.

They say that people who have “near-death experiences,” such as flashing lights, feelings of peace and joy and Divine encounters before they pull back from the brink may simply have raised levels of carbon dioxide (CO2) in the blood.

The study’s conclusions were apparently embraced by the media without comment, which given the subject material, is worth discussing. A typical example would be the UK Independent’s Life flashing before your eyes? It’s just raised CO2 levels

“Scientists in Slovenia studied 52 patients who had suffered cardiac arrest, using questionnaires to determine if they had had near-death experiences (NDEs). They also looked at data including carbon dioxide levels.

According to the study, published in Critical Care, 11 patients reported NDEs, with more incidences among those with a higher concentration of carbon dioxide in the breath and arteries.

It concluded: “As much as one fifth of out-of-hospital cardiac arrest patients report NDEs during cardiac arrest. Higher initial petCO2 [carbon dioxide in air exhaled from the lungs] and higher arterial blood pCO2 [the pressure of dissolved carbon dioxide in the blood] proved to be important in the provoking of NDEs.”

That was about the extent of media curiosity. It implies to me a general sense of relief, as in, “It’s just CO2 levels. Whew! You had me worried, there for a minute.”

Suppose the study had concluded in some way that the phenomenon was supernatural, rather than merely natural? It seems highly unlikely that the media would accept such a conclusion so uncritically.

For example, the study involved 52 patients, of whom 11 recalled experiencing NDE’s. Examining the conclusions critically, it suggests that if one in four actually recalled them then it must be a near-universal experience.

Are there studies associating elevated CO2 levels to NDE-like hallucinations on patients who aren’t near death? Or is this a guess? I don’t know, and evidently no one among the mainstream media thought it worthwhile to ask.

Instead, the study’s conclusions conform with what they preferred to believe all along – that death is the cessation of existence and there is nothing beyond the grave.

To the humanist or ‘rational’ thinker, the headline to this story is of the “This just in! Beer makes you drunk!” category. It doesn’t matter if the study is true, as long as its conclusions are comforting.

So it was largely reported as unquestionably factual.

Before going on, I remain neutral on the subject of NDEs. There is such a thing as Near Death Experiences — there is no denying it…

Whether they are the result of a chemical reaction that takes place as the brain dies or an actual spiritual experience is irrelevant to the fact that they exist.

People report them, and there are medical studies that examine them. So, whether chemical reactions or actual experiences, they are real enough, especially to those who recall experiencing them.

The Apostle Paul reported that, having been stoned to the point of death outside the city of Lystra, he then found himself in the ‘third heaven’ where he received Divine revelation. (2nd Corinthians 12:2-7)

There is, therefore at least peripheral Scriptural precedent for the concept.

NDE’s are NOT evidence a person is saved; many of those who reported NDE’s report not only seeing hell, but report encounters with demons and hellfire.

If Near Death Experiences are evidence of anything, they are evidence that there is something that exists beyond this life. But that’s about as far as anybody can reasonably take what we learn from NDE’s.

Near Death Experiences are not doctrinal. Neither are they necessarily anti-doctrinal. At best, they are doctrinally neutral. They play no role in a person’s salvation or condemnation. Nobody can experience it except the person involved.

Very few details of what they report back about their experiences line up with advanced Bible doctrine, but that’s irrelevant. Mature Christians aren’t looking to someone’s recollection of what happened when they were in a coma for doctrinal truths — that’s what Scripture is for.

Neither are NDE’s an evangelical tool one could use to lead somebody to Christ. Most NDE’s provide just as much ‘evidence’ of Buddha as they do of Jesus.

But the suggestion of the near-universality of the experience itself is as equally indicative of life beyond the grave as it is to elevated levels of CO2.

Whether or not the study’s conclusions were true was unquestioned, which precisely conforms to the definition of truth the Apostle Paul predicted would provide the platform necessary for the rise of antichrist.

Truth isn’t what is true. Truth is what people want to believe is true.

“And now ye know what withholdeth that he might be revealed in his time. For the mystery of iniquity doth already work: only He who now letteth will let, until He be taken out of the way.” (2nd Thessalonians 2:7-8)

In this chapter, Paul is consoling the Church at Thessolonika, who had evidently heard that the Lord had already returned for His Church and that they had been left behind.

“Now we beseech you, brethren, by the coming of our Lord Jesus Christ, and by our gathering together unto Him, That ye be not soon shaken in mind, or be troubled, neither by spirit, nor by word, nor by letter as from us, as that the day of Christ is at hand.”

Note the distinction between the tenses of our gathering together unto Him and that it would mean the Day of Christ is at hand.

The Day of Christ is the Lord’s triumphant return at His Second Coming, in power and glory and in full view of the world.

“Behold, He cometh with clouds; and every eye shall see Him, and they also which pierced Him: and all kindreds of the earth shall wail because of him. Even so, Amen.” (Revelation 1:7)

But Paul interprets “the gathering together of the saints unto Him” as a different event than the 2nd Coming, saying instead that the ‘gatherering’ is a signal that the 2nd Coming is at hand.

The Thessalonians think they’ve been left behind. Paul says, “no, and here’s why.”

“Let no man deceive you by any means: for that day shall not come, except there come a falling away first, and that man of sin be revealed, the son of perdition.” (2nd Thessalonians 2:3-4)

If there hasn’t been a sudden and precipitous (and therefore identifiable) period in which the godly have suddenly turned away from God, then the time is not right for the ‘son of perdition’. Paul is clearly exasperated with them, reminding them that he already explained this to them previously.

While the mystery of sin is already at work, (the lie) the indwelling Holy Spirit keeps the lie in check by guiding believers in the Truth.

“Howbeit when He, the Spirit of truth, is come, He will guide you into all truth: for He shall not speak of Himself; but whatsoever He shall hear, that shall He speak: and He will shew you things to come.” (John 16:13)

Until, Paul reminds them, He is “taken away”:

“And then shall that Wicked be revealed, whom the Lord shall consume with the spirit of His mouth, and shall destroy with the brightness of His coming:”

Finally, Paul explains, the antichrist is preceded by “a lie” that guarantees damnation and explains why.

“And for this cause God shall send them strong delusion, that they should believe a lie: That they all might be damned who believed not the truth, but had pleasure in unrighteousness.” (2nd Thessalonians 2:11)

I’ve often contemplated that Lie and what it might be. It must be somehow indelibly linked with an identifiable period in Church history and in some way related to the revelation of the antichrist.

Finally, it must be delusional. The dictionary defines ‘delusional’ thusly: “a persistent false belief held in the face of strong contradictory evidence.”

The study on NDE’s was immediately acceptable to the mainstream as “scientific truth” because it denies the existence of an afterlife, and therefore a God to whom we must all give account; “because they received not the love of the truth, that they might be saved.”

If one doesn’t have a greater love for the truth than one does for his sin, then the truth he seeks will be one that allows him to keep the thing that he loves most. So why not immediately accept a study in Slovenia on 52 heart patients as the definitive answer to the question, “Does God exist?”

THAT is the delusional lie that the world is eager to accept in the face of “strong contradictory evidence” – that God does not exist and therefore there is no eternal accountability.

The kind of delusion that can accept the DNA evidence that says each of us is made out of tiny nano-computers faster and smarter (but compatible!) with the most advanced computers we can design, exquisitely pre-programmed with every detail of your physical being and conclude it must the result of unguided evolution.

What is the lie that Paul says will engulf the whole world before the antichrist can be revealed?

And every spirit that confesseth not that Jesus Christ is come in the flesh is not of God: and this is that spirit of antichrist, whereof ye have heard that it should come; and even now already is it in the world.

The whole world has not yet embraced the Big Lie. It is impossible for Bible-believing, Blood-bought, Spirit-filled Christians to do so, because of the indwelling Restrainer Who guides those He indwells in all truth and reveals unto them the things to come. Until He is taken out of the way.

According to the Apostle Paul, that event takes place during our gathering together unto Him before the Day of Christ, which would then be ‘at hand.’

It must take place before the antichrist can be revealed, because believers know the truth and therefore will not be deluded, since Paul says the strong delusion is sent by God and that ALL would be damned because they received not the love of the truth.

First, the Lord comes for His Church, in ‘our gathering together unto Him” — removing the Restrainer and the Guide into all truth.

Then, that Wicked is revealed, who is able to sway the whole world because they prefer his ‘truth’ – which Paul says allows them to continue to have pleasure in unrighteousness.

Then comes the period of judgment that is prophesied to fall upon those that dwell upon the earth.

“Therefore, brethren, stand fast, and hold the traditions which ye have been taught, whether by word, or our epistle.” (2nd Thessalonians 2:17)

“Wherefore, comfort one another with these words.” (2nd Thessalonians 5:18)