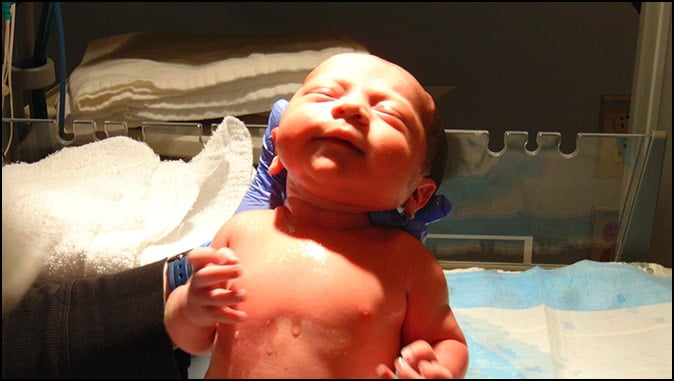 The Joy of Sorrows
By Jack Kinsella

Our fifth granddaughter made her debut into this world at just after two this morning. (Of course). She didn’t really want to make the trip — the doctor began the process of inducing the birth on Saturday morning.

It was a very long Saturday for Mike and Kerilyn, (yes, we have TWO sets of M&Ks) but Sunday was even longer. Still no baby. The doctor said that for sure, they would entice little Natasha out by Monday.

So Monday morning, Gayle and Char made the two-hour drive to Kitchener so they could be there to greet Natasha when she made her grand appearance. The hospital gave Kerilyn an epidural, broke her water and put her on some kind of baby-birth inducing drip.

And waited. The hospital visiting hours ended at 8:30 and still no baby.

So Gayle and Char packed up and headed home. They got home a little after ten-thirty. They just missed her. At just after two, the doctors were forced to go in and get little Natasha in an emergency C-section operation.

This morning, mother and baby are doing fine. Father is a basket case. Gayle is packing up her stuff so she can go up to Kitchener and spend a few days helping out with grandson Tristan and their Irish setter puppy.

And so, since Saturday, we have all been doing that thing that every parent and grandparent who ever lived has experienced. The Bible calls it “the beginning of sorrows” although it ends in a state of incomprehensible joy.

That’s the thing about babies being born that I find the most marvelous — the way that the incomprehensible joy of the birth erase, or at least, diminishes the memory of the sorrows to the degree that most mothers willingly do it again. And sometimes, again. And again. And again.

“I will praise thee; for I am fearfully and wonderfully made: marvellous are thy works; and that my soul knoweth right well.” (Psalms 139:14)

How marvelous? How wonderful? I think I can speak for the Brotherhood of Man when I say that if it was up to men to have the babies, Cain would have been an only child.

When Jesus was describing the signs that would herald His return, He said, “nation shall rise against nation, and kingdom against kingdom: and there shall be famines, and pestilences, and earthquakes, in divers places.” (Matthew 24:7)

By themselves, these aren’t signs, they are merely restatements of the natural order of things, events common to the history of man.

Ethnic wars and wars between ‘kingdoms’, famines, pestilences and earthquakes all make their first appearances in the Book of Genesis.

But Jesus described these things using a very specific metaphor — that of a woman in labor. He said in verse 8,

“All these are the beginning of sorrows.”

The word rendered ‘sorrows’ is ‘odin’ — which means, “the pain of childbirth, travail, pain, or birth pangs.” Every parent who has ever lived could instantly grasp the meaning of this metaphor — that is why Jesus chose it.

As the birth of a child approaches, the mother begins to experience labor pains, which, having once begun, continue to increase in both frequency and intensity as the moment of birth approaches.

Prospective parents in Jesus’ day timed the interval between the contractions the same way we do today. It was a carefully chosen metaphor designed to resonate with all people, of all cultures, in all generations.

But, to the generation to whom those signs were addressed, the meaning would be unmistakable. Since 1948, there has been a discernible uptick in the frequency of all these catastrophic events.

Each side could produce its own statistics to disprove the other side, and the battle rages on — is global warming responsible for the increasingly violent global weather patterns? Or not?

From the perspective of Bible prophecy, who cares? What Jesus warned of was the fear of these things — insofar as Bible prophecy is concerned, the cause is irrelevant.

In the early 90’s I used to regularly run into the same lady at Bible prophecy conferences. So often, in fact, that we nicknamed her the “Earthquake Lady.” She would come equipped with reams of information that ‘proved’ earthquakes are not increasing in either frequency or intensity. Yet they are.

Global warming opponents, armed with equally impressive reams of information, vociferously deny that there has been any unusual changes in global weather patterns, arguing instead that it is just part of a cycle.

“Historical records of solar activity indicate that solar radiation has been increasing since the late 19th century. If a trend, comparable to the one found in this study, persisted throughout the 20th century, it would have provided a significant component of the global warming the Intergovernmental Panel on Climate Change reports to have occurred over the past 100 years.”

There is a school of scientific thinking that predicts the Earth is perhaps 150 years into the collapse of the Earth’s magnetic field. The EU has even approved the deployment of a trio of new satellites, called ‘Swarm’.

The mission of ‘Swarm’ is to monitor the collapsing field to help scientists forecast when the compass needles will start pointing south.

A group of leading space scientists from NASA and universities in the US, Europe, Russia and Australia recently sent a letter pleading with the Australian government to rejoin the asteroid search seven years after that country had dropped out.

According to them, the odds of a catastrophic asteroid strike on the Earth sometime in the next century are about 1-in-5,000.

The UN claims that we are witnessing, on an increasing scale in both frequency and intensity, earthquakes, famines, wars and pestilence. NASA continues to document the unexpected and unsettling changes in the sun’s solar flare cycles.

The European Union is monitoring the collapse of the Earth’s magnetic fields, while scientists from all countries are urgently searching the stars for killer asteroids.

“And there shall be signs in the sun, and in the moon, and in the stars; and upon the earth distress of nations, with perplexity; the sea and the waves roaring; Men’s hearts failing them for fear, and for looking after those things which are coming on the earth: for the powers of heaven shall be shaken.“

Everybody has a reason to explain why the sun is out of phase, why we should be scared to death of falling space rocks, or why the global weather patterns are growing increasingly unpredictable and violent.

‘Why’ isn’t important. What it all means, when taken together into the Big Picture for the last days, however, is of eternal importance.

“And THEN shall they see the Son of man coming in a cloud with power and great glory. And when these things BEGIN to come to pass, then look up, and lift up your heads; for your redemption draweth nigh.” (Luke 21:28)

“And that, knowing the time, that now it is high time to awake out of sleep: for now is our salvation nearer than when we believed.” (Romans 13:11)

All this is the beginning of sorrows for this old world, and we are eyewitnesses to it. But, bringing the baby metaphor full circle, what begins as sorrows eventually brings us to the point of unspeakable joy.

But for now, we’re still timing the labor pains. For now.

The Shroud of Turin

The Shroud of Turin By Jack Kinsella In 1988, researchers tested the famous “Shroud of…

Nothing But The Blood