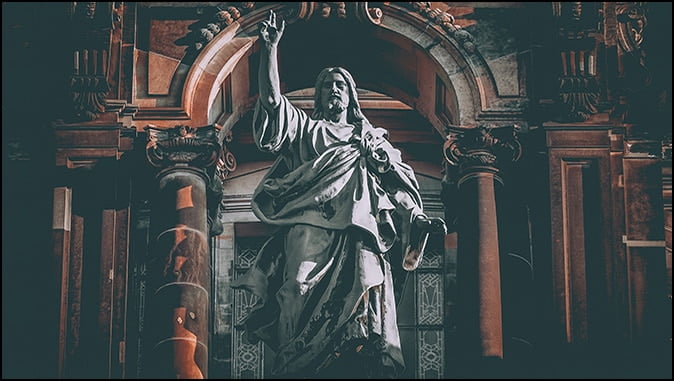 The Jesus ”Conspiracy”
By Jack Kinsella

The other day, a critic sent me a link to a book called “The Jesus Conspiracy” explaining that I had been duped by a two-thousand year-old confidence game perpetrated by a sect of Jews.

It is a long and convoluted theory that begins one hundred years after the fact, so to speak:

“About 2,000 years ago, Galilee was home to many competing Hebrew factions such as the Essenes, Saducees, Pharisees and Samaritans, all practicing their own brand of Judaism. Every sect of the day knew that they were in transit from the war-torn Age of Aries and brutal Roman Conquest to a hopefully more peaceful Age of Pisces. They also knew that a 400-year-old prophecy foretold that a messiah would be born who would lead the Hebrews out of oppression. Of course, each sect hoped that the messiah would be one of their members, because all members of the sect would then benefit from the kudos. As part of their bid to regain spiritual leadership, the members of one sect took matters into their own hands and decided to come up with their own messiah story. And they set it 100 years in the past so no one could contradict it.”

Somebody went to a lot of trouble to pull together all the material for this book, which is based on suppositions and allegations that have been passed down through the ages, all aimed at discrediting the Gospels as part of a grand conspiracy to advance a myth.

My correspondent was positively gleeful and dared me to refute the premise of the book, which is that Jesus was constructed to fit Bible prophecy — but after the fact. I explained to him that, had the author simply begun BEFORE the fact, the book would have never existed.

It is a matter of undeniable, irrefutable archeological fact that the Book of Isaiah, including its multiple Messianic prophecies, was written at least 100 years before Christ. It was actually written much earlier than that.

The Book of Isaiah is universally dated by Jewish records as existing five hundred years before Christ, but the copy found in Qumron buried among the Dead Sea Scrolls is positively dated to 100 BC, so it could not POSSIBLY be younger than 100 BC.

So even using the date of the oldest existing manuscript, the prophecies of Isaiah preceded the events they predicted by more than a century.

Isaiah predicted the Messiah would ‘despised and rejected of men’. Isaiah said He would be ‘wounded for our transgressions’ and ‘bruised for our iniquities’. The NIV translates Isaiah 53:4-6;

“Surely He took up our infirmities and carried our sorrows…and the LORD has laid on Him the iniquity of us all.”

Isaiah notes that He was ‘cut off from the land of the living’ for ‘the transgression of My people’.

That these are independently verifiable, historical facts is indisputable. Roman custom was to crucify the condemned under a banner proclaiming the crime for which they were being punished.

Josephus and the Jewish Talmud confirm His execution under the banner of “King of the Jews“. Pilate ordered that proclamation because Pilate found Him guilty of no other offense.

What does that tell us? It tells us that Jesus could NOT have engineered His own Death or arranged the crime for which He was convicted. Why? Because the “crime” was so unique it had to be invented, first.

The Gospel of John records that Caiaphas, another verifiable historical figure, in making his case to send Jesus to Pilate for execution, argued that;

And the Gospels were first circulated within living memory of the event, not one hundred years later.

The Gospel of Matthew is generally accepted to have been written sometime after 37 AD but well before 100 AD — 70 years after the fact.

Why do some scholars date the Gospels post-AD 70? Since the Gospels refer to the destruction of the Temple, they assume the Gospels were written sometime after that, demonstrating the bias inherent in the later dating.

They begin with the assumption that Jesus could not be Divine, and then base their final conclusion on their initial assumption. Their minds were made up before they began. Why even bother?

Suppose somebody published a book disputing the fact that JFK was shot in the head at Dealy Plaza, Dallas, on November 22, 1963, almost FIFTY years ago.

I remember the event — I witnessed it, so to speak, on live television. I know better and would be happy to share my recollection of the truth with all that asked.

Mark’s Gospel was in circulation, at the latest, only forty years after the Crucifixion.

If Mark’s Gospel wasn’t generally accepted as an accurate reflection of what the citizens of Jerusalem had personally eye witnessed, the Gospels would never have achieved the level of respect accorded them.

Isaiah said He was assigned a grave with the wicked, but with the rich His death.

Jesus could not have arranged to be crucified between two thieves and He was already dead when Joseph of Aramithea petitioned Pilate for His body, which was later placed in a rich man’s tomb.

And if it WERE possible to do so, why would He? That is a worthy question. If He were not Who He said He was, what would be the point?

Wise man and prophet? Liar and Lunatic? Or the Son of Israel’s God, crucified as “King of the Jews” as Israel’s King? Which logically fits the known facts?

The Book of Isaiah could not have been tampered with without attracting the attention of the Jews. And we have irrefutable evidence Isaiah’s prophecies are unchanged since the Isaiah Scroll found buried at Qumran was in circulation since 100 BC.

The Gospels could not logically have been tampered with after they were first circulated on the streets of Jerusalem. They reflected events within living memory that took place in what was a small and very close-knit community of Jews.

If they didn’t reflect the facts as the eyewitnesses remembered them, there would be some record of their dispute, given that the Jews boasted one the most literate and carefully documented societies of antiquity.

And if they do accurately reflect the events they record, then it is more than significant that there is no record of any serious contemporary dispute of the accounts of the dead being raised, sight being restored to the blind, paralytics being healed, etc.

The accuracy of the Gospel is as much a matter of logic as it is one of faith.

Is it even remotely logical to believe that the Gospels could have been altered in any significant way without attracting the notice of the early Church? To alter them after they entered the public record, considering the eyewitness factor already discussed, would be impossible.

And once they entered the public record, history shows they were so universally accepted as truth that Christians chose the lion’s den rather than to deny their contents. Who dies for a lie?

The first documented persecution of the Christians was during the reign of Nero (AD 37-68). Clearly, many of those that refused to deny Jesus were eyewitnesses to the events recorded by the Gospels.

The Roman historian Tacitus recorded in Book 15, Chapter 44 of his Annals of the History of Rome,

“[Nero] falsely charged with the guilt, and punished Christians, who were hated for their enormities. Christus, the founder of the name, was put to death by Pontius Pilate, procurator of Judea in the reign of Tiberius: but the pernicious superstition, repressed for a time broke out again, not only through Judea, where the mischief originated.”

If the Gospels were well-entrenched enough to inspire martyrdom within living memory of Jesus, then any subsequent alteration to make them ‘fit’ would not escape notice.

Then, we have the record of the Acts of the Apostles. Once again, we are relying as much on logic here as we are on faith to seek the answer to our questions from what is more or less undisputed historical fact.

We know that the Twelve were eyewitnesses to the events recorded by the Gospels from their own written testimony.

“For we have not followed cunningly devised fables, when we made known unto you the power and coming of our Lord Jesus Christ, but were eyewitnesses of His Majesty.” (2nd Peter 1:16)

Did Peter write the Gospel that bears his name? The people to whom he was writing believed he did — and they were in the best position to know.

His epistles were accepted as Divinely-inspired doctrine by the early Church, many of whom were ALSO eyewitnesses to His ‘Majesty’.

Ancient records confirm that Peter was crucified for preaching the Gospel. Roman custom demanded he be allowed to recant. It is logical to assume, since he was crucified, that the Bible’s account of his refusal is an accurate record.

It was Peter that specifically noted that;

“prophecy came not in old time by the will of man: but holy men of God spake as they were moved by the Holy Ghost.” (2nd Peter 1:21)

If Peter didn’t believe it was true, it is illogical to believe he would have allowed himself to be crucified for a lie.

Then there are the rest of the Apostles. All met similarly gory deaths. None of the accounts are historically disputed. All had the opportunity to renounce Christ, all chose grisly deaths.

(Only John escaped death by martyrdom. He was banished to Patmos — after John survived an attempt by Nero to martyr him by boiling him alive.)

Logically, then, we have the undeniably prophetic passage in Isaiah, fulfilled in the life of Christ through a series of humanly uncontrollable events that led to His historically verifiable torture and execution to consider.

Then, we have the eyewitness factor and that the eyewitness accounts recorded in the Gospel were accepted within living memory of the events described.

That it was believed as absolute truth is testified to by the rivers of blood shed by Christians as early as the reign of Nero.

Finally, we have the eyewitness testimony of the Apostles, who were alive at the time the Gospels they published made them the undisputed leaders of the early Church.

For the Messianic prophecies to be the result of a later conspiracy to ‘fix’ them, given the known facts, is both a logical and historical impossibility.

It is illogical to conclude that the early Church, its persecution and the reams of historical evidence attesting to its faithfulness in the face of grisly death, was founded upon an easily-disproveable lie concerning events that occurred within living memory.

And it is illogical to assume they could have been subsequently altered without those who were willing to die for the truths contained therein noticing the changes.

The lengths that some will go to deny Jesus is a source of unending amazment to me. What do they get if they are right? Nothing at all. Just a cold grave and eternal nothingness.

And what do they get if they are wrong? Jesus described it three separate times using the identical phrase:

Finally, there is a principle of logic dubbed ‘Occam’s Razor’, named for the philosopher, Sir William of Occam, who first published it.

Occam’s Razor says that, given a variety of explanations, the one that most closely fits the known facts is logically the most likely to be true.

Which can only be that the events recorded in the Gospels happened precisely as recorded.

Thinking, Free of Thought By Jack Kinsella To an unbelieving skeptic, religious faith is a…

Thou Shalt Not Bear False Witness

Nineteen Eighty-Four By Jack Kinsella In that seminal year of 1948, the year that Israel…

Four Resurrections — One Judgment By Jack Kinsella During the thousand year Millennial Reign, the…