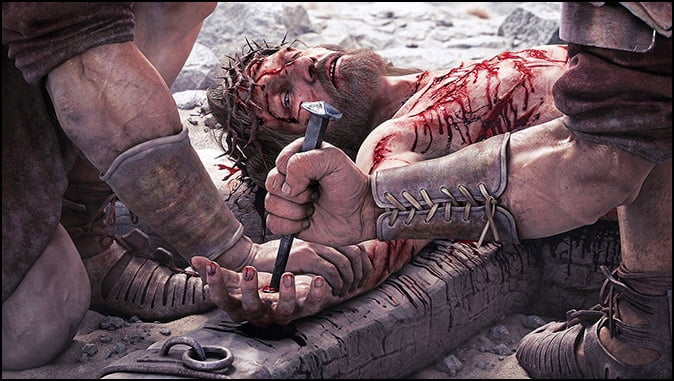 The Hope that is In You
By Jack Kinsella

“But sanctify the Lord God in your hearts: and be ready always to give an answer to every man that asketh you a reason of the hope that is in you with meekness and fear.” (1st Peter 3:15)

This morning, instead of rehashing the usual state of global catastrophe, I thought might discuss the reason for the hope that is in us. We have reason for hope because we are saved and we are saved because Jesus Christ lived the life we should have lived and died the death that we deserve.

This is called the substitutionary sacrifice. We are justified by His Blood and guaranteed eternal life by His Resurrection.

But why? Skeptics call Christianity a bloody religion, and even within the Church, there are those who question the blood aspect of salvation. The Scripture says God’s Justice demands a sacrifice, but for most Christians contending with the skeptic, that answer is unsatisfactory.

The explanation that only a sinless man was qualified to take on the sins of the world makes sense, but it doesn’t answer the nuts-and-bolts question of why He had to die. Not fully.

The answer to the nuts-and-bolts legalities is found, not in the New Testament, but rather in the Old.

In Genesis Chapter 15, we find Abram questioning God’s promise that his seed will be numbered as the stars of heaven and that they would inherit the land to which God had led him.

Genesis 15:6 says “And he believed in the LORD; and he counted it to him for righteousness.” But Abram wanted a guarantee, nonetheless.

Abram knew what to do next, since this was something he was familiar with. “And he took unto him all these, and divided them in the midst, and laid each piece one against another: but the birds divided he not.”

The blood covenant worked this way. The animals were slaughtered and cut up. The pieces were intermingled and then carefully arranged to form a kind of aisle through which the two parties to the covenant would walk together, hands joined.

The principle of a blood covenant, and the symbolism of the rended animal parts was clearly understood to Abram. Whoever broke the covenant would end up like those piles of animals.

A blood covenant was, by common custom, a joining of 2 or more persons, families, clans, tribes, or nations, where the participants agree to do or refrain from doing certain acts. More specifically, God had proposed a patriarchal covenant.

The patriarchal form of covenant is a self-imposed obligation of a superior party, to the benefit of an inferior party. In this form, the terms the parties use to refer to each other are: father and son.

God’s proposal included not only Abram, but extended to Abram’s seed forever.

(Galatians 3:29 makes plain that Christians are also “Abraham’s seed, and heirs according to the promise.”)

Are you still with me? Here’s where we are so far. Abram has just prepared a blood covenant between himself and God in which his seed would forever be bound to God as heirs. To be an heir, under the implied terms of the covenant, also required being faithful to the Father.

Abram understood those terms and waited for God to appear. Consider the picture: Abram waited, driving away the carrion eaters from his grisly creation, waiting for God Himself to come down, join hands with Abram and together, they would swear a blood oath.

God would be the Father of Abram and his descendants, who would then be required behave as sons to keep that covenant. Genesis 15:12 records that as Abram waited for God, a deep sleep fell upon him. During that deep sleep;

“it came to pass, that, when the sun went down, and it was dark, behold a smoking furnace, and a burning lamp that passed between those pieces. In the same day the LORD made a covenant with Abram, saying, Unto thy seed have I given this land, from the river of Egypt unto the great river, the river Euphrates:” (Genesis 15:17-18)

Don’t miss the importance of this point: While the covenant was between Abram and God, by passing through the aisle alone, God signed the contract — alone — for both sides, binding Himself to keeping both parts!

We know that Abram’s seed did NOT remain faithful to the covenant. And violating the blood covenant demanded that somebody had to die. That was what justice required.

The Apostle Paul was, before his conversion on the road to Damascus, a Pharisee, or a religious lawyer, one well qualified to explain the law of covenant oaths.

As Paul explains, “Know ye therefore that they which are of faith, the same are the children of Abraham. (Galatians 3:9) Further. that they which be of faith are blessed with faithful Abraham.” (3:9)

Of the covenant that God signed on behalf of Abraham, Paul explains “Though it be but a man’s covenant, yet if it be confirmed, no man disannulleth, or addeth thereto.” (3:15)

The covenant could only be confirmed when the price demanded for its violation was paid in full.

When the Law was given to Moses four centuries later, it was assumed by the Jews that to break it was to break the Abrahamic Covenant, for which the penalty was death. Remember, somebody had to die. But God signed on behalf of Abraham, and so as Paul pointed out, the blood penalty required of the covenant was paid in full by God Himself.

“And this I say, that the covenant, that was confirmed before of God in Christ, the law, which was four hundred and thirty years after, cannot disannul, that it should make the promise of none effect.”

Why did Jesus have to die? Because the covenant demanded satisfactory payment for its violation, and no one who had broken that covenant was qualified to stand in payment except those who signed it.

And God signed on behalf of Abram and his seed.

It is for THAT reason that God stepped out of eternity and into space and time. To keep the provisions of the original covenant and be a true Son, as it demanded.

And having kept its terms on behalf of sinful humanity, it was incumbent upon Him to make payment, as justice demanded, for its violation by those on whose behalf the covenant was signed.

To be torn and rended like the animals that formed the corridor through which God alone passed.

“But he was wounded for our transgressions, he was bruised for our iniquities: the chastisement of our peace was upon him; and with his stripes we are healed.” Isaiah (53:3)

To make restitution on behalf of the seed of Abraham. You. Me. And everyone who ever broke its provision of faithfulness. All of us.

Jesus made that payment on our behalf. On the Cross, as He gave up the ghost, Jesus cried with a loud voice ‘it is finished’ (Tetelestai!) meaning, “paid in full.”

The terms of the violated Covenant were met, and the price demanded was paid by its Signer. God’s justice was fulfilled. That is why Jesus took on a human form and allowed Himself to be crucified by His own creation.

That is the reason the Blood of Christ is so precious. Why nothing less would do. Because justice demanded it. It is the price of your redemption. It is a reminder of how valuable you are to God.

“For God so loved the world, that He gave His only begotten Son, that whosoever believeth in Him should not perish, but have everlasting life.” (John 3:16)