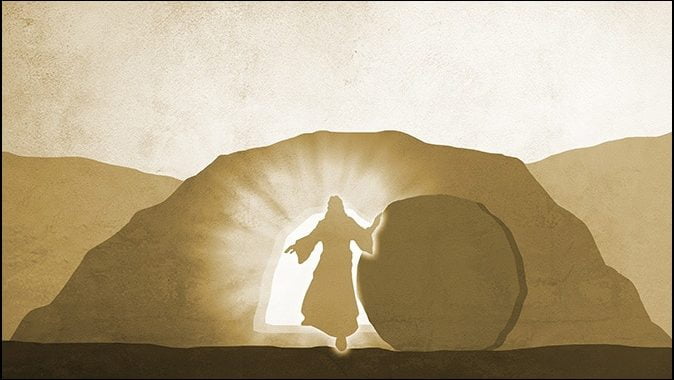 The Historical Resurrection of Jesus Christ
By Jack Kinsella

Easter is the day that Christianity commemorates that singular event in human history — the resurrection of Jesus Christ.

And as usual, in the weeks leading up to this day, the secular press corps has devoted gallons of ink and miles of column inches to its annual debunking of the ‘myth’ of Jesus’ resurrection.

This is also when various churchmen go public with their doubts about this central tenet of Christian teaching, questioning whether it REALLY happened, suggesting that if not, it doesn’t really make any difference.

In his book, “Jesus 2000”, for example, Dr. George Carey, Archbishop of Canterbury, makes this astounding statement: “Unlike the birth of Christ and the crucifixion,” he says, “Christians cannot know with the same certainty that He was resurrected.”

Writes the leading Anglican churchman; “I can tell you frankly that while we can be absolutely sure that Jesus lived and that He was crucified on the Cross, we cannot know that He was raised by God from the dead.”

Is he right? I mean, really. Is there a POSSIBILITY that the Resurrection is ‘unknowable’ apart from blind faith?

In other words, COULD there have been a Jesus Who, in the words of secular historian Josephus, ‘did many amazing works’ before being judged a political criminal and executed by Crucifixion, but Who wasn’t literally resurrected?

There is plenty of historical evidence attesting to an historical Jesus. Is it possible that He was a wise man, and a good teacher, or, as the Koran claims, even a prophet, but that the Resurrection was a legend tacked on later by His followers?

Most Christians I know have admitted a momentary twinge of doubt at some point, wondering if it were at least POSSIBLE that guys like Archbishop Carey might be right. That the Resurrection, if not an outright hoax, was a sincere effort on behalf of His followers to keep His teachings in the spotlight after His shocking and early death?

After all, it isn’t uncommon for the Jews to carefully record and revere the words of the great sages of history, like Maimondes or Ramban, the author of the Mishneh Torah.

Archbishop Carey is wrong when he says that there is no way to know with certainty that He was resurrected. And it makes a BIG difference.

“And if Christ be not risen, then is our preaching vain, and your faith is also vain.” (1st Corinthians 15:14) If Jesus Christ was not resurrected, then, by Paul’s own admission, our faith is in vain. Our faith is NOT in the fact Jesus lived and died. Everybody does that.

We aren’t saved by believing that He existed, as Dr. Carey proposes. Our faith is that, in His resurrection, Jesus defeated the power of death and hell for us all.

Despite the arguments from the skeptics and the God-haters, the Resurrection is as provable as is the existence of a Jewish carpenter from Nazareth Who ‘did many amazing works’.

There is the evidence provided by hundreds of living witnesses.

Consider the claim from the perspective of 1st century Jerusalem, a close-knit and articulate society:

A political criminal was convicted in a public trial and then executed in full view of thousands. That same convicted criminal was seen three days later; “by above five hundred brethren at once; of whom the greater part remain unto this present, but some are fallen asleep.” (1st Corinthians 15:6)

Jesus was well known in Jerusalem. There were those who loved Him, and many more who hated Him. Those people could certainly have confirmed or denied the accuracy of the reports of a resurrected Jesus.

Suppose I were to publish an account that said John Kennedy really died by slipping on a bar of soap in a bathtub in Boise, Idaho forty-one years ago.

It would never fly. Too many living witnesses saw what took place in Dealey Plaza to avoid a firestorm of controversy.

The Apostles preached and wrote of events that took place within the lifetime of their audiences. Think of how fantastic a claim the resurrection of Jesus truly is! If the record was not true, there would be evidence from the same period of accounts to the contrary.

Writes E. M. Blaiklock, Professor of Classics at Auckland University, “I claim to be an historian. My approach to Classics is historical. And I tell you that the evidence for the life, the death, and the resurrection of Christ is better authenticated than most of the facts of ancient history…”

In addition, the death of Jesus was a major event politically. As a consequence, so many security precautions were taken with the trial, crucifixion, burial, entombment, sealing, and guarding of Christ’s tomb that the circumstances would be well publicized throughout the Jewish community.

Jesus’ tomb was sealed with a Roman seal. The penalty for breaking it was crucifixion. The Apostles had proved themselves no heroes so far. All had abandoned Him and Peter denied Him three times. It is unlikely they would risk breaking a Roman seal to perpetuate a hoax.

When they found the empty tomb, the disciples didn’t fan out to the far reaches of the Empire with their story. They went straight back to Jerusalem. If their claim was false, it would be the last place to try and preach it. The story wouldn’t have lasted a single day in Jerusalem if the empty tomb were not already an established fact.

In addition to the claims of the Apostles, both Roman and Jewish records of antiquity admit an empty tomb. Coming as it does from such hostile sources, it adds even greater weight to the historical evidence.

The tomb was not just sealed with the seal of Rome, it was sealed with a two and a half ton boulder and guarded by Roman soldiers. If they WERE asleep (a death penalty offense) then somebody would have had to have quietly moved a 5,000 pound boulder without waking them.

Then there are the Apostles themselves to consider. Preaching a resurrected Jesus Christ meant social suicide. They were disowned by their families and their faith, were arrested, imprisoned and ultimately given the choice of a slow, painful execution or admitting they made it up.

If they KNEW that their ‘preaching was in vain’ as Paul called it, then they knowingly threw away their lives for nothing.

On the other hand, imagine if you KNEW Jesus they way that they did, saw the things that they saw, and stood watching at Pentecost as the Resurrected Jesus ascended bodily into heaven, and then were offered the choice to deny what you actually witnessed with your own senses.

“For we have not followed cunningly devised fables, when we made known unto you the power and coming of our Lord Jesus Christ, but were eyewitnesses of His Majesty,” writes Peter. (2nd Peter 1:16)

We can — and do — know for sure what escapes Archbishop Carey.

Jesus Christ was executed at Golgotha in full view of thousands of witnesses. Three days later, He was resurrected bodily and over the course of the next forty days seen alive by thousands more witnesses.

The story of His resurrection was unchallenged by living eyewitnesses, and so profoundly changed them that Saul of Tarsus, a Pharisee who despised Christ and persecuted His followers, became the Apostle Paul, the greatest witness to the truth of the Resurrected Jesus.

As Paul wrote to his disciple, Timothy, “For the which cause I also suffer these things: nevertheless I am not ashamed: for I know Whom I have believed, and am persuaded that He is able to keep that which I have committed unto Him against that day.” (2nd Timothy 1:12)

The skeptic’s arguments fall apart when weighed against the historical evidence. Jesus IS alive, and He IS coming again!