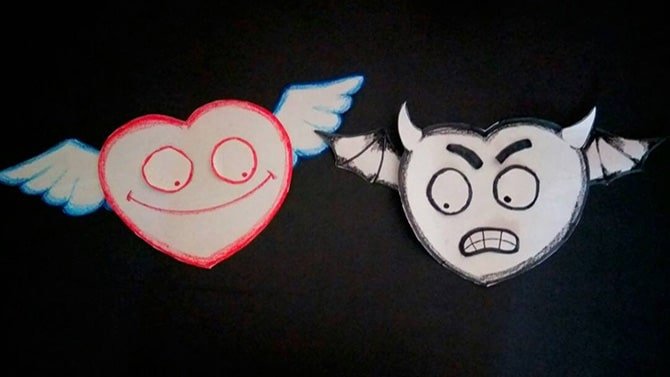 The Evil And The Good
By Jack Kinsella

After natural castastrophes like the Asian tsunami, Hurricane Katrina and the Haitian earthquake, somebody inevitably asks, “Where was God?”

Indeed, where WAS God when the earth started shaking? Was the earthquake a judgment or a punishment for evil? What IS evil and why did God create it?

That last question is the one that most atheists believe will send Christians scurrying for cover. Did God create evil? If He didn’t, Who did?

To begin with, ‘evil’ does not describe something, it describes the absence of something. Evil could not exist independently. You can’t see, touch, feel, smell or hear evil.

It is not one of the fundamental forces of physics, nor does it consist of matter, energy, or the spatial dimensions of the universe.

Evil is the absence of good. The less good one finds, the more evil it is. You can’t have evil without good.

But that doesn’t cut both ways. Good can and does exist independently of evil. Good is the default condition, whereas evil describes a condition that is less than good.

Yet evil not only DOES exist, it is the starting point of human life. (This observation always gets me into trouble, but it is provably true nonetheless.)

Did God imbue them with evil? That would be ridiculous, no?

Instead, babies come out totally neutral, since they have no intent, either good or evil. They are born in their most natural state. They are born with the sin nature that was passed on from Adam.

Most atheists assume that a personal God would only create a universe that is both good morally and perfect physically.

However, according to Scripture, the purpose of the universe is not to be morally or physically perfect. It is to provide a place where spiritual creatures can choose to love or reject God – to live with Him forever in a new, perfect universe, or to reject Him and live apart from Him for eternity.

It would not be possible to make this choice in a universe in which all moral choices are restricted to only good choices. One cannot choose between good and bad if bad did not exist.

The Haiti earthquake killed at least a quarter of a million people according to the latest casualty figures. Atheists argue that the earthquake proves God does not exist – or if He does exist, He is both capricious and cruel.

Christians responded with homilies (“The Lord works in mysterious ways”) or (worse) they argued that it was a judgment from God. Pat Robertson claimed the Haitians were being judged for an 1805 incident in which they allegedly sold their souls to the devil – and many Christians agreed with that assessment.

Nowhere in Scripture does one find where God judges the righteous with the evil. When God destroyed the earth with the flood, He spared the righteous (Noah and his family).

Abraham kept dropping the number and each time, God said He would not destroy the cities if there were even one righteous person it them. The few righteous that were there (Lot and his family) were warned to get out ahead of time.

And we also have the testimony of Jesus Christ — and He ought to know:

Were only the unrighteous killed in Haiti? That seems most unlikely. Did unrighteousness play a role? Undoubtedly.

The only building in Port au Prince to survive unscathed was the US Embassy, which was built to code. The rest were built by greedy contractors who cut corners to shave expenses.

Sin has its consequences.

“And we know that all things work together for good to them that love God, to them who are the called according to His purpose.” (Romans 8:28)

What about when bad things happen to Christians? Are they being punished for stepping outside God’s permissive will?

‘Punishment’ isn’t exactly the right word. God doesn’t punish Christians, He chastises them — which is a different animal entirely than punishment.

‘Punishment’ is retribution. ‘Chastisement’ is correction. They are two different things.

Scripture says, “There is therefore now no condemnation to them which are in Christ Jesus, who walk not after the flesh, but after the Spirit.” (Romans 8:1)

If there is no condemnation, then there is nothing to be ‘punished’ for.

On the other hand, Hebrews 12:6 reveals that chastisement is evidence that God loves us as sons. “For whom the Lord loveth He chasteneth, and scourgeth every son whom He receiveth.”

God created the universe in perfect harmony. The law of physics demands that for every action, there must also be an equal and opposite reaction.

For every good, there must be a corresponding evil.

There is no evil in the universe itself. It remains in harmony, perfectly balanced according to God’s will and functioning according to His laws. Evil exists only in a place theologians call the ‘cosmos diabolicus’ — we call it ‘earth’.

Evil is restricted to earth so that the universe doesn’t get infected by it. That’s why earth has an atmosphere — not to keep evil out…but to keep it IN.

In this generation, man has figured out a way to escape the atmosphere, and the result is an orbiting junk pile around the planet that, viewed from outside, would put one in mind of flies buzzing around you-know-what.

Bad things happen because they HAVE to happen in order for there to be a way of measuring what is good. It is through bad things that God reveals Himself to man.

God knows what He is doing – even when we don’t. When we pray for what we believe is a good thing and don’t get it, we wonder where God is or if He is listening.

We don’t know good from evil – good and evil are outcomes. Only God can measure the outcome of what we believe is an evil thing.

The most immeasurably evil thing in all recorded history was the crucifixion of Jesus Christ, the only Man Who ever lived a perfectly sinless life.

It certainly seemed evil at the time. But God knew the outcome of that act of immeasurable evil would be the salvation of millions.

“Which none of the princes of this world knew: for had they known it, they would not have crucified the Lord of glory. (1st Corinthians 2:8)

If you want to find God, you’ll find Him in prisons and hospitals, much more so than in mansions and fitness clubs.

Evil exists so that man can seek good and in the process, find redemption in Jesus Christ. It isn’t winning the lottery that brings sinners to their knees.

But losing everything…that’s a different story.