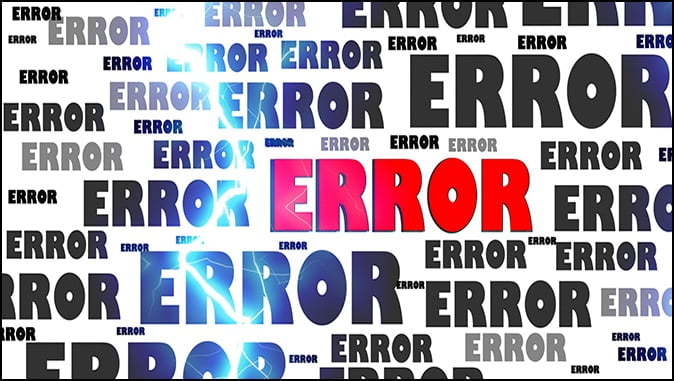 The Error
By Jack Kinsella

I am always surprised when I meet bona-fide dyed-in-the-wool born-again Christians to whom Bible prophecy is either irrelevant or is something they have written off as sensationalism. Many mainstream teachers and preachers write off the study of Bible prophecy as fodder for crackpots.

Students of Bible prophecy are routinely presented as unbalanced, suicidal, genocidal lunatics yearning for the judgments of a vengeful Lord culminating in the near-extermination of the human race.

I recall once when I managed to score an on-camera interview with former CIA Director William Colby. (Colby was known as a “media-friendly CIA director.”)

Colby was an ordinary-looking little man with thinning hair and big glasses who at first glance looked like an accountant.

It was only his eyes that betrayed the fact he was a trained and experienced assassin who once led the CIA’s Vietnam war as Saigon station chief. About halfway through the interview, Colby recognized where the line of questioning was headed and asked me, “who are you guys, anyway?”

“What does that stand for?” he demanded. “This Week in Bible Prophecy,” I replied.

“I’m outta here,” Colby said as he jerked the microphone from his lapel.

As he stormed away, I heard him say to an aide; “Bible prophecy! You ever do that to me again, you’re fired!”

It isn’t like Colby had a reputation for being a Christian — he didn’t. But his reaction was typical of how the subject of Bible prophecy is viewed by skeptics, whether inside or outside the Church.

Rick Warren is the pastor of one of America’s biggest churches, the “Saddleback Church” in Lake Forest, California. His book, “The Purpose-Driven Church”, published in 1995, has become something of an unofficial Bible for pastors and ministers eager to emulate Warren’s success.

Over 400,000 pastors and church leaders from around the world have attended a seminar or conference led by Warren and other pastors and based on the five “purposes” which Warren enumerates as worship, fellowship discipleship, ministry and evangelism.

Warren advocates a softer tone by evangelicals on issues like abortion and same sex marriage, signed a statement endorsing the global warming hoax and is an elected member of the Council of Foreign Relations.

The man sometimes called “America’s Pastor” is also author of “The Purpose-Driven Life” and a darling of both the media and the Christian ‘mainstream’. Warren argues in his book that an interest in Bible prophecy is a distraction from both living a Christian life and fulfilling the Great Commission.

“It is easy to get distracted and sidetracked from your mission because Satan would rather have you do anything besides sharing your faith. He will let you do all kinds of good things as long as you don’t take anyone to heaven with you. But the moment you become serious about your mission, expect the Devil to throw all kinds of diversions at you. When that happens, remember the words of Jesus: “Anyone who lets himself be distracted from the work I plan for him is not fit for the Kingdom of God.”

And then, Warren makes this astonishing statement:

“When the disciples wanted to talk about prophecy, Jesus quickly switched the conversation to evangelism. He said in essence, “The details of My return are none of your business”

The New Testament is literally filled with details about His return. Indeed, as He ascended into heaven, the Book of Acts tells us that two angels were standing nearby as they watched Him ascend into the clouds and out of sight.

“Which also said, Ye men of Galilee, why stand ye gazing up into heaven? this same Jesus, which is taken up from you into heaven, shall so come in like manner as ye have seen Him go into heaven.”

If the details of His return are none of our business, we need to scrap Matthew 24, Luke 21, Mark 13, part of the books of Acts, parts of both epistles to Timothy, parts of Hebrews, James, and all of the Book of the Revelation, just for starters.

What Bible does he use?

“Knowing this first, that there shall come in the last days scoffers, walking after their own lusts, And saying, Where is the promise of his coming? for since the fathers fell asleep, all things continue as they were from the beginning of the creation. For this they willingly are ignorant of, that by the word of God the heavens were of old, and the earth standing out of the water and in the water: Whereby the world that then was, being overflowed with water, perished:” (2 Peter 3:3-6)

The Apostle Peter’s second epistle was written as he was awaiting his martyrdom. Generally speaking, when a man knows he is about to die, there are two things that are universally accepted. The first is that he will share what is most important to him. The second is that he is telling the truth.

Even secular courts give great weight to a deathbed confession, on the grounds that a person who is about to die has no motive or reason to lie.

What was most important to Peter? Warning of what he called a “willing ignorance” about the approach of the last days, the return of Christ and the reclamation of the world.

Look how many false prophets claim to have direct revelation from God that either changes or adds to the Biblical record.

And yet they have no shortage of followers. It requires a “willing ignorance.”

Bill Koenig makes the point in his excellent “World Watch Daily” that roughly 100 million American church members have no understanding of Bible prophecy before pinpointing what I believe is one of the two main reasons why.

Koenig notes that of the twenty-five largest American church denominations, at least fourteen of them are supersessionist, meaning they adhere to the doctrine of replacement theology.

They believe that God abandoned the Jews after they rejected the Messiah and the covenant promises to the Jews were then transferred to the Church.

By this view, Israel is just another country in the Middle East. The Jews of Israel are not the Jews of the Old Testament, and even if they were, they are rejected by God and therefore worthy of rejection by the Church.

If the restoration of Israel is not a fulfillment of Bible prophecy (and it cannot be, according to supersessionism) then the entire prophetic timetable collapses, since all Bible prophecy for the last days centers around a restored Jewish state called “Israel.”

Since Israel is Jewish, is restored where God said it would be and follows the prophetic script to the letter (right down to being “born in a day”) arguing it is irrelevant to Bible prophecy is willing ignorance of the highest order.

The second reason that so many Christians deny Bible prophecy is fear. If Bible prophecy is true, then it means that the Lord will come back sometime within the lifetime of those who witnessed Israel’s restoration sixty-four years ago.

That would mean that time is rapidly running out. Unless it is all in the imagination of a bunch of Jew-loving crackpots who take some kind of demented joy out of believing in doomsday, which is evidently their preferred scenario.

This baffles me. The world is clearly on the brink of chaos and collapse. The probability of a global, total war is high and getting higher every day. Unless something happens to prevent total war, the result will be the annihilation of the human race.

Bible prophecy, by its very existence, establishes beyond question that the Bible is true, that the Lord remains on His Throne, that what appears to be chaos is really part of the Divine Plan and that everything is under control.

The growing economic and military might of Asia is explained as are the two hundred million Chinese bachelors seeking a home in the Chinese military.

Remove Bible prophecy and there is no pattern, no explanation, no blessed assurance and no hope.

The same God that predicted what has already occurred with such unerring accuracy will continue to perform His Will until His Purpose is accomplished. Bible prophecy proves God is still on His Throne and is intimately concerned with the affairs of men.

That promise has no expiration date. God’s blueprint for the future will continue to unfold with the same accuracy in the days ahead as it has in millennia past.

It is why what terrifies the world is what gives us hope. It’s why the world thinks we’re a more than a little bit nuts.

The Lord doesn’t work in ‘mysterious’ ways; He works according to His will. He has a purpose for everything that He does. Whether we understand that purpose is irrelevant — it is enough to know that HE does.

“So shall My Word be that goeth forth out of My Mouth: it shall not return unto Me void, but it shall accomplish that which I please, and it shall prosper in the thing whereto I sent it.” (Isaiah 55:11)

And we are His eyewitnesses. Maranatha!