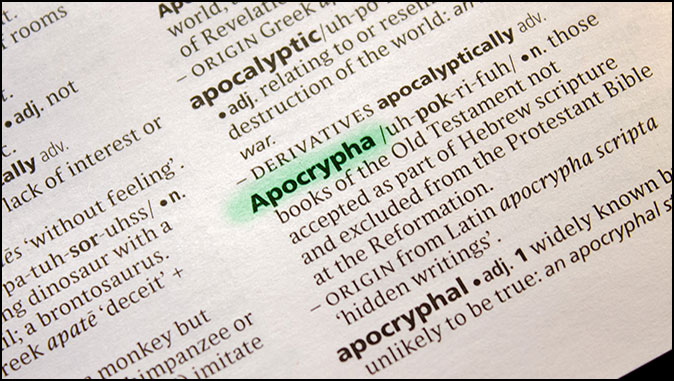 The Books of the Apocrypha
By Jack Kinsella

This is neither an anti-Pope nor anti-Jack Van Impe piece. Stay with me a minute.

The specific statement that stuck with me was Van Impe’s claim that the Pope believed in the pre-Trib Rapture because ‘he stands on the same Bible we do’.

I guess the reason I recall his claim so clearly is because of the way my mind works.

Since the Catholic Douay Version of the Bible contains the extra books of the Apocrypha, my mind pictured the Pope needing the extra height boost from the thicker Douay Bible.

Anyway, it spawned all kinds of funny and (not-too-spiritual) mental images in my mind, and consequently got stuck in that involuntary but permanent ‘do not delete’ file in my brain.

Recently, a friend emailed me about those extra-canonical books.

“I’m having a discussion on whether or not the Bible really is only the 66 books, on a chat board…But I don’t know a lot about the Catholic Bible nor about these other sources this guy is asking about…Can you help?”

What is the difference between the Books of the Apocrypha in the Douay Version of the Bible and the sixty-six Books that make up Canon of Scriptures?

Further, why are they accepted as equal in authority to accepted Scripture among Catholics, but not among Protestants or evangelicals?

The collection of extra-canonical books are known as the Apocrypha. The term was coined by the fifth-century biblical scholar St. Jerome and refers to the biblical books included as part of the Septuagint (the Greek version of the Old Testament), but not included in the Hebrew Bible.

Several works ranging from the fourth century B.C.E. to New Testament times are considered apocryphal–including Judith, the Wisdom of Solomon, Tobit, Sirach (or Ecclesiasticus), Baruch, First and Second Maccabees, the two Books of Esdras, various additions to the Book of Esther (10:4-10), the Book of Daniel (3:24-90;13;14), and the Prayer of Manasseh.

The apocrypha have been variously included and omitted from bibles over the course of the centuries. The original King James 1611 Version of the Bible included them, although collecting them together as the ‘Books of the Apocrypha’ and placing them in an appendix.

The Apocrypha consists of 15 books of Jewish literature written during the intertestamental period. The Rheims-Douay Version (1582 A.D.) lists 7 additional books, adds to Esther and Daniel, and combines the “Letter of Jeremiah” with “Baruch” — thus including 12 of the 15 apocryphal books to the Old Testament.

In this context, the term “apocrypha” generally refers to writings entirely outside of the biblical canon and not considered inspired (such as the Gospel of Thomas). These same books are referred to by Protestants as the “pseudoepigrapha.”

In other words, it is not the Inspired Word of God, and as such, not part of the collection of works that Timothy says is “given by inspiration of God, and is profitable for doctrine, for reproof, for correction, for instruction in righteousness.” (2nd Timothy 3:16)

The question that most often results from saying the Apocryphal Books are NOT Divinely inspired is, “Oh, yeah? How do you know?”

The best most Christians can do in reply is something like, “Well, they aren’t in MY Bible,” or try and explain that the early Church Fathers rejected them, without really being able to explain why.

Which then has you explaining why you trust the early Church Fathers so much, etc., etc. It can be frustrating, since you don’t REALLY know.

That argument usually collapses when somebody points out that there WERE early Church Fathers who cited them in their writings and listed them as Canonical.

But the most compelling reason why the Books of the Apocrypha were excluded is also the most obvious. They conflict with accepted Scripture. God’s Word does not conflict with itself.

Let’s take a look at some of the legitimate reasons for rejecting the Books of the Apocrypha and see if they hold water on their own merits. First, although Jesus and the Apostles quoted extensively from Old Testament Scripture, not once did they quote from the Apocryphal books.

Ok, maybe that isn’t enough. Reading through them, they lack both the power and the majesty of God’s Word — they just don’t FEEL like Scripture in the spirit, but that isn’t, by itself, that convincing an argument to the skeptic.

“And no marvel; for Satan himself is transformed into an angel of light.” (2 Corinthians 11:14)

But what makes Scripture so powerful is that it is without error. We’ve discussed many times what effect it would have on Judeo-Christianity if somebody conclusively proved that something in the Bible was wrong, historically, scientifically, medically, etc., since the Bible claims its authorship is of God and therefore without error.

If such a claim of fraud could be proved, then the Scripture would lose its authority and would join the ranks of the Book of Mormon, the Koran, the writings of Buddha or Zoroaster and become just another ‘holy book’.

So, if the Apocryphal Books are Divinely inspired, they should pass the same test of inerrancy and be in harmony with the rest of the Revealed Word.

But the Apocrypha contains chronological errors and statements contrary to history, as well as doctrinal teachings that contradict the rest of revealed Scripture.

* Tobit 6-8 teaches the use of magic in demon exorcism.

* Tobit 11 teaches the use of magic in healin.

* Sirach 8:19 teaches the use of magic to obtain good fortune.

* Tobit 12:15 teaches of the intercession of angels (Rafael)

* In the Prayer of Manasseh 8, it teaches of the ‘sinless’ lives of OT personalities.

* Tobit 6:2-7, 16-17 describes ‘miracles’ that can best be described as just plain silly. Unless one believes that placing incense smoke on the organs of a man eating fish can ward off evil spirits.

Or that a demon in love with the woman killed her last seven husbands on their wedding night, etc., lines up with God’s Word as revealed elsewhere in Scripture.

The first question I promised to address was ‘what was the difference between the Canon of Scripture and the Books of the Apocrypha?’.

The difference is that, if one were to include the Books of the Apocrypha, then one could easily prove the Bible was no different than any other holy book, containing great wisdom, but also containing some ‘inconsequential’ errors.

While the other great religions of the world have sacred books, not even Muslim scholars will go so far as to say the Koran is without error and unchanged down through the centuries.

The same can be said of Buddhists, Mormons, JW’s — etc., etc. (One of Islam’s major arguments is that the Jews changed the Old Testament)

As a consequence, these religions also have other authorities of equal weight to their sacred writings. Islam has imams and fatwas that are equal in authority to the Koran and its traditions and interpretations.

Buddhism has the Dalai Lama and Buddhist tradition. Mormons have revised the Book of Mormon dozens of times. The JW’s declared the world ended in 1914 and that Jesus is not God — and they have revised Scriptures to ‘prove’ it.

The Bible is unique. It remains unchanged, its claim of infallibility unchallenged, and its authority unmatched by any other religious sacred book — unless one includes the Apocrypha.

The easily-proved contradictions and historical errors contained in the Apocrypha are part of the reason that, over the years, the Catholic Church has developed its theological view that Vatican teaching and tradition are of equal weight and authority with the Bible.

It is an undeniable fact that those who trust the accepted Canon of Scripture cannot assign it equal authority to the pronouncements of men.

To argue otherwise is to deny all accepted Scripture as false, while defending the historically inaccurate and doctrinally contradictory Apocryphal books as true, since things that are different can never be the same, no matter how convincingly one tries to argue otherwise.

As I said, this is not an attack on the Catholic Church — it is merely an historical explanation of why the Canon doesn’t include the Apocrypha while the Vatican does.

Whenever one attempts to clear the historical record, it is immediately seen by Catholics everywhere as an ‘attack’ on the Catholic Church. It is not.

To those who see it as such, I can only refer you the canonized Scripture, specifically, Proverbs 28:1.

“The wicked flee when no man pursueth: but the righteous are bold as a lion.”

Note: Today’s Letter was originally published back in 2004.

How to be Offensive Without Even Trying

For This They Were Willfully Ignorant…

For This They Were Willfully Ignorant... By Jack Kinsella After searching for half his lifetime,…

Til The ‘Time of the End’

Til The ‘Time of the End’ By Jack Kinsella "But thou, O Daniel, shut up…

Not Even a Goat

Not Even a Goat By Jack Kinsella During His ministry on earth, the scribes and…

Metanoeo By Jack Kinsella The Bible was originally recorded in Hebrew, Aramaic and Greek —…

Was the Earth formed ‘in a day’?

Was the Earth formed ‘in a day’? By Jack Kinsella According to the Bible, in…