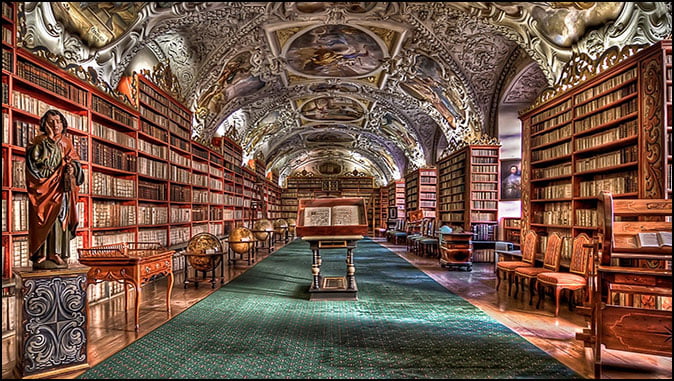 The Books
By Jack Kinsella

“And I saw the dead, small and great, stand before God; and the books were opened: and another book was opened, which is the book of life: and the dead were judged out of those things which were written in the books, according to their works.” (Revelation 20:12)

Allow me to set the stage for the scene just described. We are being given an eyewitness account of the Great White Throne Judgment.

“And I saw a great white throne, and Him that sat on it, from whose face the earth and the heaven fled away; and there was found no place for them.” (Revelation 20:11)

The Great White Throne is the third of the three great judgments outlined by Scripture; the first two being the Believer’s Judgment at the Bema Seat and the judgment of the sheep and goat nations.

The Judge is at all three of these judgments is Jesus Christ. The Great White Throne Judgment is not a New Testament doctrine — the Prophet Daniel described it exactly as John did.

“I beheld till the thrones were cast down, and the Ancient of days did sit, Whose garment was white as snow, and the hair of His head like the pure wool: His throne was like the fiery flame, and His wheels as burning fire. A fiery stream issued and came forth from before Him: thousand thousands ministered unto Him, and ten thousand times ten thousand stood before Him: the judgment was set, and the books were opened.” (Daniel 7:9-10)

Notice another similarity between John’s account and Daniel’s. Both John and Daniel refer to the ‘books’ — plural.

“And whosoever was not found written in the Book of Life was cast into the lake of fire.” (Revelation 20:15)

So the Book of Life is the ticket into heaven. Anyone whose name is not in there will join the antichrist and false prophet in the Lake of Fire.

What are the other books?

There is the Book of Tears. “Thou tellest my wanderings: put Thou my tears into Thy bottle: are they not in Thy book?”

The Book of Tears records our pain and disappointments and sadness — Who we trusted and how we dealt with the trials and tribulations of this life.

“In God have I put my trust: I will not be afraid what man can do unto me…For Thou hast delivered my soul from death: wilt not thou deliver my feet from falling, that I may walk before God in the light of the living?” (Psalms 56:10-11,13)

“Then they that feared the LORD spake often one to another: and the LORD hearkened, and heard it, and a book of remembrance was written before Him for them that feared the LORD, and that thought upon His Name. And they shall be Mine, saith the LORD of hosts, in that day when I make up My jewels; and I will spare them, as a man spareth his own son that serveth him.” (Malachi 3:16-17)

This is where God records that which sometimes man forgets. The Scriptures promise that: “And it shall come to pass, that whosoever shall call on the Name of the Lord shall be saved.” – (Acts 2:21)

My Dad fought with the Canadians during WWII. He once told me he fought in every major theatre of war. Dad was on the first Dieppe Raid in 1940 in which only a third of those who landed on the beach survived.

Dad was among the troops evacuated at Dunkirk at the fall of France. He landed in Sicily and was wounded at the Battle of Monte Casino during the Italian Campaign.

He fought his way across France after the Normandy landing and took great pride in his part in liberating Holland from the Nazis and liberating the Jews from the Vught concentration camp at Westerbork.

My father was raised a Catholic but he was not a religious man. I cling to the hope that at some point during one of those battles, Dad cried out: “Jesus, save me!” If so, then God recorded his plea in the Book of Remembrance and I will see him at the Bema Seat.

The fourth book in which our names are recorded is the Book of Births.

“Thine eyes did see my substance, yet being unperfect; and in Thy Book all my members were written, which in continuance were fashioned, when as yet there was none of them.” (Psalms 139:16)

The Scriptures tell us that our names were written in these books before the foundation of the world.

“According as He hath chosen us in Him before the foundation of the world, that we should be holy and without blame before Him in love:” (Ephesians 1:4)

“The beast that thou sawest was, and is not; and shall ascend out of the bottomless pit, and go into perdition: and they that dwell on the earth shall wonder, whose names were not written in the book of life from the foundation of the world, when they behold the beast that was, and is not, and yet is.” (Revelation 17:8)

God foreordained my birth and my name was therefore recorded in the Book of Births before the foundation of the world. The Book of Tears contains the record of my trials and tribulations and disappointments.

Those that teach temporal security point to the following verse as a proof text because it refers to blotting one’s name out of the Book of Life:

“He that overcometh, the same shall be clothed in white raiment; and I will not blot out His name out of the Book of Life, but I will confess his name before My Father, and before His angels.” (Revelation 3:5)

I believe the Bible teaches that everybody is recorded in all four books; births, remembrance, tears and life.

Babies who die as babies go to heaven, so their names must also be recorded in the Book of Life. Paul says that, while “I was alive without the law once: but when the commandment came, sin revived, and I died.” (Romans 7:9)

If that sin is not covered by the Blood of Christ by the time we leave this earth, then we have not overcome — since we are overcomers only through the imputed righteousness of Christ and not our own righteousness, holiness or ability.

If we are not overcomers through Christ, then are our names blotted out of the Book of Life and “the rest of the dead lived not again until the thousand years were finished. This is the first resurrection.” (Revelation 20:5)

This is a lot to take in at once, so I will try to summarize. The Bible outlines four different books in which our names are recorded and against which we are judged, either at the Bema Seat or the Great White Throne.

God records the day we called out to Him in His Book of Remembrance or He blots our name from the Book of Life if we fail to do so in this life. If our names are still recorded in the Book of Life then we will appear before Christ at the Bema Seat for the believer’s judgment.

We will still be judged based on what is written in those books, but our judgment is to determine our rewards rather than our punishment. Stop with me here for one second. Note again the criteria for appearing before the Bema Seat.

Those who stand before it trusted Jesus rather than themselves. The small and great in Christ will both be there.

Some will receive great rewards, others will receive no reward whatever apart from being permitted entry into the kingdom. “If any man’s work shall be burned, he shall suffer loss: but he himself shall be saved; yet so as by fire.” (1st Corinthians 3:15)

Then there is the Great White Throne. Those who appear before it will be judged for all their works, but they will be sentenced based on just one criteria.

Where their name should appear in the Book of Life — there is an ink blot.

Salvation isn’t difficult. It is what God created us for. Every person who ever lived is (or was once) recorded in all four books.

Whether or not one’s name remains in the Book of Life depends on Who one trusts to keep it there.

“And if it seem evil unto you to serve the LORD, choose you this day whom ye will serve; whether the gods which your fathers served that were on the other side of the flood, or the gods of the Amorites, in whose land ye dwell: but as for me and my house, we will serve the LORD.” (Joshua 24:15)

It seems a no-brainer to me.