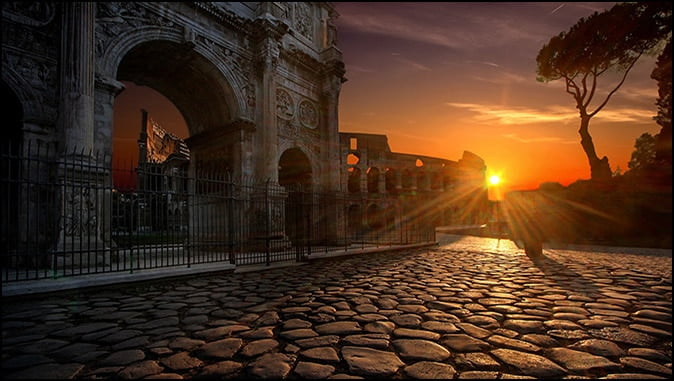 The other day I ran across something I had written back during the First Gulf War. Like everybody else, I was glued to CNN’s coverage of the first Nintendo War. (I even videotaped some of it.)

Anyway, as I was watching the coverage, I was making notes, one of which was the observation that I was witnessing the beginning of a global power shift.

I wrote; “the Soviet Union and America must decrease, so that Europe can rise to pre-eminence.”

I wrote a whole bunch more stuff about how I thought it would come about, but I’m only quoting the stuff I was right about. There was a lot I was wrong about as soon as I left the safe environs of Bible prophecy and started guessing.

For example, back in 1991, I expected the Gulf War to widen and perhaps drag in the Soviet Union against the USA and we’d have an immediate answer to the question, “Where is America in Bible prophecy?”

At the time, the Soviet Union and the United States were both superpowers, whereas the reviving Roman Empire had just been reborn via the Maastricht Treaty, which established a “European Union” and granted EU citizenship to every person who was a citizen of a member state.

EU citizenship enabled people to vote and run for office in local and European Parliament elections in the EU country in which they lived, regardless of their nationality.

The treaty also provided for the introduction of a central banking system and a common currency (the euro), committed members to implementing common foreign and security policies, and called for greater cooperation on various other issues, including the environment, policing, and social policy.

The European Union was the brainchild of six European countries emerging from the ashes of World War Two. In 1948, Belgium, France, Italy, Luxembourg, The Netherlands, and West Germany came together as the Benelux nations, out of which emerged the European Coal and Steel Community.

The Benelux Agreement led to the 1950 Treaty of Paris, and laid out a plan for a European Community to pool the coal and steel of its members in a common market. May 9 is “Europe Day” and commemorates the issuance of the Schuman Declaration, creating the ECSC.

The Schuman Declaration that created the ECSC had several distinct aims:

The ECSC was replaced by the European Economic Community as a consequence of the Treaty of Rome signed in 1957 between the six Benelux nations.

The word “Economic” was deleted from the treaty’s name by the Maastricht Treaty in 1993, and the treaty was repackaged as the Treaty on the functioning of the European Union on the entry into force of the Treaty of Lisbon in 2009.

The essential facts to our discussion at this point are these: The Benelux Economic Union (the “Inner Six”) was created in 1948, becoming the European Economic Community as a consequence of the 1957 Treaty of Rome, which was the basic text upon which both the Maastricht Treaty and Treaty of Lisbon are based.

The Treaty of Lisbon abolished the Western European Union and combined the WEU and EU into a single political entity under the authority of a single High Representative.

The Presidency of the Council, which continues to rotate among Member States every 6 months, has lost influence: the Prime minister of the country in question no longer chairs the European Council, its foreign minister no longer represents the EU externally (that is now done by the High Representative).

Currently, the European Union consists of twenty-seven member states. But until the WEU was abolished by the Lisbon Treaty, only the ten permanent members, Belgium, France, Germany, Greece, Italy, Luxembourg, Netherlands, Portugal, Spain and the UK had full voting rights.

And while the WEU has been absorbed by the EU, the original ten members of the Modified Brussels Treaty still hold most of the power in the EU.

My observation that Europe must ascend to superpower status was rooting in Daniel’s prophecy that says in the last days, the antichrist will rule over a revived form of the Roman Empire.

Twenty-five centuries ago, the Hebrew prophet Daniel, living in exile in Babylon, had a vision for the last days. The revealing angel told Daniel:

“Now I am come to make thee understand what shall befall thy people in the latter days: for yet the vision is for many days.” (Daniel 10:14)

The angel told Daniel of the final Gentile kingdom that would rule during the final hours before the return of Christ. According to the angel, it would be partly strong and partly weak and would consist of ten ‘kings’.

It is clear that the only legitimate candidate for a revived Roman Empire is Europe. Daniel pictured it as consisting of ten ‘kings’, partly strong and partly weak, who would rule Europe militarily, and by extension, the western world.

So where are we today? The Soviet Union collapsed under the weight of its own debt on Christmas Day, 1991. The future of the United States is, for the first time since the Civil War, in serious doubt.

The twenty-seven member European Union’s economy is in free-fall, and the future of the Euro is in doubt.

Of the original ten, three are in danger of being forced out of the Eurozone (Portugal, Ireland, Spain) in order to keep the euro (and the expanded EU) from collapsing.

According to the Prophet Daniel, an eleventh national leader will arise and will salvage the collapsing system by booting three of them out of the federation.

“I considered the horns, and, behold, there came up among them another little horn, before whom there were three of the first horns plucked up by the roots: and, behold, in this horn were eyes like the eyes of man, and a mouth speaking great things.” (Daniel 7:8)

According to the Book of Revelation, one of the chief levers of control used by the antichrist’s government is its detailed control of the economy, to the degree that the antichrist will be able to restrict all buying and selling to those that accept his Mark.

Now, to the eleventh power, the “little horn” with the “mouth speaking great things” — who is he? In context, he is the antichrist. Where does he come from? He arises from outside the original ten.

That is the reason that we focus so much attention on politics during the political seasons. The antichrist is a politician. He is probably alive today. We can already see his shadow on the horizon. And we know what it means.

“And when these things begin to come to pass, then look up, and lift up your heads; for your redemption draweth nigh.” (Luke 21:28)

“And then shall that Wicked be revealed, whom the Lord shall consume with the spirit of his mouth, and shall destroy with the brightness of His coming:” (2 Thessalonians 2:8)

We’re almost home. Hang in there.