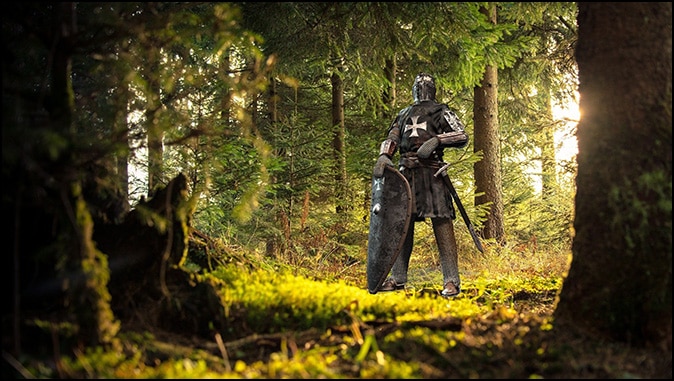 The Armor of God
By Jack Kinsella

Study to shew thyself approved unto God, a workman that needeth not to be ashamed, rightly dividing the word of truth. (2nd Timothy 2:15)

Recently, I received an email from a friend who continues to struggle in the battle between the flesh and the spirit, despairing of the fact that he is convinced he is losing the fight.

My friend and I have been corresponding for years and I am certain of his sincere desire to be saved, but as he noted in his email, I’ve never bought into the doctrine of once saved, always saved. Consequently, my friend is only certain of his salvation when the enemy is taking the day off.

Let the enemy unleash an attack, my friend falls (as do we all) and now he has to start all over again what he calls a re-re-birth. In the meantime, until he is able to get himself back under control, he believes he has lost his salvation and is useless to God.

The Apostle Paul admonishes believers to put on the whole armor of God for the expressed purpose; that ye may be able to stand against the wiles of the devil. (Ephesians 6:11)

The purpose of that armor is SO important that Paul restates it in verse 13, saying, Wherefore take unto you the whole armour of God, that ye may be able to withstand in the evil day, and having done all, to stand.

Stand therefore, having your loins girt about with truth, and having on the breastplate of righteousness; And your feet shod with the preparation of the gospel of peace; Above all, taking the shield of faith, wherewith ye shall be able to quench all the fiery darts of the wicked. And take the helmet of salvation, and the sword of the Spirit, which is the word of God: (Ephesians 6:14-17)

Let’s look at each component a little more closely:

First, the truth. Note the anatomical analogy Paul uses. In battle, that is an extremely vulnerable target. Strike a serious blow there, and the victim is rendered helpless.

Secondly, the breastplate of righteousness. The torso is the biggest and easiest target to strike, but it is also the easiest to armor. If one is covered by the righteousness of Christ, the heart is protected.

Thirdly, the feet. A battle tactic commonly employed in Paul’s day was to sow the battlefield with nails and other sharp objects. Foot soldiers with injured feet are not very effective. If one is fully prepared (shod) with the Gospel, one can engage the enemy uncrippled.

Fourth, Paul says, Above all, taking the shield of faith, wherewith ye shall be able to quench all the fiery darts of the wicked. (v16) If one is certain of his standing before God, the enemy’s whispering campaign falls on deaf ears.

Finally, Paul says to, take the helmet of salvation, and the Sword of the Spirit, which is the Word of God:

The helmet of salvation. In battle, the most effective way to take an enemy out is a head shot. If the enemy can convince you that your salvation is in doubt, he has sidelined you as a threat.

Without truth, the righteousness of Christ, knowledge of the Gospel, faith in its promises, and the certain knowledge of your standing before Christ, the Christian’s only offensive weapon; the sword of the Spirit, which is the Word of God is not very effective.

Above all, Paul writes, is the shield of faith. Without faith, one can never be certain of one’s salvation. And just how effectively can the unsaved communicate the truth of the Gospel — or wield the Sword of the Spirit, which is the Word of God?

The only weapon the enemy can deploy against a Christian is doubt. The question can’t be examined often enough what good is the Word of God in the hands of the unsaved?

The Scriptures say, For the preaching of the Cross is to them that perish foolishness; (1 Corinthians 1:18) and,…the natural man receiveth not the things of the Spirit of God: for they are foolishness unto him: neither can he know them, because they are spiritually discerned. (1 Corinthians 2:14)

Can a person who is once saved, become a natural (unsaved) person again through sin? Having been once saved, does the preaching of the Cross become foolishness to the Christian who has sinned his way out of fellowship with God?

If the Word of God doesn’t become ‘foolishness’ to the lost sinner (and the Bible clearly says it does), then why is it that the once-saved sinner now out of fellowship stills knows enough to ask God to save him again? How can a sinner out of fellowship with God discern the spiritual need to be saved (again)?

The person who has sinned themselves out of salvation cannot, of his own volition, return to the Throne and ask to be saved a second time.

A Pentecostal preacher that I know once told cited Hebrews 6:4-6 as his proof text that people CAN fall away to the extent they can lose their salvation.

For it is impossible for those who were once enlightened, and have tasted of the heavenly gift, and were made partakers of the Holy Ghost, And have tasted the good word of God, and the powers of the world to come, If they shall fall away, to renew them again unto repentance; seeing they crucify to themselves the Son of God afresh, and put Him to an open shame.

It proves exactly the opposite. If his proof text means one can lose one’s salvation, then it also means that, once lost, they are forever lost and have NO HOPE of being re-saved — unless there is another way of interpreting the word impossible .

Opponents of the doctrine of eternal security sometimes deride it the ‘doctrine of demons’. Logic says exactly the opposite.

Why would ‘demons’ promote a doctrine that renders the Christian invulnerable in battle, rather than the one that guarantees the Christian’s defeat — since all Christians sin?

Do YOU know anybody that has never sinned since being saved — not even once? What about YOU?

Then, there is the problem with the logic behind conditional salvation.

If a Christian can sin his way out of being saved, which sin is it? (I’ll only have to avoid THAT one)

If it isn’t one sin, but a preponderance of sins, how many sins constitute a ‘preponderance’? (So I can stay under the limit)

And, having sinned oneself out of salvation, how does one get around the problem of “crucify[ing] to themselves the Son of God afresh, and put[ing] Him to an open shame?

But the bottom line is this: If eternal security is a false doctrine, then we are defeated, and even Jesus can’t save us from ourselves.

And THAT, my friends, would be the ‘doctrine of demons’ in a nutshell.

When There Is No Law

First, Nothing Became Everything

First, Nothing Became Everything... By Jack Kinsella The other day I was chatting with the…

Tribulation Saints and ‘The Mark’

Signs, Signs, Everywhere Are Signs By Jack Kinsella According to biologist Aubrey de Grey, the…

Then You MIGHT be the Antichrist By Jack Kinsella It seems that everywhere one turns,…

The Musterion of Anomia