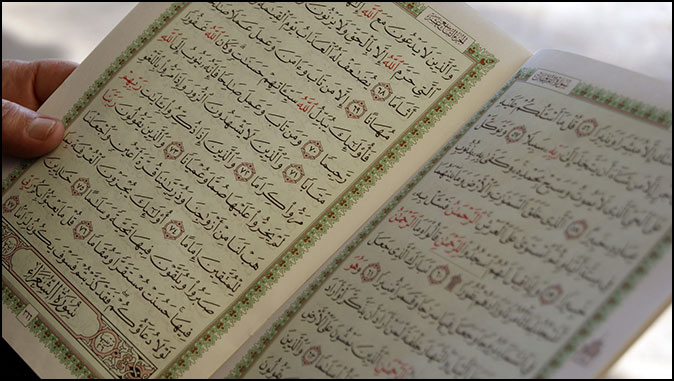 I received an email from someone taking me to task for not recognizing that Muslims love Jesus, in fact, they have more reverence of Him than we Christians.

So is he right? Is there a Muslim Jesus? Does Islam reverence Jesus? If they reverence Jesus, why would they declare jihad against Christians and Jews?

First off, one needs to understand how Islam sees itself relative to Judaism and Christianity.

History traces Islam to its birth in 622 AD in the Arabian city of Medina. But Islam traces itself back to Abraham.

Consequently, it regards itself as the primordial religion from which sprang both Judaism and Christianity.

O followers of the Book! why do you dispute about Ibrahim, [Abraham] when the Taurat [Torah] and the Injeel [Gospel] were not revealed till after him; do you not then understand? Behold! you are they who disputed about that of which you had knowledge; why then do you dispute about that of which you have no knowledge? And Allah knows while you do not know. Ibrahim was not a Jew nor a Christian but he was (an) upright (man), a Muslim, and he was not one of the polytheists. – (The Koran, Sura 3.65-67)

The Koran teaches that the first Muslim was Abraham. As a consequence, it is Muslims, and not Christians or Jews, who are the true representatives of the faith of Abraham to the world today.

There are two main sources for Isa, the Muslim Jesus. The Koran gives a history of his life, whilst the Hadith collections recollections of Muhammad’s words and deeds establish his place in the Muslim understanding of the future.

Jesus true name, according to the Koran, was Isa. His message was pure Islam, surrender to Allah. (Sura 3:83-84) Like all the Muslim prophets before him, and like Muhammad after him, Isa was a lawgiver, and Christians should submit to his law. (Sura 3:50; 5:48)

Isa’s original disciples were also true Muslims, for they said We believe. Bear witness that we have surrendered. We are Muslims. (Sura 5:111)

The Koran also declares the Bible to be a true revelation of God and demands faith in the Bible. O children of Israel! call to mind My favor which I bestowed on you and be faithful to (your) covenant with Me, I will fulfill (My) covenant with you; and of Me, Me alone, should you be afraid. And believe in what I have revealed, verifying that which is with you, and be not the first to deny it, neither take a mean price in exchange for My communications; and Me, Me alone should you fear. Sura 2:40,41

Yet the Koran claims the mother of Jesus was the sister of Moses, and the foster child of John the Baptist’s father Zachariah. For this to be possible, not only would the Bible have to be wrong, but Mary would have to have been more than a thousand years old at Jesus birth.

In 1064, Ibn-Khazem discovered these inherent contradictions. (It took more than 400 years before anybody caught it) Believing, by faith that the Koran was true, the only remaining conclusion is that the Bible must be false.

How can one be true, the other false, and still be obedient to Allah? Easy.

Ibn-Khazem reasoned, “Since the Koran must be true it must be the conflicting Gospel texts that are false. But Muhammad tells us to respect the Gospel. Therefore, the present text must have been falsified by the Christians after the time of Muhammad.” His argument was not based on any evidence or historical facts but only on his personal faith, reasoning and desire to safeguard the Koran.

This led him to teach that, “The Christians lost the revealed Gospel except for a few traces which God has left intact as argument against them.”

Aha! So that’s how it happened. The Koran draws the same conclusion about the Old Testament. The Jews tampered with their own Scriptures to conceal the fact it was Ishmael that Allah gave the Promise to, and not Isaac, as the forged Scriptures now say.

Although Christians believe Isa died on a cross, and Jews claim they killed him, in reality he was not killed or crucified, and those who said he was crucified lied (Sura 4:157).

Isa did not die, but ascended to Allah. (Sura 4:158) On the day of Resurrection Isa himself will be a witness against Jews and Christians for believing in his death. (Sura 4:159)

Muhammad came bringing the Koran to correct the ignorance of the Christians and Jews. (Sura 98:1). Muhammad was Allah’s gift to Christians. They should accept Muhammad as Allah’s Messenger, and the Koran as his final revelation. (Sura 5:15; 57:28; 4:47) True Christians will not love Muhammad’s enemies. (Sura 58:22)

In other words, anyone who opposes Muhammad is not a true Christian.

Muslims should not take Christians or Jews for friends. (Sura 5:51) They must fight against Christians and Jews who refuse Islam until they surrender, pay the poll-tax and are humiliated. (Sura 9:29) To this may be added hundreds of Koranic verses on the subject of jihad in the path of Allah, as well as the Book of Jihad found in all Hadith collections.

The Muslim Jesus comes back at the end of the world to destroy Christianity. The prophet Isa will have an important role in the end times, establishing Islam and making war until he destroys all religions save Islam. He will break the cross, kill pigs, and abolish the poll-tax. Allah will destroy all religions except Islam. He (Isa) will destroy the Evil One and will live on the earth for forty years and then he will die. (Sunan Abu Dawud, Book 37: 4310)

Jesus will break the cross, kill the pigs (only Christians eat pork) and abolish the poll tax a reference to jihad.

According to the Koran, the book revealed to Isa was the Injil. The word Injil is a corrupted form of the Greek euanggelion good news or gospel.

The term euanggelion later came to be used as a title for the four biographies of Jesus written by Matthew, Mark, Luke and John, the gospels. Apparently this is where Muhammad got his mistaken idea of the Injil being a book.

The Koran claims the Psalms are a single book given by Allah to reveal Islam, not a collection of Jewish songs of worship written by several different writers.

In the Bible Haman is the minister of Ahasuerus in Media and Persia (Esther 3:1-2). Yet the Koran places him over a thousand years earlier, as a minister of Pharoah in Egypt.

The Koran claims that Christians believe in three Gods Father, son Jesus and mother Mary. The Koran is equally inaccurate in its claim that Jews say Ezra was a son of God. (Sura 9:30)

The Koran has a Samaritan making the golden calf, which was worshipped by the Israelites in the wilderness (Sura 20:85) during the Exodus. The Samaritans did not exist until several centuries later. They were descendants of the northern Israelites centuries after the Exodus.

The story of Jesus being born under a palm tree is also based on a late fable, as is the story of Jesus making clay birds come alive. Everything the Koran says about the life of Jesus which is not found in the Bible can be traced to fables composed more than a hundred years after Jesus death.

Allah was the name of a pagan god worshipped by the Arabs of Mecca until Muhammed came along. Muhammed’s father’s name meant slave of Allah.

The Muslim Jesus is not God, but a wise teacher and a prophet. That’s why Islam can’t allow Him to have been crucified. If Jesus claimed to be God and was subsequently crucified rather than deny it, then He would not be a wise teacher or a prophet. He’d be a liar and a blasphemer. So instead, the Koran denies the crucifixion. All this hundreds of years after the fact.

Islam may reverence Isa, but Isa is not the Jesus of the Gospel. And Allah is not the God of the Bible. Islam is NOT a ‘religion of peace’ that is simply another way to come to God, as is asserted by the Bush administration. Anymore than the Koran’s Isa is the Bible’s Jesus.

Things that are different are NOT the same. That’s just the way it is.

Lord or Lunatic? By Jack Kinsella One of the most confusing claims I’ve heard repeated…

A Pretext in Context

The Politics of Religion

The Red vs The Blue

The Red vs The Blue By Jack Kinsella One hundred and fifty years ago, the…

Flashback: The War For Eurabia

Flashback: The War For Eurabia By Jack Kinsella “Is Paris burning?” was a question that…