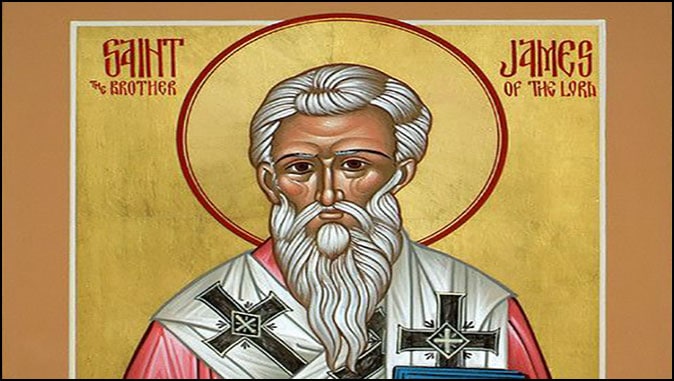 James, Son of Joseph, Brother of Jesus
By Jack Kinsella

One of the most widely used arguments among the skeptics — the absence of archeological evidence of the existence of Jesus Christ of Nazareth, was demolished by the recently revealed discovery of the ossuary of James the Just.

James the Just was the writer of the Book of James, the half-brother of Jesus. The first century Jewish historian Josephus recorded that “the brother of Jesus the so-called Christ, James by name,” was stoned to death as a Jewish heretic in A.D. 62.

If his bones were placed in an ossuary the inscription would have occurred the following year, around A.D. 63.

Flavius Josephus was a Jewish Pharisee who surrendered to the Romans and became the official historian to Titus. He was an eyewitness to the the events he recorded, including the Destruction of Jerusalem and the seige of Masada. His ‘War of the Jews’ is one of the most complete extra-Biblical accounts of 1st century Jerusalem.

An ossuary is a small box in which the bones of the deceased are kept. A year after a person’s burial in a tomb, family members would collect the bones into an ossuary. It was a ritual driven by necessity: Tombs, which were often carved into rocks, were expensive and thus were reused.

As we entered the 20th century, Jesus was considered a dubious history figure Whose existence was attested to only by Scripture and by His followers.

It was at this same time that the so-called ‘Enlightened Thinkers’ began questioning the historical Jesus, instead suggesting He was a mythical composite of several Jewish leaders. A good philosophy, but not necessarily based on an actual historical figure.

In 1962, a plaque was discovered in Caesarea Phillipi dedicating a colliseum to Pontius Pilate. Prior to that discovery, the skeptics said the absence of archeological evidence of his procurate in Judea proved the New Testament story was a myth.

As Donald Rumsfeld is fond of observing, “absence of evidence is not evidence of absence”.

In 1990, the ossuary of high priest Caiaphas ben Joseph, who presided over the trial of Jesus, was discovered in Jerusalem. Until that discovery, there had been no independent archeological discovery of any individual personage mentioned by the New Testament.

Peter’s house in Capernaum had been discovered in 1906 and confirmed in the 1980’s, but left room for debate.

The discovery of Caiaphas ben Joseph’s ossuary established — for the first time — that such a historical personage actually lived and artifacts in the box indicated he died sometime after AD 37.

The ossuary’s discovery was announced in the Biblical Archeological Review (BAR). It is important to note that the BAR is a Jewish secular organization. They do not take a position of Biblical inerrancy. And being Jews – secular or otherwise — they have nothing to gain by proving the existence of Jesus of Nazareth.

Proving the existence of a historical Jesus creates huge problems for Jewish tradition regarding Jesus and Christianity in general.

And huge problems for the Vatican and Marian theology, as we’ll see shortly.

The article’s author, a well-known epigrapher from the Sorbonne in Paris, scrutinized this ossuary carefully.

Scans by electron microscopes show no trace of modern tools and full evidence of layers of a patina that could have developed only over many centuries.

The inscription’s grammar and script also appear to fit normal usage in the decades leading up to the Roman destruction of Jerusalem in AD 70.

Then there’s the question of whether the inscription refers to Jesus of Nazareth.

The three names it mentions are as common as Jim, Jack, and John today. The author turned to statistical probability. Of the 40,000 men living in Jerusalem at the time, he figures about 20 people could fit the description “Ya’akov bar Yosef akhui diYeshua” or, “James, son of Joseph, brother of Jesus.”

But the mention of a brother is highly unusual on ossuaries. This could hint that the Jesus mentioned here is particularly famous.

There was only one really famous Jesus in the first half of the first century in a city the size of Jerusalem.

“Is not this the carpenter’s son? is not his mother called Mary? and his brethren, James, and Joses, and Simon, and Judas? And his sisters, are they not all with us? ” (Matthew 13:55-56)

The discovery of the ossuary proves the existence of Jesus Christ with more archeological certainty than there is for Plato, Aristotle, Nebuchadnezzar or Alexander the Great.

Already the skeptics are descending on the discovery, desperately seeking some way to discredit the discovery. Not the least of whom is the Vatican.

It also proves that Jesus was not an only child and that Mary was NOT a perpetural virgin who, after living a sinless life, was assumed into heaven bodily where she reigns as Queen of Heaven.

Which is what Catholic dogma about Mary teaches.

The Vatican explained away Matthew 13:55-56 by saying ‘brethren’ really meant ‘cousins’ and ‘sisters’ was a generic term.

The ossuary’s reference to ‘James, son of Joseph, brother of Jesus’ could signal a coming split at the Vatican between the Marian theologians and Marian worship and worshippers of Jesus.

(Creating a kind off off-shoot religion ‘with two horns like a lamb but the voice of a dragon, maybe?)

In any case, one can’t dispute the importance of the unveiling of this discovery. The James ossuary may be the most important find in the history of New Testament archaeology, says Hershel Shanks, editor of Biblical Archaeology Review. It has implications not just for scholarship, but for the world s understanding of the Bible.

Our mission at the Omega Letter is to provide you with evidence of the reality of Jesus, the truth of Scripture, and the soon coming of our Lord Jesus Christ. You want evidence? Brothers and sisters, we’ve GOT evidence!

What the skeptics attempt to do with this evidence in the coming weeks should be interesting.

But for us, we have the words of Jesus, brother of James. “Let not your heart be troubled: ye believe in God, believe also in me. In my Father’s house are many mansions: if it were not so, I would have told you. I go to prepare a place for you. And if I go and prepare a place for you, I will come again, and receive you unto myself; that where I am, there ye may be also.” (John 14:1-3)