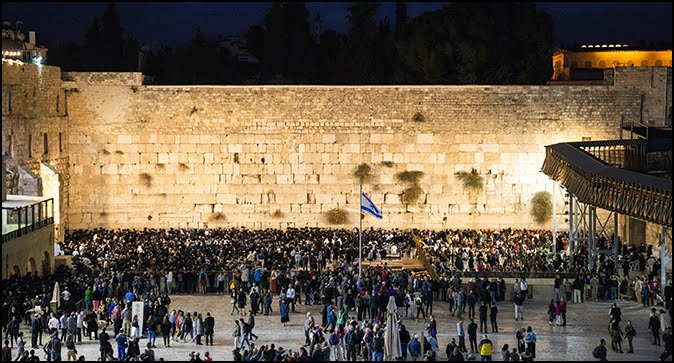 ”Have You Considered the Jew, Majesty?”
By Jack Kinsella

Ever notice that when the word “just” is used before the word “peace”, it is always in support of the Palestinian side? The reason is obvious – at least to me. Israel just wants peace – it knows better than to expect justice.

To Israel, peace is the goal, not justice. If ‘justice’ were the goal, Israel would have rebuilt its Temple in 1967 when it captured the Temple Mount. That would have brought justice, but not peace.

The Palestinians will only accept a ‘just’ peace – according to their own definition of justice. Notice that the ‘just peace’ desired is in ‘Palestine’ – a country that does not exist, and not in Israel, which does. There’s a clue to their agenda in there, somewhere.

Israel’s version of peace means normal trade relations between itself and the other nations in the neighborhood. The Palestinian version of a ‘just peace’ means peace once there is no more Israel to make war with.

When Israel wants to demonstrate Palestinian intransigence, it points to smuggler’s tunnels, weapons caches, rocket attacks against civilian Israeli targets and suicide bombing attacks. None of these make an impression on those who demand from Israel a ‘just’ peace for the Palestinians.

With the whole world scrutinizing Israel’s every move, this outfit managed to uncover the systematic use of chemical weapons by Israel against the Palestinians dating back to 1974. The website includes names, dates, places, and interviews with the ‘victims’ of Israel’s alleged perfidy.

The UN’s Human Rights Council has uniquely made Israel a permanent part of that body’s agenda. They would just love to use this information. (And if even a word of it were true, they would.) There are NGO’s all over Gaza and the West Bank watching Israel’s every move.

There are so many NGO’s operating inside Gaza and the West Bank that the IDF can’t fire a shot without risking hitting a representative of some pro-Palestinian NGO with an agenda as radical as the “Vermonters For a Just Peace In Palestine.”

The acronym NGO is UN –speak for non-governmental organizations recognized by the United Nations. The number of international NGO’s is estimated to exceed 40,000.

So many of these NGO’s are dedicated to Israel’s destruction that there is a website, NGO Monitor, devoted to “promoting critical debate and accountability of human rights NGO’s in the Arab-Israeli conflict.”

For most of the West, our first exposure to the acronym NGO came with the 2001 World Conference Against Racism, Racial Discrimination, Xenophobia and Related Intolerance that was held in Durban, South Africa.

Israel and all pro-Israeli NGO’s were excluded from the Conference with nary a word of condemnation from the other NGO’s attending the conference. An “NGO Forum” was convened which produced a document known as “The NGO Declaration.”

The document, signed and endorsed by NGO’s like Amnesty International and Human Rights Watch and without a hint of irony, accused Israel of using the identical tactics employed against Israel by Hamas and the other Palestinian terror groups:

Article 164 states targeted victims of Israel’s brand of apartheid and ethnic cleansing methods have been in particular children, women and refugees.

Article 425 announces a policy of complete and total isolation of Israel as an apartheid state…the imposition of mandatory and comprehensive sanctions and embargoes, the full cessation of all links (diplomatic, economic, social, aid, military cooperation and training) between all states and Israel.

Article 426 talks of condemnation of those states who are supporting, aiding and abetting the Israeli apartheid state and its perpetration of racist crimes against humanity including ethnic cleansing, acts of genocide.

Since Durban’s NGO Declaration, more than six thousand rockets have been fired into Israeli villages and towns. Those attacks are therefore, ‘aimed in particular’ at Israeli women and children.

The Palestinian side has used children as suicide bombers, has deployed its fighters near schools and refugee shelters, built bomb-making factories in densely-populated civilian areas, with the express purpose of maximizing civilian casualties on its own side for propaganda purposes.

The Palestinian side demands the total removal of all Jewish settlers and settlements from their claimed territory based on ethnicity as the basis for any negotiations.

That is the very definition of “ethnic cleansing.” So where is the outrage? Where are the human rights NGOs? Israeli attempts at cleansing Muslim Arabs from ethnic Jewish areas would qualify as apartheid.

But cleansing Jews from ethnic Arab territory is more like ‘urban renewal.’

Since Durban, every possible violation that could be laid at Israel’s feet has found its way before the Security Council. Every possible relevant authority has conducted its own investigation into Israel’s conduct at every possible turn.

The reams of investigative reports would fill a warehouse with unfounded allegations, even as the investigators openly expressed disappointment at their findings.

Given the scrutiny under which Israel operates, the ‘Vermonters’ allegations about Israel’s use of chemical weapons against the Palestinians is laughable.

But when it comes to accusations against Israel, no charge is too reprehensible.

The German Weekly, Der Speigel reported it obtained photographic evidence showing the bodies of Kurds allegedly killed by chemical weapons used against them by Turkey.

The report claims German experts have examined and confirmed the photographs’ authenticity. German politicians and human rights experts are now demanding an investigation.

But from what I could find this morning, they are about the only ones that are. For the most part, the rest of the world seems unimpressed. It doesn’t really seem like there is a lot of doubt about the truth of the story – the reports I read all seem comfortable with Der Speigel’s vetting of their source.

It’s just that they don’t much care. The reports are there, but they are all pretty much ho-hum. About the only news outlets that saw it as a major news story were the Israelis.

I found it interesting that the first four reports on Google’s news aggregator in response to the keywords “Turkey Chemical Weapons” were the Jpost, Ha’aretz, Arutz Sheva and YnetNews, as if the story were somehow only being reported by the Jews.

The investigative report from Der Speigel that broke the story didn’t even show up when I clicked the link to “all 157 news articles.” Just the same Israeli news sources.

Darned clever the way Google manipulates the news, isn’t it?

The targets of Turkish weapons are Kurdish rebels seeking the creation of an independent Kurdistan on their ancestral homeland, currently part of Turkey, northern Iraq and Iran.

So the Kurds of Northern Iraq that provided so much support to US forces during the Iraq War are the same Kurds gassed by Saddam in the 80’s and now the Turks of today. The only American-based news report I could find was from Fox News – and I had to leave Google’s aggregator to find that.

Clearly, the news reports were manipulated to make it seem as if the chemical weapons report was really Israeli propaganda.

Since Turkey sponsored the blockade-running flotilla, Israeli-Turkish relations have nose-dived. So the willingness of the Turks to use chemical weapons against an enemy is of supreme importance to Israel.

The Turks have long been suspected of using chemical and biological weapons against the Kurdish rebels. But no mainstream news organization has really cared enough to bother finding out. They are only Kurds. Who cares?

Kurdistan is more historically real than Palestine – ethnic Kurdistan is ancient Biblical Nineveh. The Kurds are the ancient Medes of the Medo-Persian Empire that succeeded Babylon. The Kurds have their own unique history, language and culture, independent from that of the nations in which they reside.

The history of the Palestinian Arab ‘people’ begins in the 1960’s when Yasser Arafat invented them.

Israel is not even permitted to erect a fence to protect itself from suicide bombers. It is not permitted to retaliate against unprovoked rocket attacks on its cities and towns. It is internationally condemned as a matter of routine, even when it is the victim.

Recall how nine commandos armed with paintball rifles were savagely beaten aboard the Mara flotilla ship. The video wasn’t doctored – they were swarmed by well-prepared attackers wielding iron bars, clubs, knives and at least two pistols.

International condemnation fell upon Israel. Turkey’s international reputation went up as a consequence of its sponsorship of the flotilla.

Israel was accused of war crimes for returning fire at Hamas fighters who stationed themselves near civilians during Operation Cast Lead. Turkey uses chemical weapons against Iraqi Kurds inside Iraq and the world says nothing.

How can this be? The answer is fairly simple. It can’t be. But it is. There is no explanation in the natural that can account for it. Why would the entire world go off its collective rocker when it comes to Israel but ignore Turkish use of chemical weapons?

Turkey isn’t a miraculous testimony to the faithfulness of the Creator God. Satan didn’t do his best to wipe out the Turks over the course of twenty centuries, only to see them miraculously revive exactly where and when God said they would.

It is Israel that occupies that position as the world’s most hated nation, with America placing only a close second. Israel is God’s oracle, chosen by God to reveal Himself to the nations. Jews wrote the Bible.

When Frederick the Great asked his counselors to provide him with a single evidence of the existence of God, one of them reportedly replied, “Have you considered the Jew, Majesty?”

The persecution of Israel is vicious, premeditated and unconcealed. Nobody denies its existence. The Turks can use chemical weapons without fear of repercussion but Israelis armed with paintball rifles are enough to warrant another UN investigation.

It is often said that one can learn the most about someone by learning who his enemies are. Israel’s greatest enemy is Satan.

I’d say that speaks rather well for Israel.

Note: Today’s submission, originally published August 13, 2010 contains a lot of the back story on what is going on in the Middle East today.