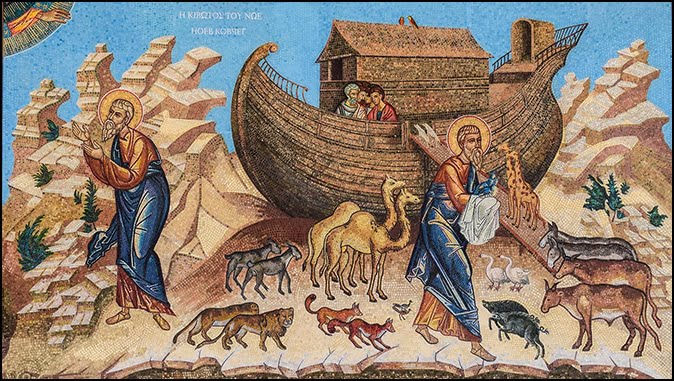 Days of Noah
By Jack Kinsella

When Jesus was asked what signs would precede His coming at the end of the world, He likened the social structure of those days to those of the days of Noah.

Most expositors interpret this verse figuratively; the days of Noe were the earliest days of restored mankind – the beginning of human government and the Times of the Gentiles. The coming of the Son of Man takes place at the conclusion of human government.

In this interpretation, the ‘sign’ is no sign — things will rock on normally, despite the warnings, until the Rapture takes us all away before judgment.

Others see the sign of Noe as meaning that like Noah, the Church will be carried safely through judgment.

God created the angels at some time in eternity past – we know that they were eyewitnesses to creation from the book of Job (38:7)

God’s next sentient (intelligent, self-aware) creation was Adam, the first Gentile. Adam primarily means, ‘a human being’ but its secondary use is to describe a common sort, low, mean, a person of low degree.

Adam essentially means “Basic man” — without any of the frills. All men were Gentiles except for the polluted bloodline of Genesis 6.

“There were giants in the earth in those days; and also after that, when the sons of God came in unto the daughters of men, and they bare children to them, the same became mighty men which were of old, men of renown.”

Genesis 6:4 tells us that there were giants in the earth in those days, and also after that.

These ‘giants’ (nphil-v.“to fall” adj “a bully or a tyrant”, only secondarily a ‘giant’) were born to the daughters of men after the sons of God (ben-Elohim – angels) ‘came into’ (bow – come against, forcibly) them.

These ‘giants’ we’re told, were ‘mighty men (gabor – powerful, tyrannical) which were of old, (owlam, time out of mind, ancient, (almost eternal ) men of renown.’

There is a lot of information packed into this single verse. The first is that they were the product of an unholy, forcible impregnation of the daughters of men.

The second thing we learn is that the “giants” (Nephilim) were spiritually fallen, tyrannical and powerful.

The third is that the offspring of the ‘sons of God” became those which were the ancients from time out of mind, back to the very beginning. Let’s look at that again!

These ‘giants’ became the ancients – one gets a sense of using the daughters of men in some kind of ‘cloning’ operation to ‘manufacture’ physical bodies to be inhabited by ‘the ancients.’

“And God saw that the wickedness (rarah –calamitous, immoral, evil) of man was great (rab abundant, enough) in the earth, and that every imagination (yetser, concept, thing) of the thoughts (machashabah – contrivance, machine) of his heart (leb – mind, will and emotions) was only evil continually (yowm – continually, hot, perpetual).” (Genesis 6:5)

So it was with the wicked and powerful ancients in charge of an increasingly immoral society. Their minds and intellect were focused on evil, their contrivances and machines brought forth evil by design.

“And it repented the LORD that He had made man on the earth, and it grieved Him at His heart.” – Genesis 6:6

He repented?? What does this mean? That the Lord made a mistake? The Lord doesn’t make mistakes. How can this be?

It can’t be. ‘Repented’ (nacham) primarily means, “sighed” – and only by implication or context, means ‘sorry’. It also says it ‘grieved Him at His heart, suggesting remorse.

But God doesn’t feel remorse – God is perfect. It grieved (atsab- to carve, with pain) Him at His Heart – literally, it carved His heart with pain’ at what the man He had made on the earth had become.

Controlled by the wicked and powerful spiritual ancients who shared with them their contrivances and machines which produced only evil by design.

“Watch therefore; for ye know not what hour your Lord doth come.” (Matthew 24:42)

The ‘days of Noe’ was clearly not intended to be taken symbolically or even figuratively – the Lord intended it to be understood literally.

“And knew not until the flood came, and took them all away; so shall also the coming of the Son of man be.”

Most prophecy teachers are disinclined to see this as a picture of the Rapture on the grounds that it proposes a fifty-fifty split between those who are taken and those who are left.

But Jesus doesn’t say that every other person will be taken. Jesus gave two illustrations: one of two guys working in the field, and the other of two women working in the mill.

I’ve seen the Rapture depicted dozens of times in movies, documentaries and so forth – I’ve even been involved in producing a couple of recreations myself.

The pilot disappears, leaving the co-pilot sitting beside him. The mailman disappears as he is handing a lady her mail – his stuff falls to the ground while she stands there staring.

That doesn’t illustrate that only pilots and mailmen will be raptured – the illustration isn’t even those raptured – since they disappeared, what would that illustrate?

The illustration is from the perspective of those who are left behind, not those who are taken. To them, it will look like almost everybody.

If ever there were a time in history that approximates the days of Noah, this is it. Not because we’re eating and drinking and marrying and giving in marriage – that is a sign appropriate to any generation.

The picture in Noah’s day was of Noah giving the warning and the world, mesmerized by the machinery of evil, rejecting the warning, was taken totally by surprise when the rains came.

“But Noah found grace in the eyes of the Lord. Noah was a just man and perfect in his generations, and Noah walked with God.” (Genesis 8-9)

Noah was NOT perfect – he was perfect in his generations, meaning his bloodline was unpolluted. Noah “found grace in the eyes of the Lord’ and Noah walked with God.

Christians are saved by grace, and that not of ourselves, but it is the gift of God. Lest any man should boast [of himself]. (Ephesians 2:8-9)

And because of that unmerited grace, there is therefore no condemnation to them which are in Christ Jesus, that walk not after the flesh, but after the Spirit. (Romans 8:1)

We are not perfect, but our bloodline is unpolluted, washed clean and pure by the Blood of the Lamb through the grace of God. And by virtue of the indwelling Holy Spirit, we “walk with God.”

The imagination of our hearts (movies, TV, etc) is only evil continually. Our intellect creates the machinery of war, the epitome of evil by design.

The signs are everywhere, and there is no shortage of Noahs out there giving the warning. As it was in the days of Noah, so it is today. Noah and his family were ready.

Nobody else was. Until it started raining out of a clear blue sky.

“Therefore be ye also ready: for in such an hour as ye think not the Son of man cometh.” (Matthew 24:44)