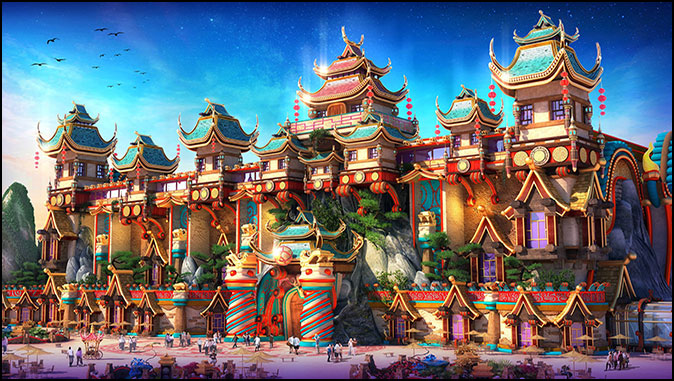 Chinese civilization and culture date back 4,500 years. The Chinese have never been aggressive conquerors of other nations or people; but they have a history of being extremely aggressive in defense of their country and the imperial control of Chinese territory and peoples.

The annexing of Tibet, the military campaigns against India in the 1970s, and intervention in the Korean War in the 1950s, were further manifestations of the Great Wall syndrome dating to 200 B.C. It’s been observed that if you stuck a two by four into the ground in China, the next morning, there’d be a wall around it.

During the 90’s, the Clinton administration tried to 1) recruit China as a strategic ally, but the strategy failed while Chinese agents 2) gleefully looted US national secrets, 3) influenced the US national election of 1996, 4) got a pesky missile guidance problem fixed, 5) arranged to have a laundry list of technology waivers granted; and, then, as soon as a new administration took office, forced down a US plane and took its crew captive.

China doesn’t want a friendship with the West or a strategic alliance with Washington; the 90’s détente was an excuse to plunder the US for fun and profit while learning as much as possible for use in China’s next Great Wall.

China plans an Asian Common Market that would give member countries – including China, preference over countries outside the bloc.

China envisions an Asian Common Market that included the Middle East, the Association of Southeast Asian Nations and South Asia, exclude Japan, suck in South Korea, and in the view of the planners in Beijing, ensure Chinese prosperity at a time of increased tensions with Washington.

To this end, China has been conducting a quiet but persistent diplomacy designed to wean the countries of the region away from their “dependence” on the United States.

Beijing has only been partly successful among the ASEAN states (Association of Southeast Asian Nations). Most of them don’t trust China any more than they do the United States, and in many instances, less.

But the “anti-hegemony” rhetoric of Chinese diplomats has been having an increasing response in the Middle East. There, significant elements of the professional and ruling elites are looking to ways of reducing their exposure in Western financial markets. China presents an attractive alternative.

China’s move toward Iran is not aimed at expanding China’s empire, but instead at widening one of its walls. Beijing sees in Iran the ideal country to replicate its North Korea/Pakistan strategy.

By creating nuclear and missile capabilities artificially in unstable, potentially aggressive neighbors Beijing can divert the attention of the United States to these problem states and away from China.

It’s a policy that has worked for two decades, and has resulted in China being nearly surrounded with a buffer zone of nuclear states friendly only to Beijing. China’s new Nuclear Great Wall.

When the apostles were first beginning to spread the Good News of Jesus into the world, the Holy Spirit instructed them not to preach the word of God in Asia.

“Now when they had gone throughout Phrygia and the region of Galatia, and were forbidden of the Holy Ghost to preach the word in Asia.” (Acts 16:6)

As a consequence, the initial thrust of Christianity as it spread across the earth went toward the west rather than the east. This had profound implications for the future, not the least of which was the fact that Christianity thereafter would be seen as a western institution and be identified closely with western government.

History shows that this has been the course that the message of the Gospel has taken as it has been preached across the world. It started in the Middle East and spread north and west throughout Europe while its eastern course was blocked and thwarted.

Five hundred years ago Columbus brought Christianity to the Western Hemisphere where it began to spread across the American continent. (Jer.25:22). Today it is sweeping across eastern Asia, coming, like the sun, full circle around the globe.

Modern China is home to one of the fastest growing underground church movements in history, as the Word of God continues to follow the path of the sun, from east to west, but the Bible says that the light of truth goes out during the Tribulation period.

John says that the four spirits bound at the Euphrates River will be unbound in the last days, to prepare the way for the kings of the east.

It is from this river that the ‘night’ of Satan bursts its eastern boundaries and move west, proceeding westward from there to take away what light of God yet remains in the west.

The invasion of the West by the forces of the East is one of the most significant events of the last days. From its earliest pages, the Bible has consistently predicted that the final destruction of Babylon will come with the rise to power of the Prince of Persia. (2 Chron.36:20).

The ultimate Prince of Persia is still to come.

At the head of an army greater than any the world has ever seen, this ranting madman from the North will overthrow the power of the western world, and, in his rampage, destroy the entire earth. In that disaster a third of the human race will die in warfare alone. (Rev.9:14).

The army which will inflict this terror on the planet will number 200 million soldiers. (Rev. 9:16). Their battle colors, according to the Bible, will be blue, orange-red and yellow. (Rev. 9:17).

John said that in the van of this army, demon spirits would issue “out of the jaws” of the dragon, calling the entire world to the battlefields that prelude and surround Armageddon. (Rev. 6:13).

China’s ‘one-child’ policy resulted in way more young men than young women, so China’s standing army of 200 million is an army of frustrated and jumpy young men without much hope of a family life apart from the state.

China is extending its reach into Iran, even as it seeks ways to drive the West back over to its side of the Euphrates.

Jesus said, “And when these things BEGIN to come to pass, then look up, and lift up your heads, for your redemption draweth nigh.”

This Letter was written by Jack Kinsella on June 7, 2003.

The Tongues of Men And Angels

Nothing Up My Sleeve

Nothing Up My Sleeve By Jack Kinsella In fiction, when a president takes ‘executive action’…

Some ”Choice” By Jack Kinsella Many Americans defend “choice” by denying that they are ”pro-abortion.”…

A Hell of a Choice

A Hell of a Choice By Jack Kinsella Eternity is a long time, but simply…

The Haters By Jack Kinsella When I was a young man, the idea of Christian…