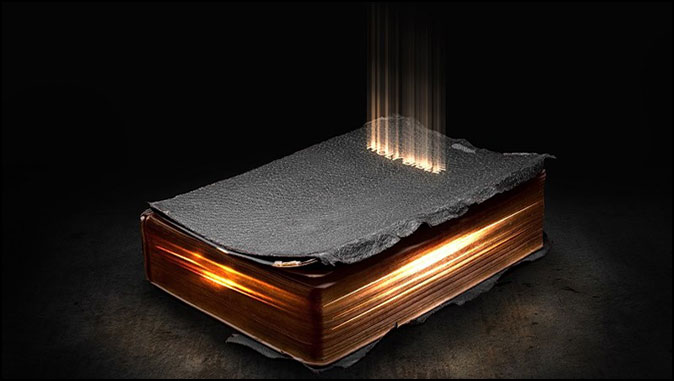 “The secret things belong unto the LORD our God: but those things which are revealed belong unto us and to our children for ever, that we may do all the words of this law.” (Deuteronomy 29:29)

The key to having a basic working knowledge of the Bible is the understanding of Scripture as a series of progressive revelations from God about the things of the Spirit.

There is also a distinct difference between Jewish legalism and salvation by grace through faith.

Understanding WHY the Bible is divided according to Covenant Promise helps us to rightly divide the word, reconciling apparent contradictions like, ‘an eye for an eye’ (Exodus 21:24) vs. ‘turn the other cheek’ (Matthew 5:38-39).

The first three chapters of Genesis reveal that God’s intention in the creation of man was to live in fellowship with Him in the Garden of Eden. Eve was deceived by Satan into sampling the fruit of the forbidden tree. Adam was not deceived, but willfully disobeyed God and followed Eve.

This sin represented the fall of mankind from grace. They were removed from Paradise and through their fall, death entered the world. God shed the blood of animals to cover their nakedness (physical and spiritual) but not until they tried unsuccessfully to cover themselves on their own with fig leaves.

This was the first example of God’s principle of ‘blood atonement’. “For the life of the flesh is in the blood: and I have given it to you upon the altar to make an atonement for your souls: for it is the blood that maketh an atonement for the soul.” (Leviticus 17:11)

“And almost all things are by the law purged with blood; and without shedding of blood is no remission.” (Hebrews 9:22)

After being expelled, Adam’s descendents continued to rebel against God, bringing about the Flood and later, the confusion of speech at the Tower of Babel.

As human history progressed, so did God’s revelation to man. Genesis 12 established the Abrahamic Covenant, in which God revealed His intention to set aside a peculiar people unto Himself, through the seed of Isaac.

Paul summarized the history of the Old Covenant in Acts 13:16-22 before giving the details of the New Covenant between Christ and the Church. Paul stressed that the New Covenant grew out of the Old, that Jesus was of the seed of David, and that, rather than replacing Israel in God’s plan, he likened the Church to Israel as a graft on the original tree.

The Bible reveals that Jesus came first to the children of Israel, but they rejected Him, after which He offered salvation to the Gentiles — not instead of Israel, but in addition TO Israel.

In this present age, salvation is open to all men, Jew and Gentile, through faith in the completed work of Jesus Christ at the Cross.

God has NOT abandoned His promises to Abraham’s descendants. Neither have the promises to Israel been transferred to the Church. “For the gifts and calling of God are without repentance.” (Romans 11:29) Instead, God reveals that “by the works of the law shall no flesh be justified.” (Galatians 2:16)

The Gospel of John details the life, death, burial and resurrection of Jesus Christ. Through John, God reveals the Mystery of the Church, that Jesus was both fully God and fully man, tempted in all manner as we are, as a fulfillment of God’s promise of a Savior.

His earthly ministry was “only to the lost sheep of Israel.” However, about the non-Jewish Gentiles, Jesus said “I have other sheep, not of this pen. I must bring them also.”

BEFORE His blood was shed for forgiveness of our sins, Jesus commanded His disciples to “not go among the Gentiles.”

However, Jesus then explained “But I, when I am lifted up from the earth, will draw all men to Myself.” AFTER He completed His work on the cross, in His resurrected body, the Lord Jesus appeared to the eleven disciples and told them to “go and make disciples of all nations.”

He fulfilled Jewish prophecy and was crucified by both the Jews and Gentiles. Remember, God said it is the blood that makes atonement for one’s life and without the shedding of blood there is no forgiveness. He was buried and was resurrected on the third day, in accordance with the scriptures.

The Book of Romans summarizes the revelation of salvation by grace for all men, based on the equation of faith plus nothing equals salvation.

Paul explains the sin nature, our inability to overcome it by our own works, the principle that if a person lives by the law, he will be judged according to the law. And that such a person is automatically condemned, since no man has ever kept the whole law as required by the Old Covenant.

Indeed, Paul reveals the purpose of the law was to establish our need for a Savior in the first place.

The equation of faith plus nothing equals salvation is an expression of the terms of the New Covenant, which, recognizing man’s inability to keep the law, releases him from its harsh terms.

“Wherefore, my brethren, ye also are become dead to the law by the body of Christ; that ye should be married to another, even to him who is raised from the dead, that we should bring forth fruit unto God.” (Romans 7:2-4)

Understanding that the Old Covenant demanded complete obedience to the Law and demanded blood atonement for its violation reveals how completely hopeless our condition really is. No man can keep all its terms, and breaking the law on even one point calls for the spiritual death penalty.

Having established, through a series of progressive revelations, God’s purpose for man, the consequences of his fall, the futility of the law and the penalty for sin, the Gospel reveals that penalty of blood atonement was satisfied by Jesus Christ.

The final revelation of the New Covenant concerning the Church is the ‘mystery’ of our own resurrection at the Rapture of the Church.

“For if the dead rise not, then is not Christ raised: And if Christ be not raised, your faith is vain; ye are yet in your sins. Then they also which are fallen asleep in Christ are perished.” (1st Corinthians 15:16-18)

When the Bible speaks of something as a ‘mystery’ it refers to something not previously revealed by God.

Paul likens physical death to the planting of a seed. “Thou fool, that which thou sowest is not quickened, except it die.” (1st Corinthians 15:36) Paul goes on to note that what springs forth from the seed as it dies is a new creature.

“Behold, I shew you a mystery; We shall not all sleep, but we shall all be changed, In a moment, in the twinkling of an eye, at the last trump: for the trumpet shall sound, and the dead shall be raised incorruptible, and we shall be changed. For this corruptible must put on incorruption, and this mortal must put on immortality.” (1st Corinthians 15:51-53)

That resurrection, ‘in the twinkling of an eye’ is not limited to those already dead. “For if we believe that Jesus died and rose again, even so them also which sleep in Jesus will God bring with him. For this we say unto you by the word of the Lord, that we which are alive and remain unto the coming of the Lord shall not prevent them which are asleep.” (1st Thessalonians 4:14-15)

Once again, Paul reveals the requirements for salvation. Faith.

If we believe, then we who are alive and remain will ALSO be changed, ‘in a twinkling of an eye’.

“For the Lord Himself shall descend from heaven with a shout, with the voice of the archangel, and with the trump of God: and the dead in Christ shall rise first: Then we which are alive and remain shall be caught up together with them in the clouds, to meet the Lord in the air: and so shall we ever be with the Lord.” (1st Thessalonians 4:16-17)

I know that a lot of this, if not all of it, is review for most of you, but it is important material, nevertheless. The Bible is laid out in a logical progression, line upon line, precept upon precept, with each successive revelation adding purpose and clarity to those which came before.

Misunderstanding the principle of progressive revelation, or ‘dispensationalism,’ removes context from the Scripture, giving rise to all kinds of heresies. Like, for example, replacement theology that says God rejected the Jews after they rejected Jesus.

The Tribulation is the final ‘week’ during which the terms of Abrahamic covenant is fulfilled when Israel enters into its inheritance of the Messianic Kingdom.

The Church plays no role.

God reveals to the Church that, “Ye are of God, little children, and have overcome them: because greater is He that is in you, than he that is in the world.” (1st John 4:4)

However, during the Tribulation, Scripture says of he that is in the world, (the antichrist) “it was given unto him to make war with the saints, and to OVERCOME them…” (Revelation 13:7)

Which is it, then? Are we overcomers during the Church Age, because of He that indwells us now, only to be abandoned by Him and subsequently overcome later by the antichrist during the Tribulation?

How does THAT work? Obviously, it doesn’t.

Instead, the progressive revelation of God says that the purpose of the Tribulation is to fulfill the promise of Daniel 9:24 “upon THY (Daniel’s) people and upon THY holy city, (Jerusalem) to finish the transgression, and to make an end of sins, and to make reconciliation for iniquity, and to bring in everlasting righteousness, and to seal up the vision and prophecy, and to anoint the most Holy.”

All those things were accomplished for the Church at the Cross. “But this Man, after He had offered ONE sacrifice for sins FOREVER, sat down on the right hand of God; From henceforth expecting till His enemies be made His footstool.” (Hebrews 10:12-13)

As a hodgepodge of seemingly conflicting revelations (eg. ‘eye for an eye’) the Bible can be confusing, even misleading, giving rise to all manner of misunderstanding.

Seen as the record of the progressive revelation from God, the Bible presents a harmonious and cohesive outline of human history, past, present and future, devoid of contradictions.

“Study to shew thyself approved unto God, a workman that needeth not to be ashamed, rightly dividing the word of truth. But shun profane and vain babblings: for they will increase unto more ungodliness.” (2nd Timothy 2:15-16)