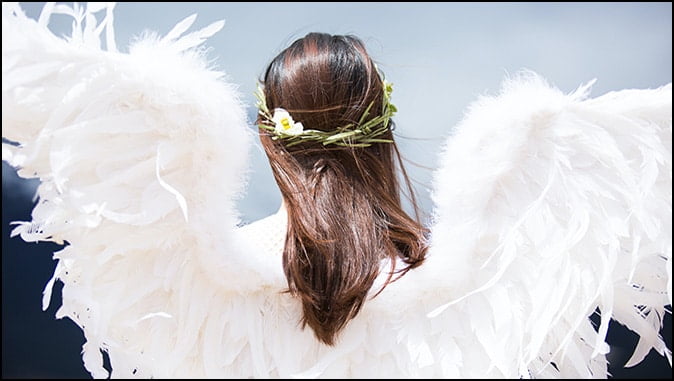 According to the Bible, there are four different classes of created, sentient (self-aware) spiritual beings; Gentiles, Jews, Christians and angels.

Mankind was created in God’s image and God’s likeness but that doesn’t mean that we look like God physically. (We might, but no man hath seen God at any time, who knows?) But spiritually, we are all created with an eternal element — like God, Who is also eternal.

While a man’s body dies, his spirit cannot. The Bible refers to spiritual death, and to the death of the soul, and to the Great White Throne judgment of the Lake of Fire as the “second death” but that doesn’t refer to the end of a soul’s existence.

And hell is a place of fiery torment – He says so…three times!

So, mankind is created in God’s image in that man is an eternal creation. The first man was created a Gentile. Adam didn’t KNOW he was a gentile, because at that time, there were only angels and Gentiles.

Adam fell, and with him, the entire race. Out of Adam’s seed God chose Abraham as the father of two peoples. The descendants of Abraham through Isaac and Jacob He selected as his Chosen People through whom He would reveal Himself to the nations.

If the Jews could have known in advance what they were chosen for, they may well have echoed the old joke about Abe Moskowitz who goes to heaven to meet God.

Spiritually, a Jew is different creation than is a Gentile. The Jew is not a Gentile, neither can a Jew become a Gentile. A Gentile can choose to become a Jew, but not the other way around.

Being a Jew is a choice; one is either chosen, or one chooses, but it involves a choice. But it is a one-way choice. A Jew that lives like a Gentile is a ‘lapsed Jew’, or a ‘secular Jew’, or an ‘unbelieving Jew’– but he cannot become a Gentile – he is a Jew.

The fourth spiritual creation of God is the Christian. The Bible identifies a Christian as a “new creature” — one that is distinct and separate from either a Jew or a Gentile.

A Christian is not a Jew, neither is he a Gentile, but is a new creation of God. A Gentile can be born again, but it is a one-way transformation. Once a born-again Christian, he cannot revert back to being a Gentile – at worst, he is a lapsed Christian.

An ethnic Jew that becomes a Buddhist or a Muslim or a Zoroastrian or a Marxist or an atheist is still a Jew. He is a secular Jew, or a Meshumadim (a heretic) but he remains a Jew, nonetheless.

There is no such thing as a Christian Jew. There are Messianic Jews – that is to say, born-again Jews that have accepted Jesus as Messiah, but they are no longer Jews as far as other Jews are concerned.

From the perspective of Orthodox Judaism, they are worse than heretics.

Angels and angel stories pre-date the oldest Hebrew texts of the Bible. The Sumerians, who pre-date ancient Egyptian society, was the most ancient civilization to depict winged humans in their carvings and statues.

The Sumerians tell the oldest known angel stories of “messengers of the gods” who would intervene between the “gods” and men. Angel stories permeate most ancient primitive cultures. Winged, angelic-like beings can be found within most all of their artwork and lore.

There is a reason why most Gentile cultures also have some form of angelic tradition – they predate Christians and Jews – angels were the first sentient creation of God.

The fact that all cultures have some form of angelic tradition doesn’t cast doubt on the Bible – it enhances the Bible’s credibility. Only the Bible explains where they came from and who they are.

Angels are as real as we are. Angels were interacting with man long before the Bible explained who they were. If angels were an invention of Jews or Christians, then there would be no Gentile angelic tradition.

There are stories of angels in the ancient literature of Babylon, Persia, Greece, as well as references to angel-like spirit-beings within Eastern mystical religions like Buddhism and Hinduism.

Historically speaking, angels exist independently from Christianity or Judaism. Every major religion has its own, unique form of angelic being. What makes them unique, however, is the role they play — all religions tend to describe them the same way.

1. They are more or less universally described as winged creatures of indeterminate sex and of indescribable beauty.
2. They are capable of appearing both as a spirit and in corporeal form.
3. Depending on the religious tradition, they range from being the gentle and benign to that of malignant creatures possessing great powers.

The Bible tasks angels with serving mankind in this life, and then tasks mankind with judging angels in the next:

“Take heed that ye despise not one of these little ones; for I say unto you, That in heaven their angels do always behold the face of My Father which is in heaven.” (Matthew 18:10)

“Know ye not that we shall judge angels? how much more things that pertain to this life?” (1st Corinthians 6:3)

The Bible says that fallen mankind serves a secondary purpose in the instruction of angels;

“Wherefore seeing we also are compassed about with so great a cloud of witnesses, let us lay aside every weight, and the sin which doth so easily beset us, and let us run with patience the race that is set before us.” (Hebrews 12:1)

“Unto whom it was revealed, that not unto themselves, but unto us they did minister the things, which are now reported unto you by them that have preached the gospel unto you with the Holy Ghost sent down from heaven; which things the angels desire to look into. ” (1st Peter 1:12)

In some religious traditions, angels are viewed as gods in their own right — the Romans and Greeks had a pantheon of lesser gods; Mercury, (or Hermes) is depicted by the Greeks as Romans as the ‘winged messenger’ of Jupiter (or Zeus).

But where angels have really hit their stride is within the New Age. People are invited to get in touch with their ‘inner angel’ or their ‘angelic spirit guide’. Some teach we are all angels-in-waiting and that after we die, we become angels.

One hears that all the time, particularly from parents grieving the loss of a child; “She’s God’s little angel, now.”

Almost all religious traditions have some form of angel. They almost all describe the same being. But the Bible is unique in that it explains who and what angels are.

The Bible demonstrates how the angels harmonize with the rest of creation. Angels serve as messengers of God. Our relationship with angels is symbiotic and in harmony with creation.

This tells us three things right off the bat.

So angels are unique. They are what they are and they can’t be anything else because that is the way that God made them.

And that is the one thing that angels have in common with Christians.

Bible Prophecy: A Singing Telegram? By Jack Kinsella According to the online dictionary, post-traumatic stress…

Godly King David? By Jack Kinsella Israel’s King David is the only man in the…