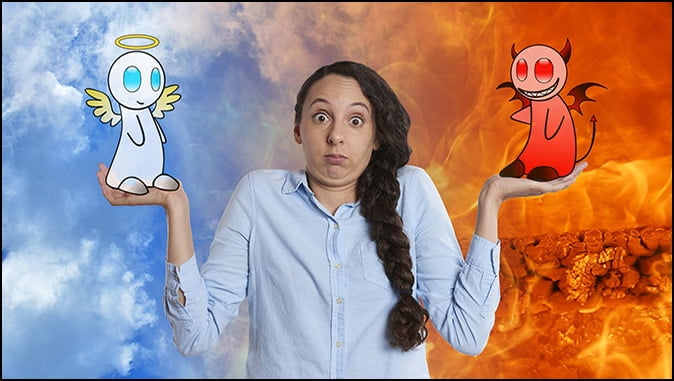 A Hell of a Choice
By Jack Kinsella

Eternity is a long time, but simply saying eternity is ‘a long time’ is like saying a billion dollars is a lot of money. It doesn’t do justice to the topic at hand. It takes a carefully constructed word picture to bring it into focus.

When every grain of sand on every beach on the entire East Coast has been transferred to the West Coast (one grain at a time, every thousand years), that would constitute the first ten seconds of eternity!

Mankind is created in God’s Image, according to Genesis 1:26, and after God’s likeness. But it doesn’t necessarily follow that we look like God, or that God looks like us. Jesus revealed,

God’s ‘image’ and His ‘likeness’ refer to His eternal nature, not His cosmetic appearance. Monkeys look as much like men as any of the other lower order of animals. They look enough like men to argue that, if man is in God’s image, then so are some species of monkeys.

That which is eternal is that which, by definition, cannot die, and cannot be killed. But it can be destroyed.

“And fear not them which kill the body, but are not able to kill the soul: but rather fear Him which is able to destroy both soul and body in hell.” (Matthew 10:28)

Note the subtle shift in Our Lord’s Words when He moves from the temporal to the eternal. The body can die, the soul cannot be killed, but both can be ‘destroyed’ in hell.

There are those who teach that this means that hell isn’t a place of eternal torment, but rather a place where the condemned soul is annihilated. This sounds reasonable enough, given our understanding of a loving God of mercy.

The Bible speaks as much of hell as it does of Heaven; indeed, in His ministry, the Lord spoke MORE of hell than he did of heaven. Scripture divides ‘hell’ — as we understand it — into two phases. There is hell, and then, later on, the Lake of Fire.

“And death and hell were cast into the lake of fire. This is the second death.” (Revelation 20:14)

It is the ‘Lake of Fire’ that some teach is the place of annihilation. I believe that the Scriptures teach otherwise.

We are created with an eternal element, as we’ve already established. That which is eternal cannot be killed, but it can be ‘destroyed’. But ‘destruction’ means eternal separation from God, not annihilation.

Jesus explained in the story of Lazarus and the rich man;

“There WAS a certain rich man, which was clothed in purple and fine linen, and fared sumptuously every day: And there was a certain beggar named Lazarus, which was laid at his gate, full of sores…”

Note that Jesus does NOT say, “learn the parable of the rich man” but rather, tells the story as fact — indicating He is talking about a real rich man and a real beggar. Both of them died, the Lord explains, and each went to his place, Lazarus to Paradise, and the rich man to hell.

At the time of the story, Jesus had not yet redeemed humanity, and the righteous dead went to Paradise, which, the Lord taught, was separated from hell by a great gulf or chasm;

“And beside all this, between us and you there is a great gulf fixed: so that they which would pass from hence to you cannot; neither can they pass to us, that would come from thence.” (Luke 16:26)

At His Death, Jesus ‘descended into hell’ [which also included at that time, Paradise] in order to liberate the righteous dead and take them to heaven;

“Wherefore He saith, When He ascended up on high, He led captivity captive, and gave gifts unto men. (Now that He ascended, what is it but that He also descended first into the lower parts of the earth? He that descended is the same also that ascended up far above all heavens, that He might fill all things.)” (Ephesians 4:8-10)

Once the righteous dead were taken to heaven, hell was expanded to make room. Those in hell will be ‘cast into the Lake of Fire’ at the second death, the Scriptures say.

There are those who will point out that the word ‘hell’ (sheol) has two meanings; it means both ‘the grave’ and the place where departed spirits go. So they argue that hell is not really a literal Bible teaching.

“In flaming fire taking vengeance on them that know not God, and that obey not the gospel of our Lord Jesus Christ: Who shall be punished with everlasting destruction from the presence of the Lord, and from the glory of His power.” (2nd Thessalonians 1:8-9)

Hell is a place of punishment that the Lord described THREE times, using exactly the same words;

When the Lord chooses to repeat Himself, it is because He wants to make sure that we get it right.

Jesus said the rich man was ‘in torments’, desiring that Lazarus “dip the tip of his finger in water, and cool my tongue, for I am tormented in this flame.” (Luke 16:23)

While those in heaven will meet and recognize their loved ones, those in hell will spend eternity like the unidentified rich man, nameless, alone and in utter darkness.

Jesus says of the hellbound sinner that it would be “better for him that a millstone were hanged about his neck, and he were cast into the sea.” (Mark 9:42)

Jesus said of Judas that “woe unto that man by whom the Son of man is betrayed! it had been good for that man if he had not been born.” (Matthew 26:24)

Hell is worse than violent death and worse than having ever been born at all. Jesus’ words make no sense if Judas were facing ‘annihilation’ in hell. How could NOT existing (annihilation) be worse than never existing?

On the other hand, eternal torment would be MUCH worse than never having existed at all. The difference is obvious without having to conduct any special Scriptural gymnastics to prove it.

And if the plain sense of Scripture makes perfect sense on its face, why seek a different sense?

Hell is given over to the Lake of Fire at the second death at the conclusion of the thousand year Millennial Kingdom Age. The beast and the false prophet are cast alive into the Lake of Fire, where, Revelation 20:10 says that “they shall be “tormented day and night for ever and ever’ — not annihilated.

Eternal life and eternal death are two sides of the same coin in that they are BOTH eternal, since we are created in God’s Image, which is an eternal Spirit.

A loving God would provide an escape from eternal condemnation, which is different than expecting Him to change the nature of the punishment.

Hell was created as a prison and place of punishment for the rebellious angels. When man joined in the rebellion, he condemned himself to share their prison. BUT

“God so loved the world, that He gave His only begotten Son, that whosoever believeth in Him should not perish, but have everlasting life.” (John 3:16)

Heaven doesn’t require cream cheese to make it heaven, and there are no red union suits in hell. Both are real and both are eternal because we are eternal and, as eternal beings, we have to continue our existence somewhere.

And He gave us a free choice to decide which we would prefer.

We are the watchmen on the wall. For those of us that know the truth, that choice is an awesome thing to contemplate. It rekindles a sense of urgency for the lost.

The Omega Letter’s mission is to prepare the saved for the work of the ministry by comparing the Scriptures to the signs of the times and providing evidence of the lateness of the hour and the soon coming of the Lord.

Our secondary mission is to examine the deeper truths of Scripture so that we are better prepared to answer the skeptic’s questions and make clear the choices that are set before him.

It is incumbent upon us to be prepared, “and be ready always to give an answer to every man that asketh you a reason of the hope that is in you with meekness and fear:” (1 Peter 3:15)

May God continue to sustain and provide for us as we continue in our mission. Until He comes.

You Were A Baby Once Don’t Be Scared

There’s No Escaping America, Comrade! By Jack Kinsella One of the founders of Facebook, whose…

The ‘Hidden’ Bible By Jack Kinsella From time to time, somebody will email me with…

Things That Are Different Are STILL Not the Same

Going North and South at the Same Time