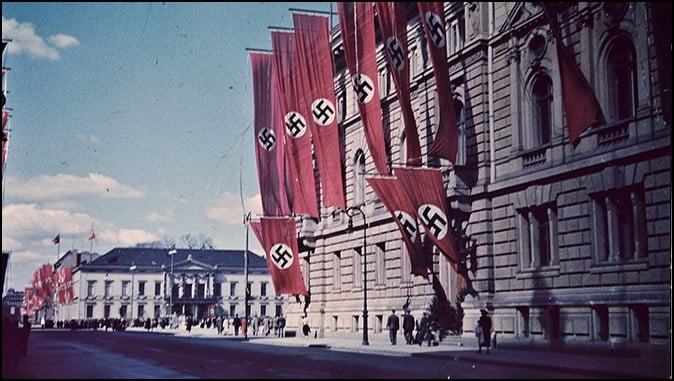 “History does not repeat itself, but it rhymes” – Mark Twain

In 1933, Adolf Hitler was elected Chancellor of Germany. He took office in January, with Fritz Von Papen as vice-Chancellor to keep him in check. Only twenty years earlier the German Kaiser led his people into a disastrous war with the West.

Germans had had enough of the monarchy and the absolute power it had, and demanded the Kaiser’s abdication. Having gotten rid of the Emperor, the new German Republic carefully separated powers between the presidency and the chancellery.

But President Von Hindenburg was 86 years old when Hitler assumed the title of Chancellor of Germany. The timing was perfect.

Hitler’s ascendancy was meteoric. In the early 1920’s, he was little more than a neighborhood organizer. Over time, as hyper-inflation and catastrophic unemployment hit Germany, Hitler’s movement, dubbed ‘national socialism’ grew into a fringe party.

In 1923, leading what he hoped would be a violent overthrow of the Weimar Republic, Hitler leapt to a table in a beer hall in Bavaria and called on a gathering of officials to support him in the march on Munich.

Instead, they arrested him, put him in prison and outlawed the Nazi party. After his release, Hitler set about reorganizing the national socialists as a movement. In 1927, when the government lifted the ban on national socialism, it became a political party. In 1928, the Nazis managed only 3% of the vote.

It wasn’t until 1931 that Hitler began to made inroads within the vast German center-right political monolith still controlled by traditional conservatives like von Hindenberg.

In the 1932 election, thanks to such tactics as voter intimidation, voter registration fraud, voter fraud at the polls, etc. the national socialists managed a solid majority in Parliament.

In January, 1933 and only days after Hitler assumed the chancellorship, there was an explosion followed by a fire in the Parliament building. Hitler declared an emergency and rammed home the 1933 Enabling Act that allowed an emergency suspension of civil rights.

President von Hindenburg died in August, 1934. Within hours of his death, the German parliament issued the following press release:

“The Reich Government has enacted the following law which is hereby promulgated.

Section 2. This law is effective as of the time of the death of Reich President von Hindenburg.”

The law was technically illegal since it violated provisions of the German constitution concerning presidential succession as well as the Enabling Act of 1933 which forbade Hitler from altering the presidency.

But whether or not he was legally eligible to serve didn’t matter much anymore.

Hitler declared himself Fuhrer and ordered a referendum to retroactively confirm it.

So on August 19, Germany, still grieving its beloved war hero and president, went to the polls and confirmed Adolf Hitler as their Fuhrer, an action that only four years earlier would have been unthinkable.

In 1933, Germany was one of the most cultured and honorable nations on earth. German honor was legendary, particularly among German military officers who would rather die than dishonor themselves or their sacred oath of service.

The German culture at the time was such that, despite the World War and its excesses, Germany was THE place for foreign exchange students and was a favored diplomatic posting.

Hitler was widely respected at first for his governing ability. He nationalized much of Germany’s banking system and began pouring money into the German infrastructure.

The first interstate highway system in the world was Adolf Hitler’s Autobahn. The ‘People’s Car’ (Volkswagen in German) was introduced at Hitler’s insistence.

Hitler’s political popularity morphed into a kind of cult worship in which he was styled as the German messiah. (The word ‘fuhrer’ is generally translated ‘leader’ but it is actually closer to the English word ‘lord’.)

Britain’s King Edward had so fallen under Hitler’s spell that it was necessary to force his abdication to prevent England from being ruled by a Nazi sympathizer. (Edward died in exile in 1972)

In 1934, when Adolf Hitler became the supreme leader of Germany, Germany had both a free press and a legally elected parliament.

The German Republic was a functioning, western-style representative democracy. Germany was known for, and disliked because of its excesses, but it was also known for being one of the world’s most honorable countries.

The demands of national socialism required rounding up certain classes of people. Experiments began on efficient ways to euthanize those deemed to be a drain on the German economy or damaging to its culture.

At first, it was baby steps, nationalizing the banks, rounding up firearms, demonizing certain classes of people, etc.

The trick to making it all work is making sure the times are desperate enough to justify the measures being advanced.

Here’s the point. When von Hindenburg died in August 1934, Germany was still one of the most honorable and cultured nations in Europe and everybody from King Edward of England to FDR thought Hitler was the greatest thing since sliced bread.

Only four years later, German Jews were being beaten and killed and their property either destroyed or confiscated during Kristallnacht (The Night of the Broken Glass).

What is the point I am trying to make here? There is no period in history that more perfectly mirrors the current global situation that that of the 1930s — and on almost every scale of measurement; economic, political and spiritual.

One of the truisms of history, which has been observed by everyone from philosopher Georges Santayana to George Bernard Shaw is this: “Those who fail to learn the lessons of history are doomed to repeat it.”

George Bernard Shaw put it this way. “One thing we learn from history is that we learn nothing from history.“

So, what does history teach us? I’m not going to spell it out in words — and that, by itself, should be instructive. Free speech is only free under certain circumstances in this brave, new 21st century world — and my sense of history tells me this isn’t one of them, even in a private letter to subscribing members.

A lot can happen in four years.