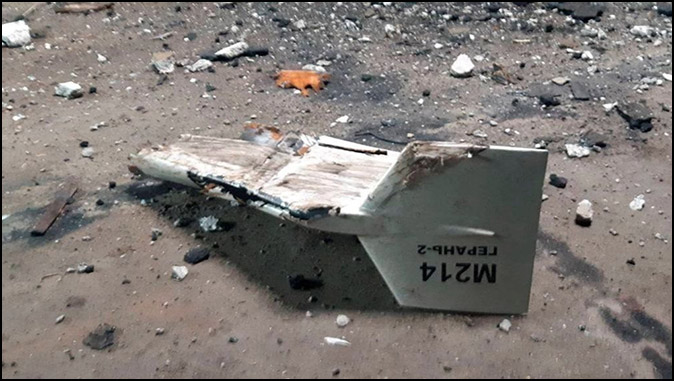 US Must Treat Iran Like Russia
By Con Coughlin

Now that even the Biden administration has been forced to admit defeat in its ill-considered attempts to revive the Iran nuclear deal, it is vital that the West does not let its guard slip on Iran’s malign activities across the globe.

Throughout the year-long negotiating process in Vienna over Iran’s nuclear ambitions, which the Biden administration now concedes have ended in stalemate, Tehran has sought to give the impression that it is interested in negotiating a deal, while at the same time ramping up its aggressive military activities in the Middle East and beyond.

Despite recent claims by European leaders that a new nuclear deal was still possible, Iranian intransigence has effectively ended the negotiations, with US Secretary of State Antony Blinken conceding that the latest demands made by Iran have taken the process “backwards”.

While the failure of the talks represents a major setback for the Biden administration ahead of the upcoming mid-term elections, however, it is vital that the US and its allies confront the reality of Iran’s expanding military operations around the world.

In what amounts to a significant increase in Iranian activity, Ukrainian forces involved in the highly successful offensive to recapture large swathes of territory in northeastern Ukraine claim to have shot down an Iranian-made Shahed-136 drone used by Russia’s armed forces in the region of Kharkiv.

The first reports that Iran had offered to provide Russia with military-grade drones to support its military efforts in Ukraine emerged in July after Russian President Vladimir Putin visited Tehran, where he met with the country’s Supreme Leader, Ayatollah Ali Khamenei. US officials later reported that the first consignment of Iranian drones had been delivered by Russian cargo planes.

While Tehran had denied the reports, Ukraine’s defence ministry posted images of what appeared to be parts of a destroyed drone with “Geran-2” written on the side in Russian. The wingtip appeared to match that of a Shahed-136.

This is, by any standard, amounts to a truly momentous escalation in Iran’s military activities: it is the first time Iranian military equipment has been deployed on European soil.

One of the arguments most frequently advanced by apologists for the Iranian regime is that Iran poses no threat to Europe, and that its military activities are confined to pursuing its goals in the Middle East, including its long-term ambition of destroying Israel.

The fact that evidence has emerged demonstrating that Iran is actively supporting Russia’s unprovoked aggression against Ukraine makes a mockery of this argument.

If Iran is prepared to deploy sophisticated military equipment such as drones on European soil, then it is clear the ayatollahs would have no hesitation about firing their long-range ballistic missiles, potentially armed with nuclear weapons, at European targets.

On one level it is not surprising that two rogue states such as Russia and Iran should seek to increase their military cooperation in their efforts to confront the West. Both regimes are suffering the effects of Western sanctions and find themselves isolated on the international stage.

Nevertheless, Iran’s willingness to become directly involved in the deadliest conflict Europe has witnessed since the end of the Second World War represents a significant escalation in the threat Tehran poses to the outside world, one that Western powers ignore at their peril.

Iran’s increasing involvement in the Ukraine conflict, moreover, needs to be seen within the context of recent increased activity in other military spheres.

Despite Iran’s insistence that it is keen to negotiate a new nuclear deal that limits its ability to acquire weapons-grade nuclear material, Iranian officials last month boasted that they now have the technical capability to produce an atom bomb.

Israeli Defence Minister Benny Gantz, addressing The Jerusalem Post Conference in New York last week, revealed a map showing more than ten facilities that Iran has constructed in Syria in recent years to produce mid- and long-range precision missiles that can be used to target Israel.

This is not the action of a country that, as the Iranians repeatedly insist, is interested in peace, and should serve as a wake-up call to Western leaders to confront Iranian aggression in the same way they have confronted Russia over its decision to invade Ukraine.

The support the US and its allies have provided to Ukraine has been pivotal to Kyiv’s successful resistance to Russia’s attempts to occupy its territory.

The West must now provide the same level of support to all those countries — which now includes Ukraine — that find themselves the targets of unprovoked acts of aggression by Tehran.

One of the most important lessons learned from the 1930s was that what starts in one place, such as Austria or Sudetenland, can almost be guaranteed not to stay in that place.

Con Coughlin is the Telegraph’s Defence and Foreign Affairs Editor and a Shillman Journalism Fellow at Gatestone Institute.