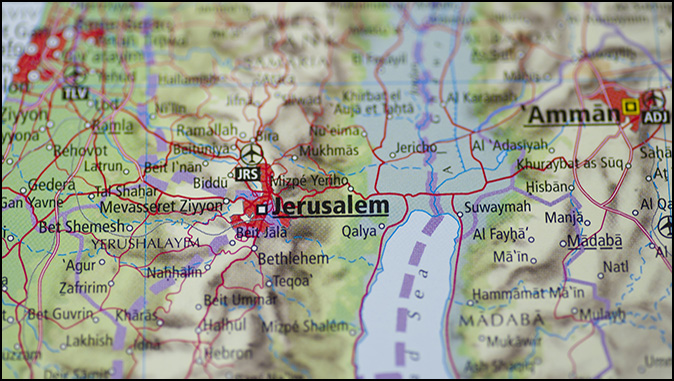 Two-State Solution or Jordan Option?
A clear opportunity for Israeli voters to choose.
By Ted Belman

Joe Biden has come and gone in Israel with little to show for it. But he has, however, left some debris in his wake that will set the stage for Israel’s coming election.

While he reaffirmed his support for the Two-State Solution (TSS), he went on to say “the ground is not right at this moment to restart negotiations,” and: “The two-state solution is still the best way to ensure peace and democracy for Israelis and Palestinians; however, I don’t see a near horizon for this solution.”

Both Prime Minister Yair Lapid and Defense Minister Benny Gantz share that view. Lapid said: ”A two-state solution is a guarantee for a strong, democratic State of Israel with a Jewish majority.”

Meanwhile, Gantz expanded upon this recently with many striking comments at the Aspen Conference in the US. He began by saying: “I think the Abraham Accords can today help strengthen the Palestinian Authority, and build a reality of separation and two entities.”

He continued by stating that “I see this as a Zionist matter and Israel must be a safe, democratic and Jewish state.”

He then made the shocking statement that he was “Happy that I blocked the threat of annexation of Judea and Samaria.” What??

I think he was referring to his practice as Minister of Defense of enabling illegal Arab construction in Area C. As if that weren’t enough, he offered “gestures” which went far further than even the legalization of such construction:

– Approval of the registration of 5,500 stateless persons in the Palestinian Population Registry, in addition to the 12,000 already approved.

– Approval of six master plans for Palestinians in Judea and Samaria – Confirmation of validity in Hizma, Hermela; Permission to settle in Paciks, Hares, Kisan and Tir.

– Increasing the quota of workers from the Gaza Strip who are allowed to enter labor and trade in Israel by an additional 1,500, to a total quota of 15,500.

– Opening of a new crossing – “Salem” – in northern Judea and Samaria, a mounted crossing for the purpose of the entry of Israeli Arabs into the city of Jenin.

Gantz is actively supporting the Fayyad Plan, which the EU is financing and backing politically. The Plan is designed to illegally take over Area C in violation of the Oslo Accords, and so far it is succeeding.

Thus both Lapid and Gantz agree that the Palestinians must be separated from Israel in order for Israel to remain a democratic state with a Jewish majority. Neither of them, however, made even the slightest mention of claiming sovereignty over Judea and Samaria, our biblical heartland. Indeed, their combined silence on this issue clearly demonstrates their complete disinterest in doing so.

Despite this goal of ceding the land to the Arabs, Gantz persists in describing it as a “Zionist matter.” The prospect of this policy is terribly reminiscent of Herzl’s misguided acceptance of the British Uganda Proposal tabled at the Zionist Congress in 1903.

While Herzl made it clear that this program would not affect the ultimate aim of Zionism, a Jewish entity in the Land of Israel, the proposal aroused a storm at the Congress and nearly led to a split in the Zionist movement. The Jewish Territorialist Organization (ITO) was formed as a result of the unification of various groups who had supported Herzl’s Uganda proposals during the period 1903-1905.

In fact, the Left in Israel supported Moshe Dayan’s actions in turning over the Temple Mount to the Arabs after conquering Jerusalem in 1967 for two reasons. The first was that they didn’t want to start a holy war with Islam, which Dayan said would be the result of keeping it, and the second was because they wanted to undermine the role of the Jewish religion in Israel.

After the War of Independence, Israel extended sovereignty over all land conquered beyond the partition lines, pursuant to a law that became known as Ben Gurion’s Law. Unfortunately, she declined to do so over all lands conquered in the ’67 War. The reason it wasn’t done is because the Leftist government didn’t want to contend with the Arabs living in said lands, and didn’t look upon it as our biblical heartland. As a result, UNSC Resolution 242 was passed.

Today, the Center/Left supports ridding Israel of Judea and Samaria for the same reason. They prefer Israel to be a state of all its citizens, rather than the nation state of the Jews.

In summary, the Left wants to diminish the role of religion in Israel, and they want to separate from the Palestinians.

Israel’s troubles started in earnest with the signing of the Oslo Accords (1993 and 1995), which was negotiated and approved by the Center/Left Government with a one-seat majority. The worst part of the Oslo Accords was that Israel was required to invite Arafat and 50,000 of his fellow terrorists into Israel. They became the bane of Israel’s existence.

The second colossal mistake was disengaging from Gaza in 2005. That action was also promoted by the Center/Left. As a result, we have been subjected to four inconclusive wars with Gaza.

Within a year, he became Prime Minister and said: “We want them to be our friends, our partners, our good neighbors. And I believe that is not impossible.” And: “Peace is achieved through concessions. We all know that.” Do we? What about “peace through strength”?

Does he still believe “it’s not impossible”? Do Gantz and Lapid believe that?

Why does the Center/Left still promote the TSS? Why do they refuse to learn from the past? Why do they ignore that the Charters of both the PLO and Hamas call for the destruction of the State of Israel? Surely they know that the TSS is a fantasy and will never come to be.

Caroline Glick in 2014 published The Israeli Solution: A One-State Plan for Peace in the Middle East. In it, she proposed that Israel annex all the land west of the Jordan River with the exception of Gaza, and offered a path to citizenship to the Arabs.

This was more palatable to the Right, as it kept Judea and Samaria for Israel without endangering the Jewish majority. But the Center/Left rejected it, because they wanted separation from the Palestinians.

This proposed enlarged kingdom would include present-day Jordan, Gaza, and the West Bank (areas populated by Palestinians attached in a contiguous manner and physically connected to Jordan.

This was a far cry from the 2002 Arab Peace Initiative of the Arab League led by Saudi Arabia.

No doubt Gantz and Lapid would love it. If there were no alternative, some on the right in Israel might also find it better than the status quo.

But there is an alternative known as the Jordan Option, which will soon become operational.

It incorporates the same rational as does Ali Shahabi’s plan, but differs from it in two key respects: namely where the Western border will be, and whether the new entity is a kingdom or a republic.

The Jordan Option requires Jordan to be a republic, with the Jordan River as its western border.

My article How the Jordan Option will impact Israel explains it in detail.

Both the Left and Right in Israel will love it, and so will the Palestinians, for the most part.

I predict that the Right will promote the Jordan Option during the coming election. Consequently, the resulting contest between the TSS fantasy and the Jordan Option will present the voters with a clear opportunity to choose whether they should continue to tie their fate to the failures of the past, one more time, or to pursue this new option, the Jordan Option, with the new Jordanian Republic.

As a result, the Right will win a strong majority of seats and an earnest path towards peace for the Arabs and the Jews alike.