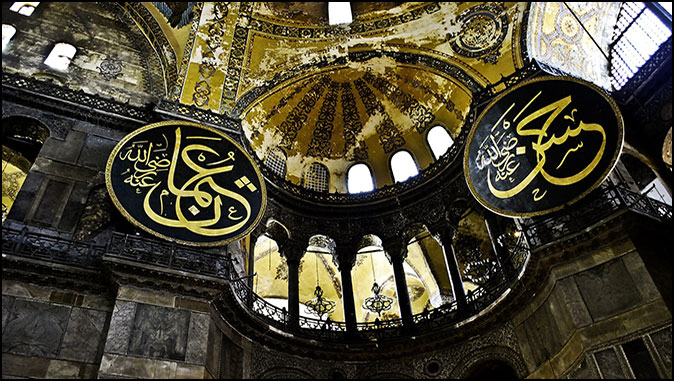 Turkey’s New Mosque a Monument to Western Decline
We may think we’re exhibiting high-minded principles, but our enemies know the score.
By Bruce Thornton

Last week Turkey’s president Recep Tayyip Erdoğan announced that on July 24 Hagia Sophia, for a thousand years one of Christendom’s most storied and significant churches, will once again become a mosque. So far, the remnant of established Christianity has been silent. But this affront to the faith that is one of the pillars upon which the West was founded reveals how damaging has been the historical amnesia and appeasing double-standards that have compromised our response to the challenge of Islamic jihadism.

Until recently Turkey had been a poster-boy for the dubious globalist consensus that liberal democracy and free-market capitalism are the destiny of all humanity, including Muslims. In 1923 founder Kemal Atatürk created Turkey to be a modern Western nation-state, with religion separated from the secular government. He abolished the caliphate, closed Islamic courts, gave women equal rights in divorce and inheritance, allowed them to vote, restricted sharia to religion, and secularized education for females as well as males. In 1934 Hagia Sophia was turned into a museum, part of Atatürk’s program to recognize Turkey’s pre-Muslim history and strengthen Turkey’s modern global identity and prestige.

But over the years it took the military to maintain this modernizing, secular program in the face of the more traditional and conservative Muslim masses and their discontent. Starting as mayor of Istanbul in 1994, Erdoğan became their champion, and as president has abandoned Atatürk’s democratic, secular program: He has jailed more journalists than any other country, and built 17,000 new mosques. Nearly a century of efforts to reconcile Islam with liberal democracy are failing under Erdoğan’s incremental Islamization. Turning Hagia Sophia back into a mosque is an important sign of his success, and a gesture of defiance of the “rules-based international order.”

And it is a repudiation of the West’s belief that transforming Islamic majority states into secular liberal democracies, what we spent lives and resources futilely attempting to do in Iraq and Afghanistan, could defuse the materialist and political dysfunctions that the idealistic internationalists champions claimed created jihadist terrorism. This belief is a colossal failure of imagination, enabled by a refusal to take seriously the traditional doctrines, scriptures, jurisprudence, and behavior documented in 14 centuries of Islamic history.

One constant of that history is the totalizing role Islam plays in Muslim societies, and the depths of a religious fervor now nearly extinct in the Christian West, where Christianity has been driven from the public square, and relegated to private and, at holidays, commercial life. Contrary to our focus on material causes to account for historical and political change, as Bernard Lewis has written, Islam’s “most characteristic, significant and original political and intellectual responses [to Islam’s retreat before the West] have been Islamic. They have been concerned with the problems of the faith and the community overwhelmed by infidels.”

Given that religious focus, Lewis also writes, “In most Islamic countries, religion remains a major political factor,” for “most Muslim countries are still profoundly Muslim in a way and in a sense that most Christian countries are no longer Christian.” Given how secularized the West is, we discount faith and its doctrines and look for material, economic, political, or psychological causes of jihadist terrorism and violence, from the lack of economic development to justified anger over the West’s sins such as imperialism, colonialism and modern versions like globalism.

Moreover, our fashionable civilizational self-loathing leads us to accept these specious causes, even to the point of whitewashing Islam’s long history of violence in the name of Allah, and styling Islam, as presidents from both parties have done, as the “religion of peace.” This bad habit explains as well the relative indifference of Western politicians and clergy to Erdoğan’s announcement that one of the West’s most glorious and beautiful cultural treasures, already partially defaced by its first conquerors in 1453, will be turned into a venue for the faith that attacked, plundered, occupied, and enslaved Westerners for a thousand years, and continues today to slaughter and enslave Christians.

This dismissal of faith has also led to a double standard in the West’s responses to events. Addled by multiculturalism and its noble-savage fantasies of the exotic “other,” we strain out the Western mite and swallow whole herds of non-Western camels. Churches across Christendom are vandalized or demolished with scarcely a “tut-tut” from our political and ecclesiastical leaders. But let one mosque be defaced with graffiti, and passionate denunciations of “racism” and “Islamophobia” will fill the airwaves and bandwidth for days.

Similarly, scarcely a day passes when we don’t hear heated complaints about Israel’s “illegal occupation” of its traditional homeland as documented in historical writing, inscriptions, and archeological finds. But seldom, if ever, do we hear that for nearly 50 years Turkey has illegally occupied and colonized northern Cyprus, ethnically cleansing Greek Cypriots; destroying, looting, and vandalizing more than 550 churches; and refusing to this day to inform the Greeks about the fate of over 2000 of their compatriots who disappeared during the invasion.

Worst of all, we allow mosques to arise on Western lands and solicitously protect them, even as many are centers of jihadist recruitment and indoctrination. Germany alone has 2400, 900 of which are controlled by Turkey. Yet Saudi Arabia will not allow a single church on its territory, and punishes Christian evangelism with death. Other Muslim countries restrict, according to sharia law, the number and size of Christian churches, which are frequent targets of vandalism or destruction. Turkey continues to forbid new churches, though a few years ago it did allow a new church to be built––the first in 90 years.

Perhaps nothing illustrates this cringing double-standard as well as the continuing Arab control over the Temple Mount in Jerusalem. The holiest site of Judaism, it was strictly off-limits to Jews during Jordan’s occupation, as was the Old City. Forty to fifty thousand headstones from the Mount of Olives cemetery were desecrated, some being used to pave latrines, and 56 synagogues were destroyed.

Yet despite this record of destruction and contempt, after the 1967 Six Days War and Israel’s reconquest of Jerusalem, Israelis didn’t just let the two mosques on the Temple Mount survive, but allowed Arabs to maintain significant control over the Mount. Worse yet, in 1996 a new mosque and prayer hall was built below the Temple Mount on the remains of Solomon’s Stables, and during construction excavations thousands of precious artifacts from the as far back as the First Temple era were contemptuously dumped in the Kidron Valley along with excavation spoil. Israeli archaeologists for years had to sift from the mounds of dirt 1000 ancient objects like coins, inscriptions, building stones from the two temples, and tools.

Finally, this myopic and cringing double standard is manifested in the use of “imperialism” and “colonialism” as epithets to delegitimize the West and Israel, which in Arab propaganda is routinely characterized as a Western colonial and imperial outpost. This bad habit is particularly cringing, given Islam’s long record of imperial conquest, colonization, and occupation: At one point three quarters of the Roman Empire and over a third of what was then known as Christendom were occupied. From the beginning, as historian Efraim Karsh writes, Muslim armies “acted in a typically imperialist fashion . . . subjugating indigenous populations, colonizing their lands, and expropriating their wealth and labor.” And whereas Western imperial powers abandoned almost all their colonies and continue to aid those peoples in determine their own political destiny, the descendants of Muslim invaders, colonists, and occupiers continue to live and rule most of the territories they conquered centuries ago: all of North Africa, Syria, Egypt, Lebanon, Jordan, Iraq, Turkey, Iran––all except the last had been Greco-Roman and Judeo-Christian, i.e. proto-Western, for as long as nearly 3000 years before Islam even existed.

Which raises some questions: By what moral calculus do the imperialism and colonialism of the past in the West come in for constant condemnation and scapegoating for the rest of the world’s problems, while no one holds Islam and its colonial and imperialist sins to the same standards of judgment and accountability? Or why does the West’s history of brutal slavery remain an indelible stain on today’s Westerners, while Islam’s much longer and more brutal history of slavery, not just of Africans, but of millions of Europeans, is scarcely mentioned, though it continues to this day? Or why are the richest, freest women in the world defended by militant feminists against sexist “microagressions,” while in many Muslim countries, the misogynistic customs and laws, including polygamy, veils, genital mutilation, honor killings, and inequality before the law, are, when not just ignored, admired as exotic chic by ignorant Western activists?

Accepting a double-standard is always a sign of weakness, inferiority, and fear. We may think we’re just displaying our high-minded principles and cosmopolitanism, but our enemies know the score: We are displaying a civilizational failure of nerve, and a sordid materialism that will not let us risk our rich dolce vita lifestyle. Just like the current destruction of America’s history as expressed in statues and monuments, and just like the libelous revision of American history to legitimize an illiberal collectivist ideology and its impossible utopias, the shrugging off­­––with a few exceptions like Secretary of State Mike Pompeo­­––of Turkey’s conversion of Hagia Sophia into a mosque bespeaks a civilization that no longer is willing to defend and fight for its ideals, its history, its achievements, and its future.

The word for that condition is “decline.”

The War That Changed the Middle East

The Road to Nakba

The Destiny of the Middle East

The Destiny of the Middle East By Dr. David R. Reagan The Regathering God has…

Why There Is No Peace in the Middle East